You know what a saddle is, right? Seen enough western movies? Not that kind of saddle. In the world of land navigation, which is one of my favorite worlds, a saddle would be a dip between two peaks that may or may not also have lower ground visible in any direction away from those two peaks. Basically, one might imagine moving off of a peak, toward another peak to the front, but with easier immediate avenues of travel to the left or right, that may or may not be in the direction one has to move. The trick is in mapping a course that provides the best compromise between expediency and security. We, my friends, I think are in a market saddle. We know where we need to go. Getting there quickly and safely? Not so easy.

Equity markets sold off fairly hard on Wednesday in response to dire-sounding warnings made on Tuesday by President Trump, his medical team, and Gov. Cuomo of New York. We went over that yesterday. The selling picked up as the day wore on, as the many algorithms that now make up what passes for price discovery tried to price in this morning's (Thursday) weekly Initial Jobless Claims number. Was there any conviction in that pressure? I'm not so sure. Trading volume was indeed lower than it has been across the Nasdaq Composite, as well as the S&P 500. Trading volume was also substantially lower at both of New York's primary exchanges on Wednesday than it had been at higher prices during Tuesday's selling. That's actually a mild positive.

Another thing: The Dow Jones Industrial Average, the S&P 500, and the Nasdaq Composite, really all three of our most highly followed large-cap indices closed down 4.4% for the day. This signals a near complete lack of sentient reasoning behind the selloff.

The day was run by the "set it and forget it" crowd. Of course, moving beyond large-caps, the environment did get exponentially uglier, as indices measuring mid-cap prices fell between 5% to 6% and small-cap indices took more than a 7% pasting.

We did note here last week that we did not see the necessary trading volume that we needed to see in order to be convinced that the rally off of those lows was real. Well, now the "good news" would be that the volume to the downside is just as unconvincing. Those folks compelled to go to cash have largely done so, and there is a broad lack of conviction. Period. Fact is that there can be no conviction right now. One thing that sticks out for me, as an observer, would be that though we did witness a lightning quick, precipitous selloff, that maybe we still have not seen a panicked capitulation. Then again, in an electronic world, would we recognize panic in real-time?

We have all watched with amazement. For days now, the $20 level has stood there as support for WTI Crude futures (front month) market. We have also all seen the incredibly large inventory builds posted by the Energy Information Administration as demand has fallen off of a cliff. I think we as traders understand that should that $20 support crack, there will be a further pressuring of equity markets to be led not just by the energy sector, but also by financials and then followed by the wonderful world of passive investment.

Is there hope? Oil prices are higher on Thursday morning, as President Trump is known to have made overtures toward both President Putin of Russia and Prince Mohammed bin Salman of Saudi Arabia regarding their ill-timed price war ahead of the U.S. president's meeting this Friday with industry executives as the sector crumbles, and we see the very beginning of the end for some U.S. firms in the shale patch.

It is interesting to note Thursday morning that while I see futures pricing in a barrel of WTI Crude for May delivery trading at $21.76 this morning, up 7%, looking ahead, one barrel for June delivery will run the investor more than $25, September? $30. January 2021? More than $32. Yes, some "experts" have been talking about single-digit oil. That's not what traders are betting on. Truth be told, behavior across energy pricing may be as important to overall market direction from here as are the numbers related to employment.

What we learned on Wednesday was that the ADP Employment Survey has been finished too early in March to be relevant. The BLS data set for Friday will likely represent as similar. That leaves weekly Initial Jobless Claims, which are compiled by the Department of Labor from data that itself is provided by the individual states. This is the closest metric we have to a real-time unemployment number, and many economists are projecting something just as awful if not worse for this week's print than the nation saw last week, when 3.28 million folks filed for benefits in time to be included in that figure. I see numbers potentially as high as 4.5 million being thrown around by the economic community, with a few seeming to cling to the 4 million level. So brace yourself. No telling ahead of time how the algos will react to a shocking number.

The question is easy. Are equities cheap here? Well are they? There is a good chance that they are, with both the Federal Reserve, and the U.S. Treasury Department having been as aggressive as they have been in plugging holes where they see them in underlying financial systems, as well as in solvency concerns at levels ranging from large-cap corporate industry to regional to small businesses down to households. That is what is important here.

For we all speak of demand destruction. Many in the financial media who do not really have a deep cognitive understanding of some economic basics throw this term around because everyone understands it. The situation is far deeper than that. Should issues related to insolvency permit significant, lasting destruction to the supply side of the economy, there can be no recovery. You dig? Consumer and business to business demand are grand, but those who provide goods and services have to be there and ready to operate at a proficient enough level for the broader economy to show any velocity upon attempted recovery.

Interest rates will remain close to zero. There will likely be a furthering of fiscal support/stimulus that will include first some helicopter money, and then a job creating infrastructure spend. These will be debt fueled, but necessary actions that in the short-term will be positive. Longer term? We'll find out what the Keynesian multiplier really is as this new normal evolves.

Speaking of the new normal, supply chains will be reeled in. The era of globalization that brought with it expanded operating margins and cash flows has now been revealed as a remarkably dangerous way for any nation to live. That will have to change. This nation can never allow itself to be so vulnerable again. Suddenly, protectionist-style economists are not so backwards in their thinking. No, not at all. Who knew? (A lot of us knew.)

There will be more pitfalls. Statistics related to Covid-19 will get worse. The length of this mandated economic shutdown remains a question mark. The abilities of both monetary and fiscal authorities to make a positive impact through policy will be tested. There will be more and more firms that will have to reduce or cut dividend payments. Corporate repurchase programs will pass into the pages of history as firms try to maintain headcount without cash flow, and then tap the federal government for help.

About that supply side that needs to be there? Just how "there" can it be, as the expense of ramping up operations becomes reality. How "there" can it be three months, six months, nine months down the road? Will the consumer ever be willing to sit shoulder to shoulder in a theater or at a ballgame again?

So, I ask you ... are equities cheap? There are three answers. "I think so." "I don't know." "I don't think so." Without a relevant earnings history or meaningful guidance, the markets, as well as the underlying economy, are reliant upon a "White Swan" event. Silly? We didn't see the "Black Swan" coming, did we? In the meantime, we do see how quickly the earth can heal itself in spots when humans take a time out. How interesting.

Of a break-out? Former Sarge fave Zscaler (ZS) , who Sarge never should have taken profits on, is on the verge. Already way off of the recent lows. Too late? I have been trying to buy this name below the market all week to no avail, refusing to pay up for anything in this environment.

As more and more folks work from home, more and more of their employers scramble to improve their cyber-security capabilities. This is where Zscaler's ZPA (Private Access) product comes in as a replacement for what are known as VPNs, or "Virtual Private Networks." Zscaler CEO Jay Chaudry wrote back in a blog post back in mid-March (which I found at Investors Business Daily) that "Since Jan. 1, our overall traffic has more than tripled, driven in large part by existing customers fully taking advantage of ZPA: our China traffic has increased more than 12 (times); Seoul is up 6 (times); Tokyo has more than doubled; and our newly opened Milan data center quickly became one of the busiest sites across the Zscaler cloud." 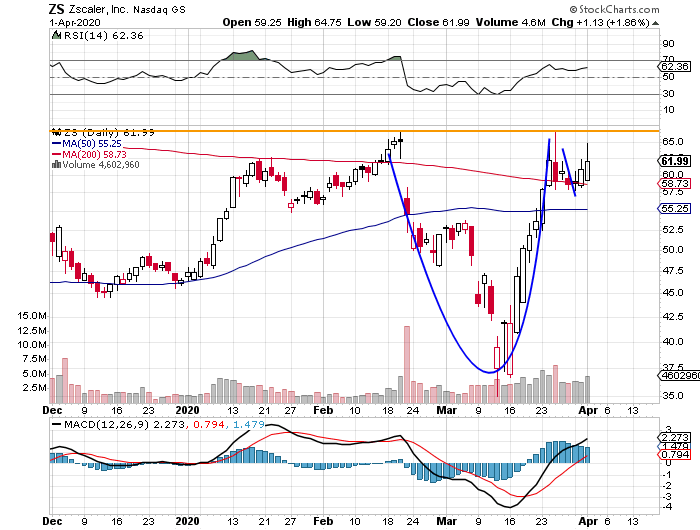 As readers will note, it is the peak on the right side of the cup that counts, as the stock rebounds off of that handle that is actually a little deeper than it appears at a glance. For the moment at least, both Relative Strength and the daily Moving Average Convergence Divergence for Zscaler look to be in much better shape than pretty close the entirety of stocks in our universe right now.

The pivot for ZS is the $66 level, so we are not quite there just yet. A take and hold of $66 could set up a move toward something close to $80. I do want the shares. That said, at this point I wait for either a discount, or momentum provided by a technical breakout above $66.

What I don't want to do is pull the trigger on the wrong side of the pivot, as this spot could provide resistance just as easily as act like a catapult. Better, in my opinion, to wait for improved probabilities for success than go for the more dramatic gains.

Get an email alert each time I write an article for Real Money. Click the "+Follow" next to my byline to this article.
TAGS: Fundamental Analysis | Investing | Markets | Stocks | Technical Analysis | Trading | World | U.S. Equity | Coronavirus