JetBlue Airways Corp. (JBLU) has roared back to life in recent weeks, doubling in price since the middle of May. The shares have performed more like a helicopter than an airplane. Jim Cramer talked about  JetBlue along with other airline stocks on Real Money Monday.

Let's check out the charts of JBLU to see if air traffic control or any stock traders need to pay attention to any chart points.

In this daily bar chart of JBLU, below, we can see that prices lost about two-thirds of their value from February to around the middle of March. So much worse than losing your luggage. Prices rebounded in late March and then made a quick and successful retest of the March low in early April. The shares traded sideways for a few weeks but fresh strength can be seen from the middle of May. Prices doubled and touched the underside of the declining 40-week moving average line.

Trading volume has been heavy, which tells me we are seeing a lot of new buyers. If they are institutional buyers I am not worried but if they are smaller retail buyers we could see a correction in the days ahead. The On-Balance-Volume (OBV) has been strong and that is bullish as it both confirms the price gains but tells us that buyers are more aggressive. The Moving Average Convergence Divergence (MACD) oscillator is above the zero line and that, too, is bullish.

In this weekly bar chart of JBLU, below, we can see how the $16 area acted as important support for many months. Now that prices have rallied back toward the $16 area it would not surprise me that some traders might be looking to "get even" and look to sell their JBLU longs in the $16 area. Just human nature. The shares have rallied to the underside of the declining 40-week moving average line.
The weekly OBV line has made a new high for the year and the MACD oscillator has crossed to the upside from below the zero line for a cover shorts buy signal.

In this first Point and Figure chart of JBLU, below, we used daily price data to construct the series of X's and O's. The chart shows a potential upside price target in the $16 area. It also shows a lot of potential resistance from $16 up to the $21 area. 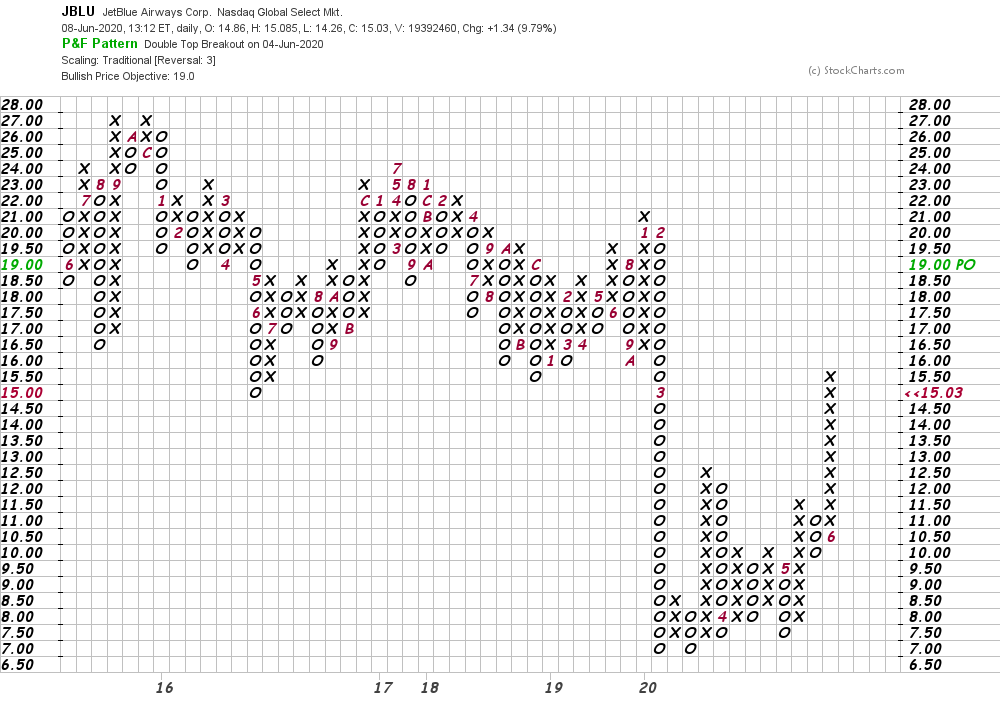 In this second Point and Figure chart of JBLU, below, we used weekly price data. Here the chart suggests a longer-term price target in the $31 area. 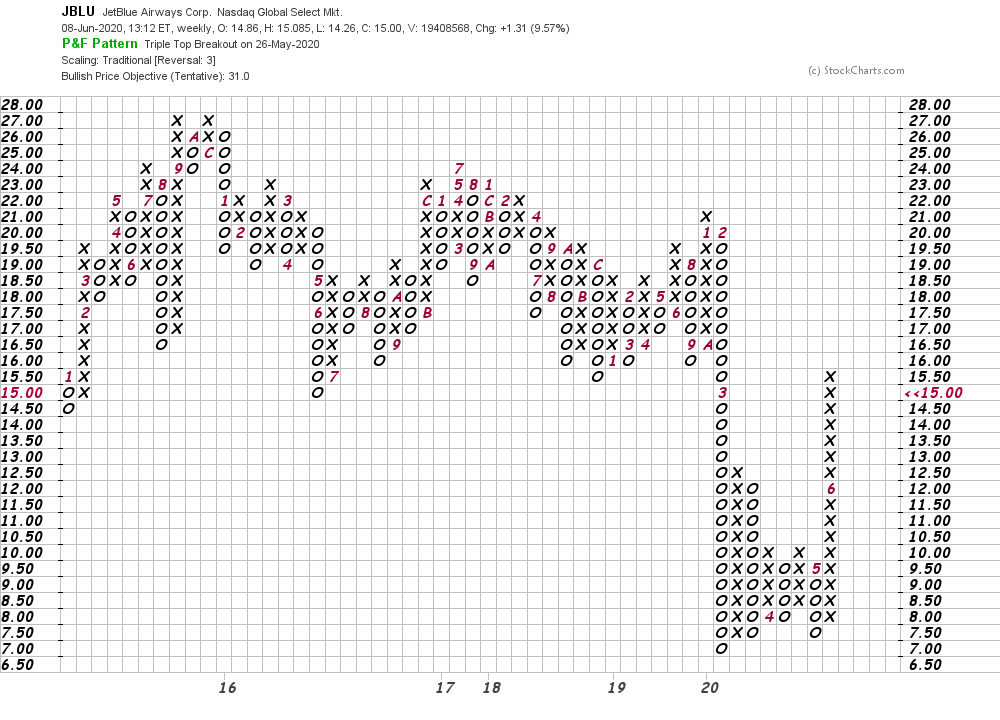 Bottom-line strategy: After JBLU's recent rally it would not be unusual for it to trade sideways to consolidate those gains. This sideways/corrective price action could take a few days or even a few weeks. If trading volume is light during this sideways movement the assumption is that traders are largely holding their existing long positions. That would be positive. Traders could go long on weakness provided that they have a stop point just below $12.
Get an email alert each time I write an article for Real Money. Click the "+Follow" next to my byline to this article.
TAGS: Investing | Stocks | Technical Analysis | Airlines | Transportation | Real Money