Monday was a strong day for our equity marketplace. Perhaps even stronger than you realize, technically. I will get into that. Yet, at least overnight, equity index futures are trading below fair value as European markets pause themselves.

There had been a real appetite for stocks ahead of earnings season, ahead of some key macroeconomic data points set for release this week, and ahead of several high-profile marketing events launched by "mega-cap" tech names and their competitors that got underway as early as today (Tuesday). To be fair, one could say that our market's broadest measures, the S&P 500, as well as the Nasdaq Composite are both indeed closing in on conditions that some might technically term as short to medium-term overbought.

Not so fast, my friends.

The news that broke on Monday night, according to a report by STAT News, had to do with Johnson & Johnson's (JNJ) current 60,000-participant Phase 3 clinical for its Covid-19 vaccine candidate. The short of it is that the trial (as well as recruitment) has been paused due to an unexplained illness in a participant. The company confirmed the pause but did emphasize that adverse events are expected in large clinical trials such as this. Johnson & Johnson also stresses the difference between a "pause" and a "clinical hold," which is regulatory and can last considerably longer than a pause.

The plan at this point is to convene an independent committee. Along those lines, the DSMB (Data and Safety Monitoring Board) met on Monday evening to review the case. Most readers will recall that after a participant in the U.K. in the trial for the vaccine candidate currently under development by AstraZeneca (AZN) and Oxford University became ill with what was believed to be "transverse myelitis" early last month, those trials were paused around the world. That study has now resumed around much of the planet, but remains "on hold" here in the U.S. By, the way, Johnson & Johnson also reported quarterly financial performance on Tuesday morning.

I know. There were other signals. I was a little slow to make the call, but I am careful in that way. I do after all, act for myself and write about my thoughts for public consumption.

The action on Monday was plain to see. The recent rally carried on. Breadth was impressive at both of New York's primary equity exchanges. Technology-based stocks, and tech-heavy indices led the way, but the rally was broad. Tech was led from within by hardware, and hardware was led by Apple (AAPL) . Internet stocks that mostly fall under communications services roared as well, led by Twitter (TWTR) , and Facebook (FB) . Where would you place Amazon (AMZN) ? In Big tech? With other internet names? With the broadline retailers, making the stock a consumer discretionary? No matter what you do with it, the shares jumped 4.8% for the day. Huzzah.

In fact, 10 of 11 sectors traded higher, as did just about every one of our narrower, or subordinate equity indices. My focus here is on the Nasdaq Composite. That index popped 2.6%, as trading volume increased significantly from Friday to Monday -- not just in aggregate for constituent members of that index, but also for all names listed at that exchange.

Think about that for a second. Monday was a federal holiday. Banks were closed. Bonds did not trade. Trading volume in equities, by all rights, should have been thin. Very thin. Instead, shares were bought aggressively on surprisingly heavy trading volume. This is what I needed to see. I know the Dow Jones Industrials have been sending us signals for almost two weeks now. The fact is that the DJIA is but 30 stocks. Too insignificant to use for making broad calls on market trajectory.

Now, that we have confirmation from the Nasdaq Composite, which is one of the two market measures that really count (S&P 500 being the other), I think we can say that equity markets are indeed back in what I would consider an uptrend. Confirmed. The nature of the flow of capital has changed and portfolio managers have evolved from emphasizing preservation of capital to redeployment of those funds.

Does that mean that I am all in? Of course not. I am never all in or all out. I lean with a bias. That way, I tend not to get my face ripped off when I am wrong. We are still stuck in the middle of an economic activity-suppressing pandemic. This is still October. October is scary enough without contentious elections attached. How the election plays out will impact allocation.

That said, the Nasdaq has just given us the "thumbs up", and the S&P 500 is darned close as well.

Actually a double heads up. For shoppers, it has already been "Prime Day" at Amazon (AMZN) since midnight, and the event runs through Wednesday, technically making the number of days involved plural. Christmas in October? You know it.

Experts are still looking for year-over-year growth in holiday-related shopping, even this year. Whether or not we see growth outright remains to be seen, but I would think it is safe to say that an unprecedented portion of this shopping will be done through online means, and this is the start of the holiday season. Like it or not.

Crowds on Black Friday? Not for those with measurable IQs. The competition "gets" this. Walmart (WMT) , Target (TGT) and Best Buy (BBY) are all holding e-commerce events of their own this week.

Still in the "heads up" department, Apple (AAPL) will hold its "Hi, Speed" 5G-capable iPhone launch event this afternoon. While both pricing and actual availability could be issues that possibly raise concern across several models, I would not be surprised at all to see something launched today along with those iPhones just to up the "Oohs and Ahhs." Smart speakers, New Apple TV box. I don't know. Something. Apple held a launch event in September, and already has one scheduled (supposedly for new Mac computers) for November. As a shareholder, one must appreciate the sheer aggressive nature of the company under Tim Cook.

1) Cowen analyst Oliver Chen's Monday commentary on Walmart (WMT) ? Long story short, Chen, who is highly rated at TipRanks, sees advertising on top of the growing e-commerce platform at Walmart. Chen views advertising as potentially a $3.4 billion business by fiscal 2023, while reiterating his "Outperform," and increasing his price target to $160 from $150. My price target, for now, remains $151. The shares briefly kissed that level in early September prior to selling off.

2) The Walt Disney Company (DIS) announced a corporate reorganization after the closing bell on Monday afternoon. The company will now rearrange all media and entertainment divisions into a single organization that will be responsible for content distribution, advertisement revenue, and Disney+. To put it plainly. with almost all of Disney's businesses under pandemic-induced pressure, the focus has to be placed upon content and content distribution. The priority or focus of this content creation, and what to do with it, appears to favor the direct-to-consumer (streaming avenues such as Disney+, Hulu, and ESPN+) over legacy (cable, cinema) outlets. The stock is trading significantly higher overnight. 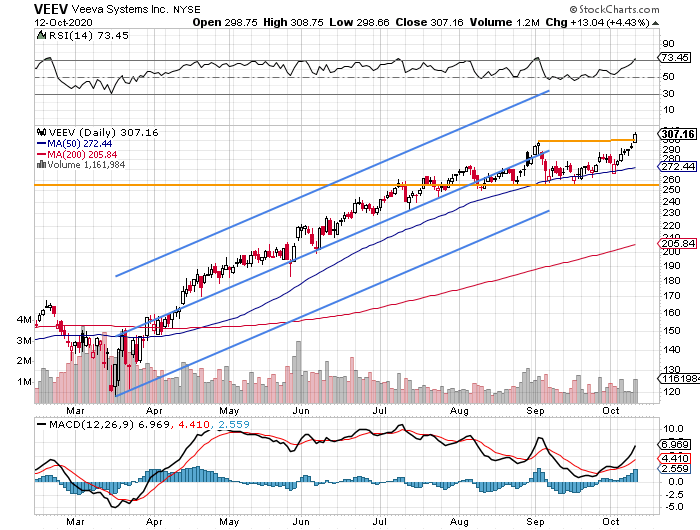 Readers will see the stock's trend broken in early September. Then, we have a basing pattern that lasted more than a month, where $298 support was tested several times going back to August. On Monday, VEEV retook those Sept. 2 highs and closed at the top of its range for the day... wait for it... on heavy trading volume.

This stock is known for volatility, so it is not time to throw confetti in the air, but it is time to watch for a retest of that level. Should the $298 level hold in what could be a negative tape, my new price target becomes $357.

Warning: I have liked, and am long this name for quite a while. I warn only because my $357 target price is way above the rest of Wall Street on this name. Am I capable of personal bias? We all are. I do have a solid track record on this one though. Rock on.

Get an email alert each time I write an article for Real Money. Click the "+Follow" next to my byline to this article.
TAGS: Earnings | Futures | Indexes | Investing | Markets | Stocks | Trading | U.S. Equity | Coronavirus