If you have ever driven on a major highway, you cannot miss the trucks of J.B. Hunt Transport Services (JBHT) . Let's check out the charts and indicators of JBHT to see if they are showing any leadership for the transportation industry -- Charles Henry Dow would like to know.

In this daily bar chart of JBHT, below, we can see after a steep decline in early April that prices traded sideways. Prices made lows in June and October and a rally in August. The recent advance from the October nadir has not broken above the August peak, so we are still in a neutral trend. We need to make a higher high to get excited about this stock.
The On-Balance-Volume (OBV) line has strengthened from September and that is a positive, while trading volume has increased since September. JBHT has crossed above and below the moving averages several times since April. The Moving Average Convergence Divergence (MACD) is above the zero line but correcting since the middle of October.

In this weekly Japanese candlestick chart of JBHT, below, see a positive-looking picture. Prices made a strong rally from early 2020 and then the past year looks like a large correction to that initial advance. Prices are trading above the bottoming 40-week moving average line. The candles show two upper shadows around $190, telling us that traders have rejected that area. The weekly OBV line is in a large sideways move but very close to making new highs for the move up. The MACD oscillator is crossing the zero line for an outright buy signal.

In this daily Point and Figure chart of JBHT, below, we can see an upside price target in the $194 area. A trade at $175.22 could weaken this chart. 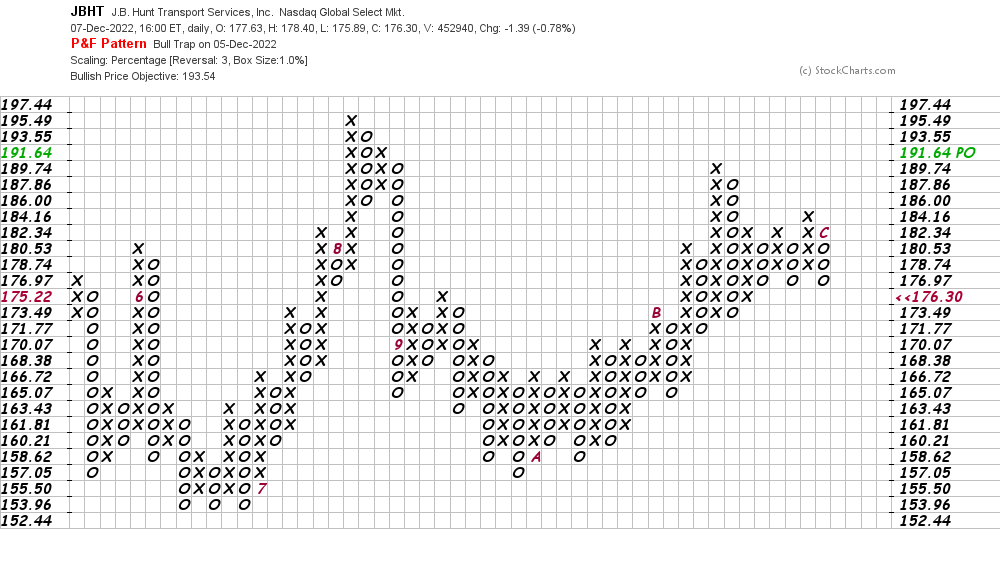 In this second Point and Figure chart of JBHT, below, we used weekly price data. Here we see the same $194 price target. 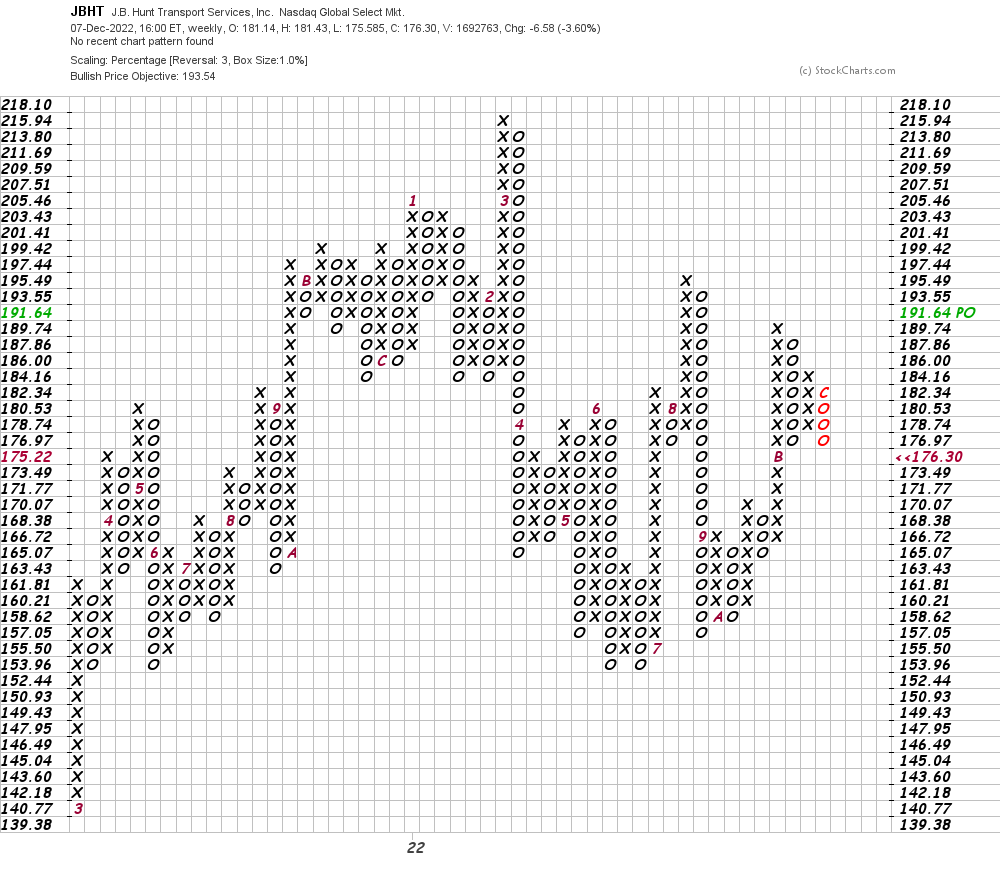 In this third Point and Figure chart of JBHT, below, we used weekly price data with a five-box reversal filter. Here the software projects a price target in the $362 area. 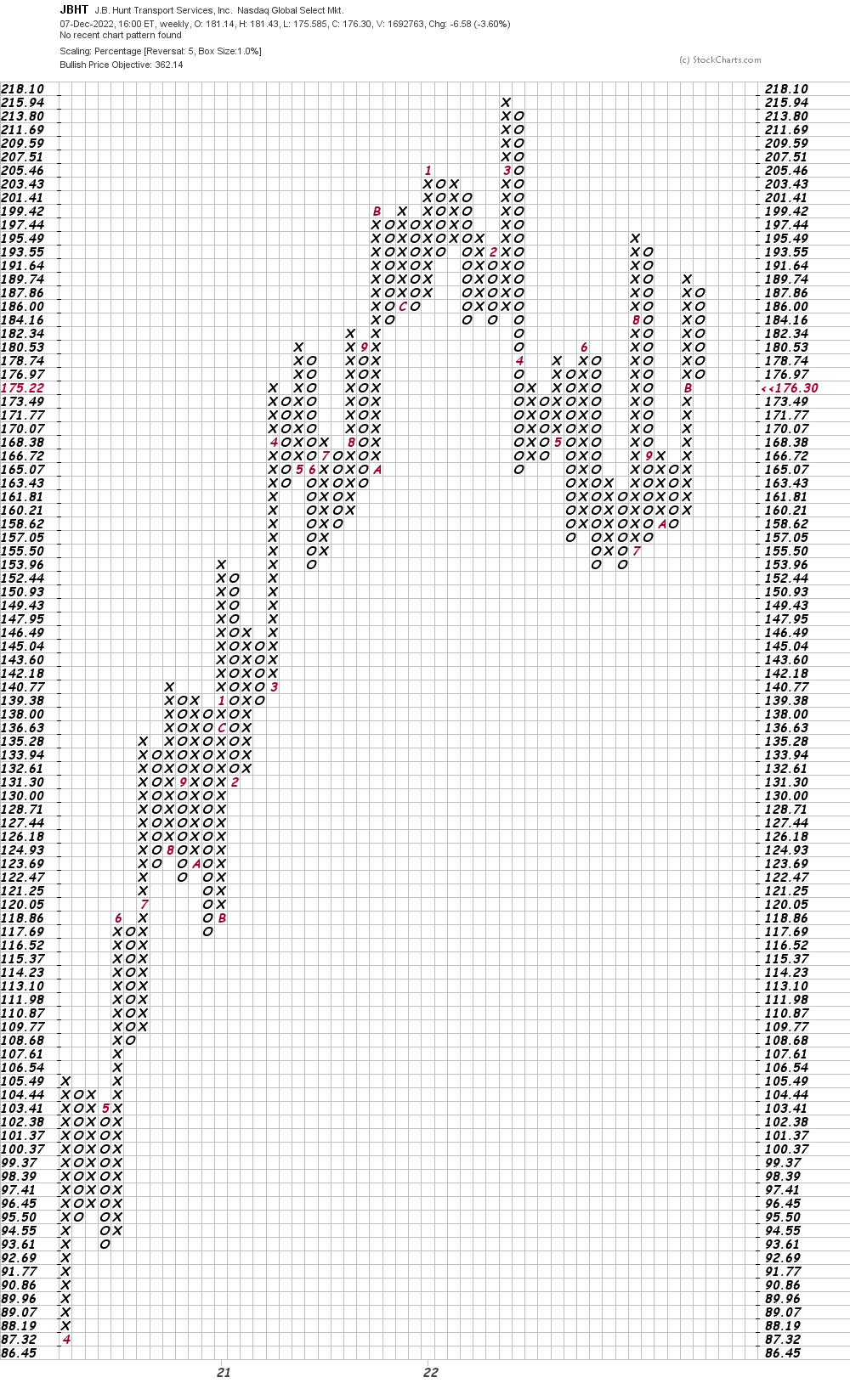 Bottom line strategy: JBHT has been building a base since April, but I do not think that prices are ready to launch a sustained upward move. More sideways movement is anticipated for a few more months. Defer purchases for now.
Get an email alert each time I write an article for Real Money. Click the "+Follow" next to my byline to this article.
TAGS: Stocks | Technical Analysis | Transportation | Real Money | Investing