Early Tuesday morning, one day after the Labor Day holiday. Many, including myself, spent the weekend in thought. Does the Softbank "Whale" story really explain this? Probably not alone, but the behavior described may have been broader than realized, and that behavior creates repercussions. Massive and perhaps undeserved valuations create large crowds that congregate in rooms that have not changed in size, nor grew more exits as they filled to capacity.

Still, we do know that due to current monetary conditions as well as fiscal conditions that could exaggerate further, valuation should be stretched relative to historical norms. Does that make sense? I hope so. Those are my thoughts.

I have not stopped believing in tech nor in the concept of being able to work from anywhere or across multiple locations simultaneously. It may not feel right, but opportunity only knocks when it knocks. Is this opportunity? Can I let you know down the road a little bit?

Slack Technologies (WORK) will report fiscal second-quarter financial performance after the closing bell here on Tuesday. Consensus opinion is for a loss of $0.03 a share. That would be versus a loss of $0.71 for the second quarter of 2019. Revenue is expected to land a little above $209 million, which would be good for year-over-year growth of roughly 44% if realized.

Interestingly, among the 20 or so sell-side analysts who follow the stock, there is nary a soul below $207 million or above $215 million. What does that mean? It means they really have a handle on Slack's performance for the quarter or they all copied each other's work. Oh, of those 20 individuals, 14 have increased their estimates for quarterly revenue while only one went the other way at some point while the quarter was ongoing.

What's more important to a stock such as Slack than earnings and revenue? Easy one, Steve: It's guidance. Correct.

But what kind of guidance? Anyone? You in the back. Ahh, yes. Good answer. Recall if you will that shares of WORK rallied into their first-quarter release three months ago, on June 4. Slack increased full-year guidance at the time for both the top and bottom lines. The stock immediately sold off hard and has traded sideways (at least) ever since, despite the competition from Zoom Video (ZM) and Microsoft (MSFT) Teams, which are having a great summer.

Why? At least to some degree because Slack withdrew its outlook for "Billings" due to uncertainties around the Covid-19 pandemic. This was not a mistake. While there has been increased demand to be able to work from anywhere, a significant number of companies have had trouble paying their bills. In addition, about 25% of Slack's customer base is derived from smaller companies. By smaller, I mean less than 100 employees.

What We Need to See

We need to see significant billings growth. The street is looking for $230 million to $240 million for the quarter. You get this number with some restated guidance and you may have a ballgame. We also need to hear something, anything, in regard to defending itself from the competition, which is obviously not a bunch of shrinking violets. 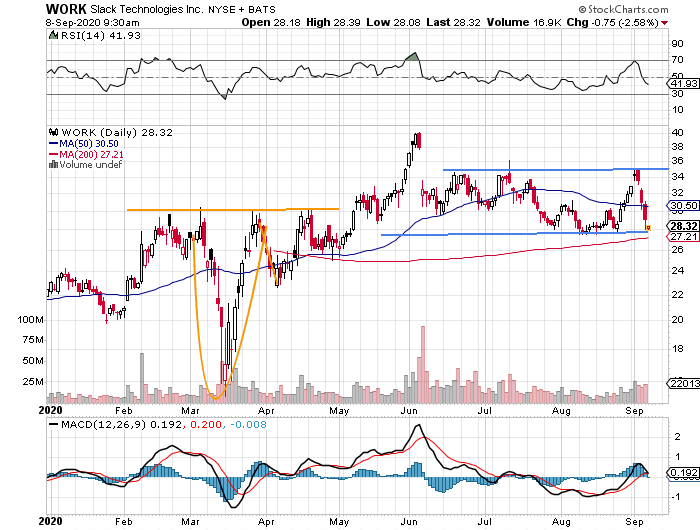 Clearly this name has based since selling off after its first-quarter results. This kind of basing pattern is called a consolidation. The problem, or perhaps the opportunity here, is that these shares are testing not only the lower boundary of this base going into earnings, but also are closing in on the 200-day simple moving average (SMA) at $27.21.

I think I like this set-up. This is what I am going to do ahead of earnings, but only after you read this (or at least have had the chance to).

Note: The sale of the covered call reduces net basis by the price of the premium received. The only risk in selling a covered call such as this is in opportunity cost should the shares rise in price beyond that strike ($35) by this Friday.

Get an email alert each time I write an article for Real Money. Click the "+Follow" next to my byline to this article.
TAGS: Investing | Options | Stocks | Software & Services | Technology | Real Money | Earnings Preview