I'd like to share some anecdotes with you. When the futures were up in the early morning Tuesday, and I tweeted out that the Fear and Greed Index was at 86 and the put/call ratio was the lowest in almost two years, I was bombarded with people telling me that sentiment didn't matter and we were going up through the end of the year.

I was given all sorts of wild targets for the S&P 500. But, mostly, I was being schooled in sentiment -- since I clearly did not understand it well enough....

I had watched guest after guest on television the day before on Monday evening spout bullish arguments as to why the market was going higher. I admit, I only saw the phrase "melt up" used once, but it sure felt as though we were kissing giddy sentiment.

Then the market spent the rest of Tuesday chopping and guest after guest on television muted down their bullishness. Now they started to cite sentiment as a reason we should pull back. Sentiment was giddy on Monday night, but none of them saw it until we stopped going up. Now, of course, they are all on board with a pullback, because of, well, sentiment.

So let me talk sentiment with you one more time. I will begin with a reading that was literally off the charts. The ISE Call/Put Ratio was 238%. Let's stop and let me explain this. It is a call/put, not a put/call, so a low reading is bullish and a high one is bearish. Thus, 238% means an awful lot of calls relative to puts were bought. That's a lot of happiness.

The last time we saw a reading over 200% was Sept. 18, 2018. We all know what occurred in October. But let me also point out that there was a high reading in the summer of 2017 and we didn't collapse, we barely corrected. The point is how long it has been since we've seen a reading over 200% and now we have one. That's the shift in sentiment.

Then there is the 10-day moving average of the put/call ratio that is quite low. Sure we can keep going up without a correction, but this chart says you're going against the odds.

The Investor's Intelligence bulls did not get as high as I thought they would, but they are high. They are back to 57.1% -- which makes them over that 55% area, and now the highest since mid July when they were 58%. 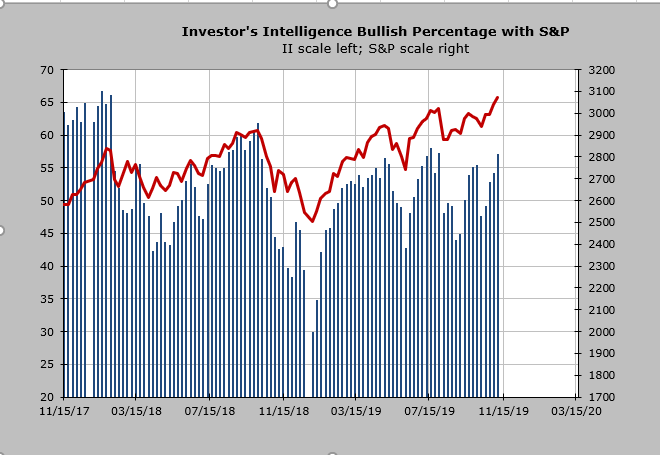 Away from sentiment, a few weeks ago there was a lot of discussion about volume and I pointed out that low volume rallies were bullish. It was once the volume began to rise you had to fret. The 20-day moving average of New York Stock Exchange volume bottomed last week and has been on the rise for a few days. Peaks in the volume's moving average have tended to coincide with lows in stocks and vice-versa. Think of this as a form of sentiment, when folks finally get bullish, the volume starts to rise.

I will be curious to see how quickly folks turn cautious, should we correct or chop.