If you're wondering what it will take to turn sentiment more bullish and instill a little fear of missing out into the folks on the sidelines, my bet is Thursday's after-hours price action was just the ticket. Because while the regular session was pretty good, with the Invesco QQQ Trust (QQQ) gaining another 1% and the SPDR S&P 500 ETF (SPY) rising by around 1.25%, it was the late-day surge in shares of Amazon (AMZN) that likely sent underinvested traders into an afternoon frenzy.

I've seen several people who are critical of AMZN's stock rallying more than 13% on the back of numbers that, while good, may not be great. Frankly, that's not a concern of mine, because what many investors fail to appreciate is that it is the market's reaction to the news (and earnings) and not the actual news that matters most -- at least in the near term. 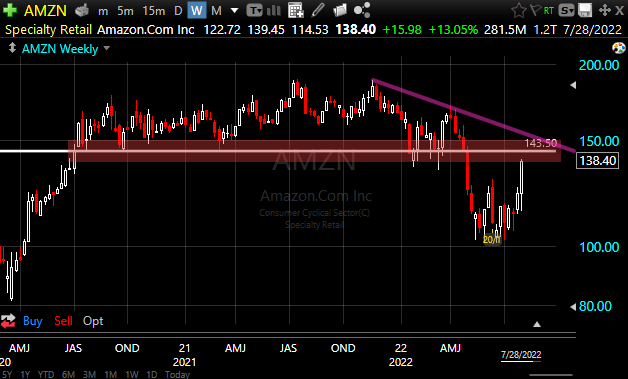 Take a look at the weekly chart of AMZN. As a trader, I'm only interested in how the stock reacts around $143.50 and as it tests its downtrend line. I drew a box around that $143.50 level because as much as I'd like to start and stop at precise points, that's not real life. The stock is entering an area of expected supply, and now we wait to see if the stock trades sideways and consolidates its gains or rolls back down toward $125. If I were a betting man, I'd look for any lingering upside momentum to peter out toward $150.

Moving on to the Nasdaq, the earnings-related weakness in shares of Intel (INTC) and Roku (ROKU) had zero impact on the after-hours performance of QQQ. While not apparent on the chart below, QQQ tested resistance at around $314.50 shortly after AMZN reported its earnings. 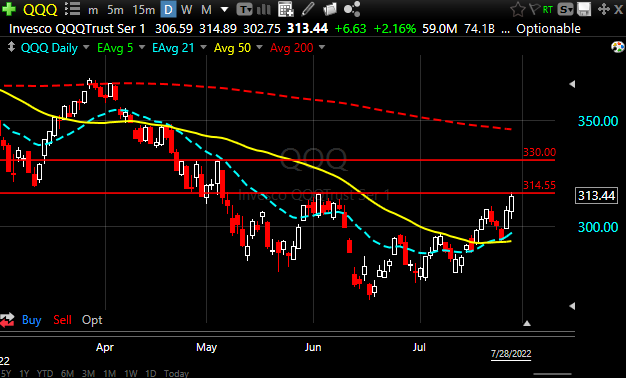 From a trading perspective, I would expect folks who bought QQQ as it broke above its 50-day simple moving average (SMA) on July 19 or as it tested that SMA on July 26 to have been incremental sellers into $314.50 Thursday evening. That said, there's nothing in the price action to suggest QQQ can't continue to push toward $330 and the 200-day SMA.

To keep the momentum moving in the right direction as we head into the weekend, the bulls don't want to see a pullback any deeper than about $307 to $305 during Friday's session, so for now, that's the zone intraday dip buyers should have marked on their charts.

When the Market Hands You a Lemon, Make Lemonade Out of It

Look what happened with G-III Apparel. If you're holding the stock, I've got a plan for what to do next.