By TIMOTHY COLLINS Aug 12, 2019 | 01:15 PM EDT
Stocks quotes in this article: VIAB, CBS, NFLX, DSNY, AMZN, CMCSA
The third time is the charm. After 13 years apart, Viacom ( VIAB) and CBS ( CBS) appear to have reconciled their leadership differences and will once again tie the knot.
This is less a longing for one another than it is a move caused by survival instinct. What we are witnessing in the media industry is parallel to the NBA strategy of creating a team of two or three superstars. Netflix ( NFLX) brought in the first non-traditional competition media saw in decades. Recently, Disney ( DSNY) pushed it over the top with its purchase of Fox. Now, the remaining media "free agents" need to combine to field a competitive team of properties.
Combining CBS TV, Showtime, MTV, Nickelodeon, Paramount movie studios, and Simon & Schuster might not quite match Disney, but the CBS/Viacom tie-up has enough media outlets and content to garner consideration for users.
The aspect of movies from Paramount along with books from Simon & Schuster creates an intriguing prospect for the combined companies: Content. A lot of content. Having the ability to draw from both books and movies could allow CBS/Viacom to produce original content in its own streaming service under the CBS TV brand or even Showtime.
It's clear we are barreling toward a la cart streaming between Disney Plus, Netflix, whatever CBS streaming becomes, and other content providers like Amazon ( AMZN) Prime. How about an Amazon Prime plus Comcast's ( CMCSA) NBC Universal tie-up soon? Will it happen? Probably not, but what fun we could have if it did happen.
Suddenly, the big media companies would become a big 4 for streaming instead of a big 4 (ABC, NBC, CBS, and Fox) network television.
The CBS/Viacom merger appears to fit in between Disney Plus and Netflix. Disney's focus is tilted toward family friend, while Netflix has a darker, more adult path.
With the Nickelodeon property, CBS/Viacom will have "SpongeBob," "Paw Patrol," "Teenage Mutant Ninja Turtles," and the recently acquired "Garfield" -- the most syndicated comic strip in the world -- the company can still take aim at kids. And with CBS and Showtime, there's plenty of available family and adult content.
Since Viacom shareholders will be receiving .595 shares of CBS, technical views should be directed at the chart of CBS, rather than Viacom. Unfortunately, for Viacom holders, that isn't a good look. Last week, CBS shares fell beneath the support trend line of the wedge pattern, which dates back to Christmas 2018. This pattern formed after a drop in the stock price from 2018 highs, so it could easily be deemed a bearish wedge. While last week's close was the first below support, this week's action is most critical. A close under $50 confirms the bearish break and trades should start looking toward a test of $45.
Confirming the price break, we see bearish crossovers in both the Chaikan Oscillator as well as the Full Stochastics. Add in the StochasticsRSI moving into oversold territory, and my concern grows. When the StochRSI moves below .20 in November, action turned ugly for several weeks to follow.
In other words, I'm not in a hurry to buy CBS or Viacom at these levels. I may get interested 10% or 15% lower, but the entire media space looks tired at the moment. I'd remain cautious. 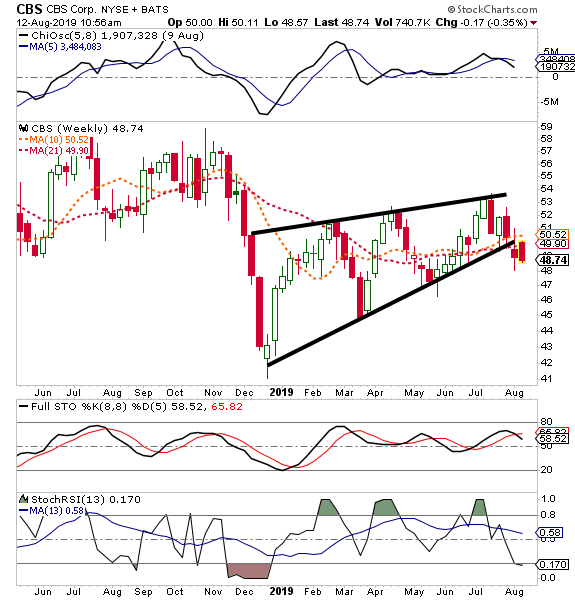 Get an email alert each time I write an article for Real Money. Click the "+Follow" next to my byline to this article.
TAGS: Entertainment | Mergers and Acquisitions | Investing | Stocks | Digital Entertainment | Stock of the Day