We'll begin with the very short-term Daily Sentiment Index (DSI) for the Volatility Index, which got to single digits -- nine -- last week. That is usually rectified by a move up in the VIX, so I would expect to see a bout of volatility this week.

The American Association of Individual Investors bulls have backed off from that extreme high reading two weeks ago -- the highest since January 2018. It's the bears I have my eyes on. I like to watch the four week moving average, which is not yet extreme, but heading there. It has moved from 45% to 28% in a few short weeks. 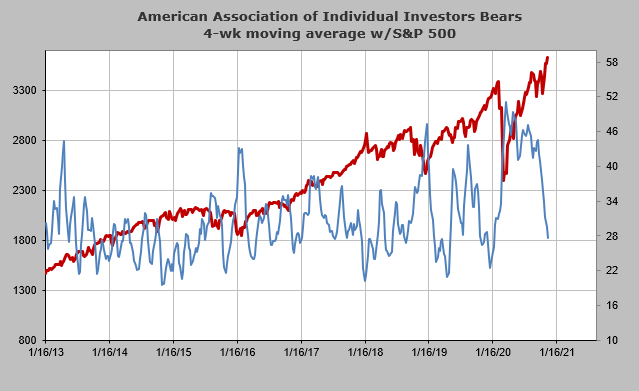 The Citi Panic/Euphoria Model is back to the late August highs. 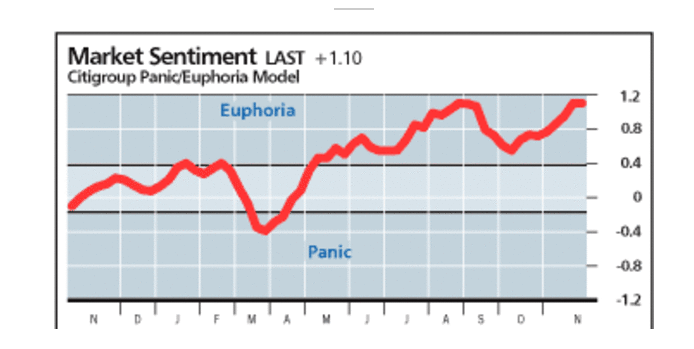 All the various put/call ratios are low, with the 10-day moving averages now scraping down near their lows, even the total put/call ratio is getting down there.

The National Association of Active Investment Managers (NAAIM) Exposure Index remains at 106, which is historically high for them. In addition my Saturday Twitter poll, which I grant you is wholly unscientific but has been a decent contrary indicator for the week ahead, has flipped from last week. A week ago 46% were looking for upside while 54% favored the downside. This week 54% favor more upside while 46% favor more downside.

Results from our Saturday Poll.
Thanks everyone for participating and thank you @Pointedmacro for charting it for us.https://t.co/lMIMBujYHL pic.twitter.com/3Dr3URpoBX

I would also note that the CNN Fear and Greed Index is at 92. In January it got to the upper 90s, so I suppose there is still room, but suffice it to say over 90 and it's not as though there is a whole lot of fear in the market. On Nov. 2 this stood at 24.

But the real jump last week was the Investors Intelligence bulls who not only scurried over 60%, but leapt to 64%, which is the highest in almost three years. I looked back at the last two times we saw the bulls get this high.

As we headed into year end 2017, the market was excited about the upcoming tax cuts (passed late December that year). The bulls first jumped over 60% in early November (blue arrow on the S&P chart). We had a minor two percent correction before sprinting upward 10%.

The breadth was good then (not as good as it is now). You can see the McClellan Summation Index was on the rise. But in early January it faltered yet the S&P kept on cranking higher, almost another 100 points, but the failing and subsequent rollover of the Summation Index (breadth) was the tell that sentiment finally mattered. The S&P promptly fell 10% in a matter of days.

In early 2017, we saw the Investors Intelligence bulls jump to 64% (arrow on the chart). The S&P 500 rallied for three more weeks before it corrected.

Here, too, the Summation Index was moving upward. It began to roll over about a week before the S&P corrected.

Right now the Summation Index would need some very weak breadth days to roll over. That's what I will be watching for because giddy sentiment is problematic when breadth is poor.