I had been asking around of late. About Ulta Beauty (ULTA) . The impression I was left with was that nobody shopped there anymore. It would appear that the small sample size of my survey may have left me with the wrong impression. The firm went to the tape with their third quarter financial results on Thursday evening. Adjusted earnings per share surprised to the upside at $2.23, growth of 3%. Sales, at $1.68 billion, did miss consensus view by just a smidgen, but that was still good enough for 7.9% yearly growth.

The revenue print was not the only disappointment. Operating margin hit the tape at 10%, down from 10.8% a year ago, despite growth in gross margin from 36.8% to 37.1% over the same period, partially due to business investment both in growth and labor. That, however, is not the story today.

The deal is this: Comp sales showed a rise of 3.2% vs. industry expectations of 3.1%. This growth was driven by a 2.3% increase in the number of transactions, and a 0.9% rise in average ticket. For the record, ULTA includes stores open at least 14 months and e-commerce sales in what are considered to be comparable.

Honestly, this quarter, though not bad, is the slowest in term of both earnings and revenue that Ulta has seen in many years. Earnings growth itself has decelerated substantially for three consecutive quarters. In addition, let's not forget that LVMH Moet Hennessy-Louis Vuitton's (LVMUY)  Sephora targets the high end of the beauty business, while E.L.F. Beauty (ELF)  also competes in the brick-and-mortar space. In addition, though, I honestly could not pick her out of a line-up, Kylie Jenner' and her sale of 51% of Kylie Cosmetics to Coty (COTY) will not harm sales of those skin care products at Ulta, we are assured. That threat will, however, be out  there, one might think, in the future.

How Pretty Is the Chart? 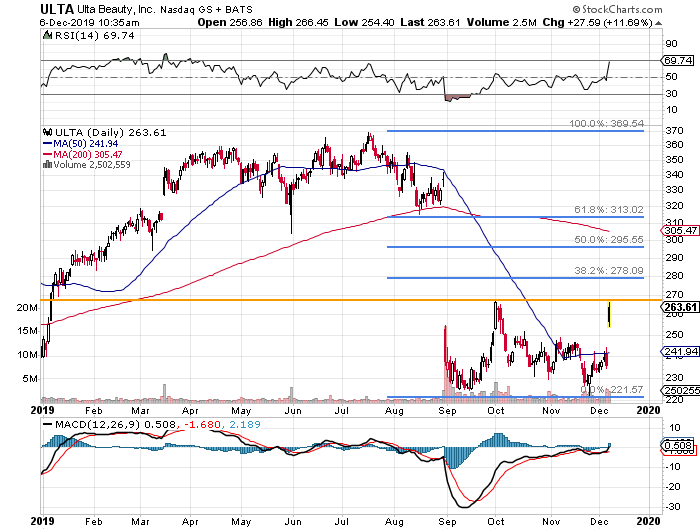 While our favorite 12th century mathematician might suggest that these shares could rise as far as $278 prior to hitting traffic, unless the shares make another attempt at the Friday highs, they do appear to have stalled at precisely the spot where resistance had been found in late September and early October.

I've got to say, I am more likely to short this rally in entry level size than I am to jump on this rally on the long side.

Get an email alert each time I write an article for Real Money. Click the "+Follow" next to my byline to this article.
TAGS: Luxury Goods | Investing | Stocks | Food & Staples Retail | Stock of the Day