Forty-billion could buy a lot of companies, roughly all but 250 currently trading on the U.S. markets. All right, that doesn't allow for much of a premium for another 15 to 20 companies, but the size of the Microsoft's (MSFT) buyback announcement is massive, and yet, it's not.

That same $40 billion is buying back less than 4% of Microsoft shares at the current price. When we add in the increased dividend, Microsoft shareholders will get another 1.4% in yield. Blended together with the buyback, shareholders have the potential to grab around 5.1% per year.

Potential is another key here. In the fiscal fourth quarter, Microsoft returned $7.7 billion to shareholders via buybacks and dividends. Annualized that amounts to only a 2.9% blended return. Buybacks make for splashy headlines, but time frame to completion is seldom discussed. Furthermore, most carry a caveat in that the company is under no obligation to complete the buyback, which can often be canceled at any time.

Microsoft is the number-one cloud name, with Salesforce.com (CRM) and Adobe Systems (ADBE) rounding out the top three. That tells you how generalized the term "cloud" is, though. These three aren't direct competitors. The term cloud falls into that same gray field as buybacks and potential shareholder return that we discussed above.

With Microsoft, I'm most interested in the advancement of Microsoft Teams. Talking with small and mid-sized businesses, the feedback I've received is that most use Slack (WORK) . However, when I posted that notion on Twitter I was surprised with how many folks associated with larger enterprises reported back they use Microsoft Teams.

Microsoft, Atlassian (TEAM) , and Slack are the three dominant forces in the workplace communication space, but I wonder how long it is until we see a larger company with Microsoft in its scope try to take absorb one of the other two. With market caps of nearly $15 billion and $33 billion, respectively, neither Slack nor Atlassian is a "cheap" pickup, so I probably shouldn't hold my breath at the current valuations. 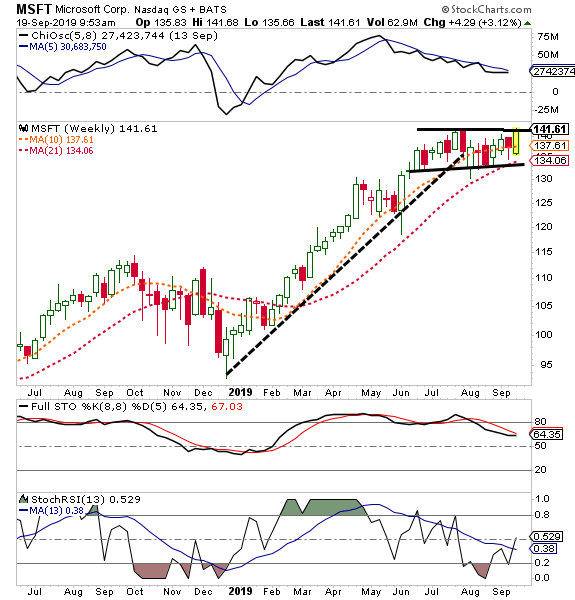 In regards to Microsoft, the stock has been consolidating since the start of the summer trading between $134 and $142 on the weekly chart. Wednesday's buyback announcement has the potential to send the shares above resistance, but it makes for a tough buy here as the potential for sellers from mid-summer looking to get out even step in to sell.

I believe traders not currently in Microsoft need to see the stock close above $142 this week and hold it come Monday of next week. If you already own the stock, then I might consider an out-of-the-money covered call or ratio call spread overlapped on the stock with an upside of at least $146. A breakout above $142 should get us to at least $146, if not $150.

Secondary indicators are poised for bullish triggers, but those appeared tied to price. That means we won't get a bullish divergence in secondary indicators. Instead, we'll get price confirmation. Should we see price breakout, but not get the trigger crosses in the Full Stochastics and Chaikin Oscillator, then we'd want to keep a tight trailing stop on Microsoft shares.

It's hard not to like Microsoft in general, but over $142 and I think we'll see momentum traders try to get this massive ship plowing higher as we head toward the fall season.

Get an email alert each time I write an article for Real Money. Click the "+Follow" next to my byline to this article.
TAGS: Dividends | Investing | Stocks | Technical Analysis | Trading | Software & Services | U.S. Equity | Stock of the Day