If you've been reading this space regularly, you know I've been on the bearish side for a while now. With rising interest rates and sky-high inflation now the norm, it's difficult to see a happy ending to our current scenario.

According to Bank of America, "a number of forces have coincided to slow economic momentum more rapidly than we previously expected...we now forecast a mild recession this year."

While the macro picture is admittedly bleak, this market has shown resilience. For example, on Thursday, the Nasdaq 100 roared back from steep losses to close 280 points above its low of the day. The S&P 500 also bounced back, closing 69 points above its low.

That type of resilience can be used to our advantage, by applying it to short-term trades.

For a while, we've been focused on names that should outperform the broader market during a recession. Pharmaceuticals and consumer staples are just two examples of sectors that fall into this category.

Perhaps we should consider the entertainment sector as part of this grouping. In an economic downturn, consumers sometimes gravitate toward distractions. This thought occurred to me thanks to the impressive chart of World Wrestling Entertainment (WWE) .

In the midst of a bear market, in a year in which the S&P 500 and the Nasdaq 100 have lost over 20%, World Wrestling Entertainment has gained over 27%. This stock has been trading in a bull channel all year (diagonal lines). 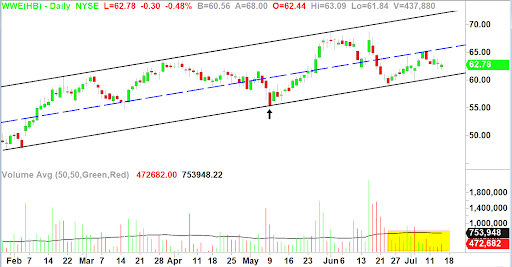 WWE has pulled back in recent weeks, but its uptrend remains intact. The pullback occurred on low volume (shaded yellow), indicating the absence of heavy selling pressure from institutions.

Since WWE is trading near the low end of its channel, we can set up a low-risk, short-term trade. My plan is to buy the stock at or near $62, and then sell if it drops below the May 9th low of $55 (arrow). Targets are located at the center of the channel (blue line), currently around $66, and the upper end of the channel, at approximately $72. This is a trade, not an investment.

I have to admit, this chart surprised me. I may not know anything about professional wrestling, but I know what I like, and I like WWE's chart.

Get an email alert each time I write an article for Real Money. Click the "+Follow" next to my byline to this article.
TAGS: Indexes | Investing | Markets | Stocks | Technical Analysis | Trading | Digital Entertainment | Media | U.S. Equity