With less than two weeks to go until we close the books on the September quarter and with Wall Street back in saddle as the summer season has wound down, let's take a look at how earnings expectation for the second half of 2019 stack up. We'll also take a first look at 2020 as we are very near the time of year when the market begins to shift time frames and starts to focus on the New Year.

We'll first want to check in on GDP expectations for the second half of 2019, comparing them to the first half. For this we'll check in with the New York Fed's Nowcasting Report, which sees GDP hitting 1.6% in the current quarter and falling to 1.1% in the December quarter.

Let's remember these are rolling forecasts, meaning they are updated as new economic data is published. The bad news on the current quarter reading is that 1.6% is down from 2.2% in late July and reflects the continued slowdown in the manufacturing sector and other parts of the economy. To put those second-half reading into perspective, the last GDP reading for the economy in the June quarter was 2.0%, which was down vs. 3.1% in the March quarter.

It doesn't take graph paper and a pencil to examine those figures and see the domestic economy is slowing. The question is how much of this slowing is due to the U.S.-China trade war versus the U.S. being in the longest economic expansion in history.

In keeping with trade, let's take a quick look at the dollar via the chart below: 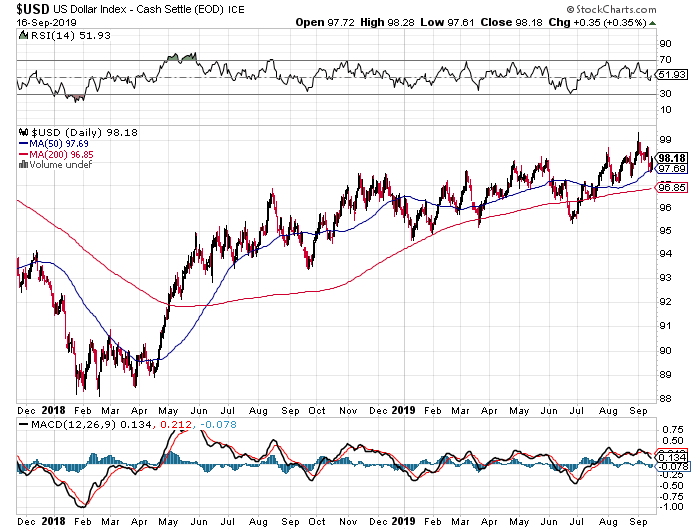 We find a strong dollar year over year in the current quarter, and at current levels even more so as we kick off the December quarter. That's another headwind for companies with meaningful exposure outside the U.S.

And as we've seen in the recent IHS Markit PMI data for China, Japan and the eurozone, all three regions have continued to slow. Indeed, they have slowed to such a degree that China and the European Central Bank (ECB) have enacted fresh rounds of stimulus to prop up their respective economies.

Putting all this together, there are several headwinds blowing against the domestic economy and U.S. companies, certainly compared to the second half of 2018. So it comes as no surprise that earnings-per-share (EPS) expectations for the S&P 500 companies in the aggregate have come down over the last year. 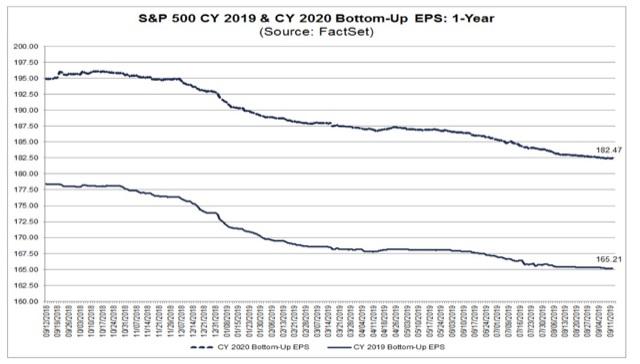 As of now, 2019 EPS for that group is expected to grow just over 2%, which is a far cry from the 11% year-over-year EPS growth that was forecast at this time last year. As we can see in the chart below, EPS growth in the first half of 2019 was all of 0.5%, and with expectations calling for a decline of more than 3% year over year in the current quarter the ability to hit that 2% EPS growth forecast for 2019 hinges on the December quarter. 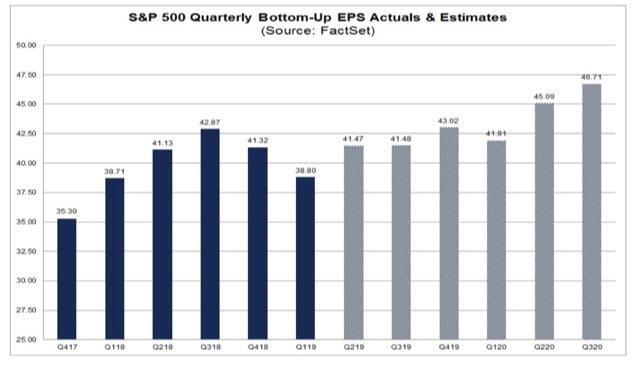 As we've seen with annual as well as quarterly EPS forecasts for 2019, it has been a moving target to the downside due to the factors discussed above. And we're at that point in the quarter where we need to be vigilant for companies adjusting their quarterly expectations given the evolving economic and trade tariff situation.

This situation sets us up for what is likely to be a volatile September quarter earnings season, especially if the economic data continue to slow and there is no real breakthrough on the U.S.-China trade front. In terms of the dollar, we'll see what the Fed not only does later this week, but also what it telegraphs about monetary policy for the rest of 2019. As these pieces come together, it also means keeping an eye on that 4% EPS growth figure for the December quarter and the expectation for more than 10% EPS growth in 2020. Given what we've seen of late and are likely to see in the coming weeks, we would argue there is a high probability that the 2020 growth forecast has to come down.

Get an email alert each time I write an article for Real Money. Click the "+Follow" next to my byline to this article.
TAGS: Currencies | Earnings | Economic Data | Economy | Fundamental Analysis | Investing | Stocks | China | Europe | Japan