The market got oversold late last week, when the Oscillator was staring at the prospect of dropping so many days of negative breadth. We rallied smartly on Friday, strongly on Monday and pathetically on Tuesday.

So why was Tuesday so pathetic? The S&P 500 rallied nearly seven points, similar to Friday, and net breadth was positive 230. So here we go again with the S&P up and breadth lagging. It's as if we had a two-day reprieve and we're right back to where we were.

And that means the McClellan Summation Index has still not turned up. It still requires yet another day of good breadth to turn up.

Consider this for a minute: The market is at its highs and seemingly goes up every day, but this indicator that tells us what the majority of stocks are doing is still not heading upward.

Perhaps it was the rebalancing of the Morgan Stanley indexes on Tuesday that created such a divergence again -- and I hate to rationalize an indicator -- but there was definitely not much follow-through on the improvement we'd started to see late last week.

I would note that the Investor's Intelligence Bulls notched up to 58%, which is the highest since July. But they are not quite over 60% yet. If the market can keep itself going through the end of the week, it is possible we finally see that elusive 60% bull reading next week. The last time we saw that was early October 2018. 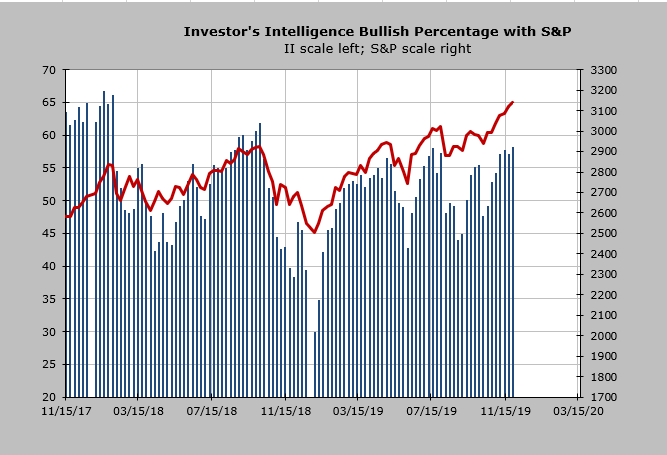 The Daily Sentiment Index (DSI) for the S&P crept up to 85. Nasdaq's crept to 87 and the Volatility Index remained steady at 10. In terms of sentiment there is still not a lot of runway, which is what happens when stocks don't properly correct.

Finally, no one asks about gold anymore. Remember back in August, when the DSI got well over 90 and I was asked almost daily about the precious metal? Even as it drifted down in September and October, there were questions. But now, silence. 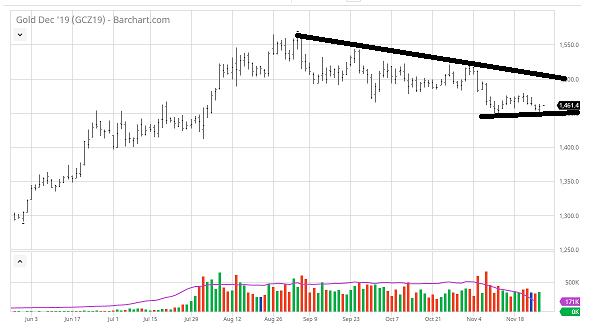 So you can imagine that it caught my eye that there might be a double-bottom forming on the chart. There is a ton of resistance all the way up, but I have my eye on these twin lows.

Note: Meisler's next column will be Monday.