The cycle of ups and downs since we started the year is quite obvious on almost any index chart, but let's look at the Russell 2000 exchange-traded fund  (IWM) . The end result is that this small-cap index is where it was in mid-to-late January. So, if you feel like your portfolio is spending a lot of time riding the waves and making you nauseated, perhaps this is why.

The question is, if we step back and look at the chart, is there a top building? Or it is just an uptrend with a lot of corrections? We don't know yet, but we do know that the Russell was the first index to make the turn on Thursday, bouncing off support, but also it was the one index that was set to get oversold in a window beginning Friday.

I hate to be Debbie Downer, but if this rally that I expect into early April falls short of that $230-ish area on the IWM, this chart will start to look like a head-and-shoulders top.

I hate to be Debbie Downer, but if this rally that I expect into early April falls short of that $230-ish area on the IWM, this chart will start to look like a head-and-shoulders top.

I also know that when we look at the long-term chart of the ratio of the S&P to the Russell, it has come down into an area that has been the beginning of a topping process for the Russell in the past. With the lone exception the black arrow in 2017. It is surely something to keep an eye on especially if the rally cannot make a new high.

The number of stocks making new lows on both Nasdaq and the New York Stock Exchange grew exponentially once again. Both now had their highest readings since March 23, 2020. (The peak reading for new lows in March last year was on the 12th, the low on the 23rd saw a positive divergence with fewer new lows). I maintain that these new lows must begin contracting, not expanding, if you are bullish.

There is one bit of good news with all these new lows, though: the Hi-Lo Indicator is now at 59%. Having an exponentially high reading in new lows will drag an indicator like this down quickly and as you can see it is finally heading toward an oversold condition. A good, or excellent, oversold condition would be under 20%. A good one would be under 50%.

On the sentiment front, the American Association of Individual Investors showed no back off in bullishness. In fact the bears are the lowest in years and the bulls are high as well. The spread between the two is now at 30 points, which is the largest spread since January 2018.

Yet the National Association of Active Investment Managers (NAAIM) saw their Exposure Index plummet back down, this time to 57. So AAII is bearish for the market sentiment-wise (and is confirmed by the Investors Intelligence survey, which was out earlier this week) while NAAIM is bullish for the market. 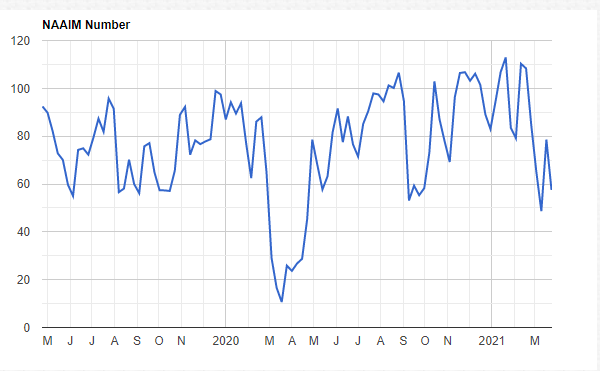 Should the market see any more downside in the coming days, I still think it would be leading us to an oversold condition with a rally expected into early April.