Remember how gloomy everyone was on Wednesday after the close?

Even Thursday's rally didn't get them excited -- which, I suppose makes sense when the S&P closes 30 handles off the high of the day and breadth is flat to down on the day.

Friday morning brought us some more red in the early going, so the calls for the S&P to come all the way down to 2850 got loud. I'll admit there were still calls for lower markets even after Friday's market saw us close at the high of the day, even allowing that Nasdaq was up on the week.

Lest you think sentiment is totally one-sided based on that, know that it isn't. You see, my unscientific Saturday Twitter Poll brings us something new and different. 61% of the approximately 3,500 folks who voted said they thought the next 100 points for the S&P would be up. Let's put that in perspective.

Final results from my Saturday Poll.
The spread has never been this wide for the upside.
As always thank you so much for participating. Couldn't do it without you! pic.twitter.com/drBnD7uZeK

I have been doing this poll (with a few exceptions) every week since just after the lows in late March, which is about six months. I have stated that this poll is quite similar to the American Association of Individual Investors (AAII) in that it is not the same subset of respondents each week (thus unscientific). With that as a caveat, know that a spread of 22 points between bulls and bears (or really up vs. down because the question that is asked is: what is the direction of the next 100 points for the S&P) is the widest yet in favor of the bulls?

Friday did not change any of the indicators I have been noting. The 30-day moving average of the advance/decline line (an intermediate term overbought/oversold oscillator) is oversold. The Volume Indicator is still hovering just over 45%, which is the top end of an oversold range (40% is the bottom end). And the Hi-Lo Indicator didn't budge from 50% (oversold is 20%).

The McClellan Summation Index is still heading down and needs a net differential of positive 2,000 advancers minus decliners to halt the slide and more to turn it back up, so there is no change there either.

In terms of where I think we are on the chart of the Sentiment Cycle I think we're somewhere in the blue arrow area where we have some rally attempts. 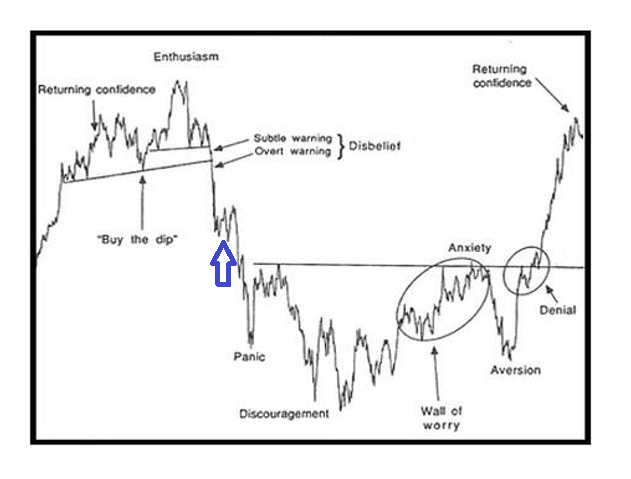 I suspect if the market is down early in the week we'll see another rally attempt late in the week and vice versa.

Note: Monday is Yom Kippur, the Jewish Day of Atonement, a holiday I observe. There will be no column Tuesday morning. I will resume writing on Wednesday. If you observe, have an easy fast.