I was of the mind that if we saw a catch up for the down-and-out stocks, we would see a change in the indicators. But that is not what happened.

Take a look at the Cumulative advance/decline line -- the breadth of the market. It had a good week last week, but it's still below the June high. We want expanding breadth, because then it's easier to find stocks that are going up. You can see in the blue box we had a similar situation in February where breadth wasn't awful -- it is not awful now, either -- but it just wasn't expanding at the same clip the S&P was.

If we prefer to smooth out breadth, we can look at the McClellan Summation Index. I admit this has really surprised me, because it has barely lifted itself off the mat with the rally in small caps last week. In fact, the last three weeks of rallying, where the S&P has gone from 3000 to 3200, has not seen a serious uptick in this indicator. Again, it was a similar situation in February.

I have already noted that at least the number of stocks making new lows is not expanding. That is a difference between now and February. Even Nasdaq, where the 10-day moving average of new lows has ticked up in the last month, has stalled out in the last two weeks, making no progress. If you are bullish you want to see this indicator heading down, not up.

We don't often look at the 10-day moving average of stocks making new highs, but let's look at the situation on Nasdaq. Sure, it ticked down last week, but in general the trend is up. It's not great that it is far below the readings from earlier this year, but the direction, for now, is still up.

If we move over to the NYSE we see a similar picture for new highs as we do for Nasdaq. It is far below the peaks earlier this year but at least the trend is up. The S&P is on the verge of making a higher high than June. So far the peak reading for stocks making new highs on the NYSE is 119. Friday there were 81. If a higher high does not net at least 119, that shows a tired market not an expanding one.

We have discussed the put/call ratio many times lately, because the equity put/call ratio has been so extreme. In July there has only been one day with a reading over .50. We know that's unusual because the 10-day moving average's current reading is the lowest on record. Any reading over .50 now would turn the moving average upward. Upward moves in the indicator tend to align with market corrections.

The put/call ratio for exchange-traded funds hasn't been nearly as extreme as the equity has. But last week four of five days saw this indicator under 1.0. I like the 21-day moving average for this indicator. You can see how extreme (low) it got in January 2018 and in February of this year, when it got under 1.0. It is currently 1.10. Should last week's trend of readings under 1.0 continue, this moving average will fall quickly. That's the math: As you replace 1.40 with .90 the moving average falls quickly. 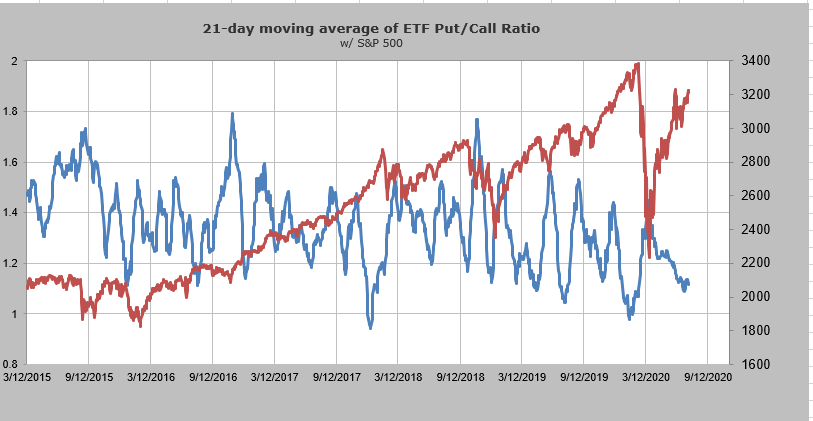 Finally, I will end by noting that the Volatility Index (VIX) closed under its 200-day moving average for the first time on Friday. I don't think that means anything. What means something to me is that the Daily Sentiment Index (DSI) for the VIX is now 12. If this gets to single digits, I think we can expect a pick up in volatility to come our way.