Following Friday's market action, the charts of the major equity indices are positive while the data dashboard has reignited some cautionary sentiment signals that continue to be of concern. And when what appears to be extended market valuation is added into the mix, we believe the data and valuation are counterbalancing the bullish charts.

The major equity indices closed mixed Friday with narrow but positive breadth on the NYSE and Nasdaq.

The S&P 500 (see below), DJIA, Nasdaq Composite and Nasdaq 100 made new closing highs while the Dow Jones Transports closed above resistance to a new closing high as well.

The net result is all the charts are now in near-term uptrends and lacking in sell signals. 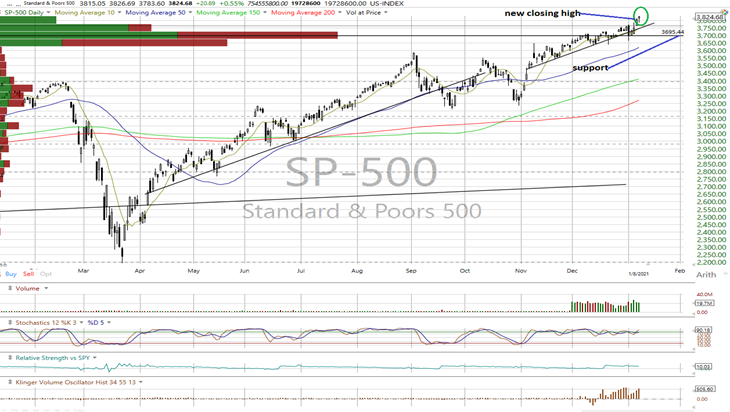 And while breadth narrowed in Friday's trading, the cumulative advance/decline lines for the All Exchange, NYSE and Nasdaq remain positive and above their 50-day moving averages.

As has been the case for a while, some of the data continue to suggest the markets could be vulnerable to some notable downside.

However, the psychology data has turned some of its flashing yellow lights back on. The Open Insider Buy/Sell Ratio dropped to 27.7 from 31.0 as insiders returned to the selling window. While it remains neutral it is quite close to a bearish reading should it drop below 25.0.

In sharp contrast, the leveraged ETF traders, measured by the detrended Rydex Ratio (contrarian indicator), extended their leveraged long exposure from a neutral 0.87 to a bearish 1.24. As we have noted several times in the past, while the Rydex/Insider action does not pinpoint tops, it has preceded important market corrections.

While the charts remain positive, sentiment and data suggest the ice may be thinning under our feet. So, we remain "neutral" in our near-term outlook as stock-picking is becoming more critical.