Some of you will vividly remember this. Most of you will not, given it happened in January 1972.

Super Bowl Sunday. Toward the end of the first half, Miami Dolphins quarterback, and future NFL Hall of Famer Bob Griese dropped back to pass on third and ten. The Dallas Cowboys had a formidable defense that year. The team had been knocking on the door of a championship season since the prime years of the Vince Lombardi era in Green Bay.

Under an intense pass rush, Griese turned one way, Larry Cole was there, he turned another, and barely escaped the clutches of George Andrie. Finally, there was no evading this next fellow, also a future Hall of Famer: Bob Lilly. A Super Bowl record loss of 29 yards on that one sack.

The Cowboys would dominate the second half and win the game. The Dolphins would post the best season in NFL history the very next year, but with back-up quarterback Earl Morrall at the helm for most of the year.

This kind of has me thinking...

How much is Tesla (TSLA) like those Miami Dolphins?

Tesla is obviously under intense pressure. Down nearly $100 in about six weeks time, TSLA stock reminds me of that 29-yard loss, which just kept getting worse every time the quarterback got away from a defender.

One major impact would be the fact that CEO Elon Musk has largely been reigned in. Tesla bulls, and there still are many "true believers" out there, will show at some point. These folks don't look at balance sheets, and they don't really care. They see a brighter future based on new technologies. On innovation.

The Miami Dolphins won every game they played the following season. Oh, this was still Bob Griese's team. When he was injured, I am sure fans must have been concerned for their year as the team relied on a back-up passer.

Tesla shareholders will like this comparison. Is the connection even remotely realistic?

Wedbush was extremely negative on Tesla over the weekend. The firm lowered their price target to $230 from $275. This is the highly rated Dan Ives who has been referred to in the past as an "uber-bull."

Ives referred to the situation at Tesla as "Code Red" in nature, explaining that the company needs to be focusing on strengthening demand for the Model 3, and improving the current business model rather than "expanding into insurance, robo-taxis, and other sci-fi projects."

On Monday, another highly rated analyst, Rajvindra Gill of Needham, maintained his "sell" rating on TSLA shares. Then comes Tuesday morning. Even Robert W. Baird's Ben Kallo, who still rates Tesla a "buy," lowered his target price to $340 from $400. Still quite bullish -- in comparison to Morgan Stanley that is.

Morgan Stanley's Adam Jonas has both a price target, which is $230, and a worst-case scenario price. That price, he lowered to $10 from $97. He rates the stock a "hold." You know what I say to a guy who rates any stock a hold, with a price target, and worst-case scenario price that are $220 points apart? I say: Can you possibly sing or dance? Because maybe this game just ain't your thing, pal.

Anyway, Jonas has rattled cages Tuesday morning that were already rattled, and all kidding aside, he is as highly rated as the other analysts mentioned here.

The Jonas worst-case involves the Chinese government targeting Tesla in the trade war, possibly halving sales in that region. An additional problem would be that Elon Musk just last week emailed his employees that effective immediately the company will be reviewing all expenses going forward in a "hardcore" way.

You'll recall that for the first quarter, Tesla missed expectations for both EPS and revenue generation very badly. It was in response to those earnings that Dan Ives of Wedbush first appeared to sour on the stock, referring to the company's quarterly performance as one of the worst debacles he's seen. 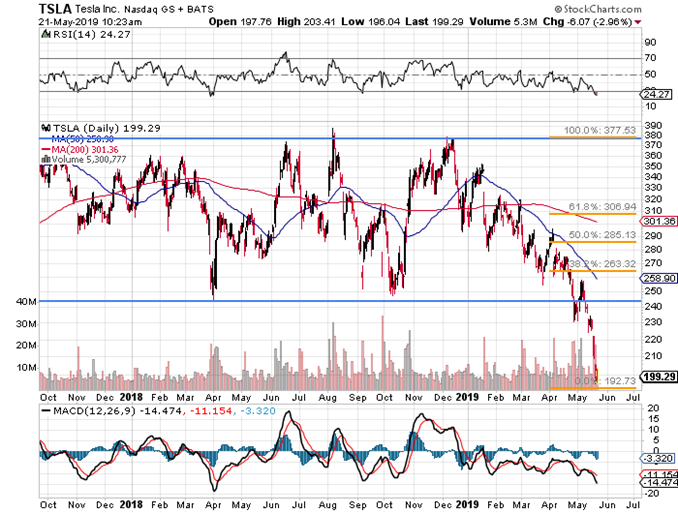 Right now, from a fundamental point of view, Tesla is not a very good-looking stock. As the last sale stands more than 100 points below the 200-day simple moving average, the same can be said technically.

Too bad I stopped trying to make money on the short side for this stock a while back. I bet I'm not the only one thinking like that now.

This is still a cash burn story. The hope was that by 2020, there could be sizable per-share profit here. Now, with growth in question, with the trade condition, and quite honestly with demand for the underlying products in question, so is that timeline.

Will the cult come to the rescue once again for Tesla? They might, but they are being very slow to come around this time. As of the end of April, 29.6% of the entire float was held in short positions in aggregate. That's nearly a 38 million share clocked buy ticket. Might be smaller by now, but how much smaller?

I would not recommend in any way taking a shot on either side in this name. This is strictly gambling. Red or black, or Tesla? That said, I'll probably buy small at some point Tuesday to try to catch a short squeeze when it happens.

I am setting a bad example here, so I am not going to lay out a price target or panic point. Understand that this in no way means that I believe in this stock.

Have a nice day.

Get an email alert each time I write an article for Real Money. Click the "+Follow" next to my byline to this article.
TAGS: Short-selling | Investing | Stocks | Trading

Kass: Apple Is the Most Consequential Investment That Warren Buffett Ever Made

Consider that The Oracle is currently 89 years old - and that he made his single best portfolio investment in over a half century at 87 years old!

Jim Cramer: Panic Has Not Been Contained in This Market

I think, ultimately, the big issue for many will be what happens in the United States if we hear about people who didn't go to China who have come down with the disease.

Given broader market weakness, this is a good time to take a look at these names and develop strategies.

3M Should Hold Nearby Support and Eventually Resume Its Advance

Let's see what traders and investors may be thinking or how they might be positioned.

I Would Be a Call Spread Buyer of Disney

While today is certainly risky, and DIS has earnings coming up next week, I would look at today as an opportunity to put on a position in DIS that is somewhat longer term.