Markets down but an improved overall picture? That's what appears to have happened after Monday's action.

Two index charts saw bullish stochastic crossover signals generated that may signal some strength for those charts. Meanwhile, the McClellan OB/OS Oscillators are still neutral and lacking ominous projections while some of the investor psychology data that has been of concern saw improvements that could help rebuild the "wall of worry."

The only index to post a gain Monday was the Value Line Arithmetic Index (see below) as the rest closed in the red. However, internals were slightly positive on both the NYSE and Nasdaq on higher volumes.

No violations of trend, support or resistance were generated, leaving the Dow Jones Transports and Value Index in positive near-term trends with the Nasdaq 100 and Russell 2000 negative and the rest neutral.

Cumulative market breadth was left unchanged with the All Exchange & NYSE cumulative advance/decline lines neutral and the Nasdaq's negative and below its 50-day moving average.

One possible bullish implication is coming from the stochastic levels on the Nasdaq Composite and Nasdaq 100 that saw bullish stochastic crossover signals generated. Such signals have been prescient of late and may indicate some strengthening of these two indices that have been lagging. 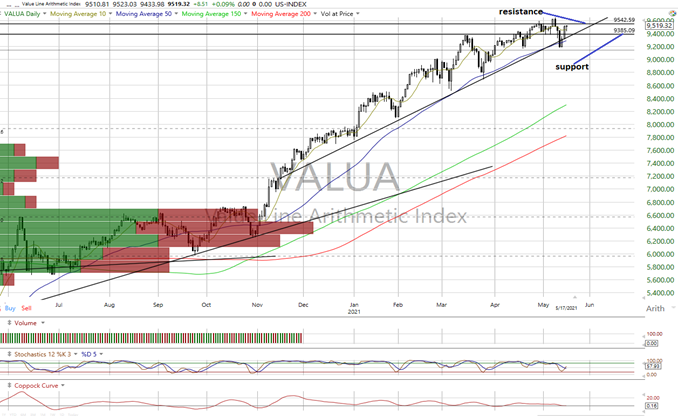 Meanwhile, this week's AAII bear/bull ratio improved to 25.27/41.13, dropping to neutral. It suggests, as does the Rydex, that some of the speculative froth has been removed and has helped rebuild the "wall of worry" we have been looking for.

However, the Investors Intelligence Bear/Bull Ratio (contrary indicator) saw a rise in bullish sentiment at 17.1/66.1 and remains in bearish territory.

Valuation still appears extended with the forward 12-month consensus earnings estimate for the S&P 500 from Bloomberg rising to $189.22 per share, leaving the S&P's forward P/E multiple at 22.0x with the "rule of 20" finding fair value at 18.4x.

The valuation spread has been consistently wide over the past several months while the forward estimates have risen rather consistently.

The 10-year Treasury yield closed at 1.64%. We view support as 1.63% with resistance at 1.75%. Its movements have been significantly moving the equity markets of late and, we suspect, will continue to do so.

The net result of the charts and data, in our opinion, suggests we maintain our current "neutral" near-term macro-outlook for equities.

How to Play a Soaring Shopify

The new high in the OBV line could be foreshadowing all-time highs for SHOP.

I'm Willing to Take a Shot Here With ContextLogic

WISH has a setup to possibly push back to its recent highs.