By STEPHEN GUILFOYLE Jun 20, 2019 | 12:31 PM EDT
Stocks quotes in this article: ORCL, MSFT, AMZN
Oracle ( ORCL) , the legacy software giant, has seen sales move largely sideways for a few years now. Its stock has been similar, trading sideways since September 2017. The S&P 500, in comparison, has gained 18.4% since then.
But look what happened following Oracle's release Wednesday evening of its fiscal fourth-quarter financial performance to the public. The firm put earnings per share of $1.16 to the tape on revenue of $11.14 billion. While both of these numbers beat expectations, revenue growth was a mere 1.2% increase over the same period last year. In a different time, that might have given the overnight crowd reason to take their leave. Instead, in response to the changing monetary environment, equities were lifted broadly around the globe, to include U.S. futures markets.
Was that really it? Perhaps, Oracle is actually doing something under the hood to transform the firm from a legacy on-premise software licensing business to better focus on cloud integration run through a subscription model. Ah. The future. The future is now.

You may recall the news of roughly three weeks back, where Oracle and Microsoft ( MSFT) agreed to team up -- sort of -- to take on Amazon's ( AMZN)  web services as the dominant player in the public cloud. Starting out regionally, Microsoft's Azure will link up services such as analytics with the Oracle Autonomous Database. The plan is eventually expand across the nation.
As for these fourth-quarter earnings, cloud services and licence support revenue printed at $6.8 billion, while cloud license and on-premise license businesses hit the tape at $2.52 billion, both numbers beat expectations, and the latter was good for 12% growth. As for the firm's other segments, hardware generated $994 million (falling 11%) worth of revenue, and service $823 million (down 7%). The adjusted operating margin improved slightly to 47% from 46%, or about 115 basis points.
Investors should be aware that though still quite robust at nearly $12.9 billion, that free cash flow for the full year is down from the $13.6 billion that the firm printed at this time last year. Perhaps the reason behind the shift in the portfolio's focus.

I don't love the stock. I do think that based on history, and the tie-in with Microsoft, that this name could end up being one those sleepers in a portfolio that investors might forget about for a while, and then realize down the road that they're glad to have the name on their book. If one were to go that route -- showing patience with the markets broadly higher and the stock up a rough 7% -- then there might be a better time to grab a few. Would anyone doubt that a negative headline, or a negative tweet, might not be that far away? 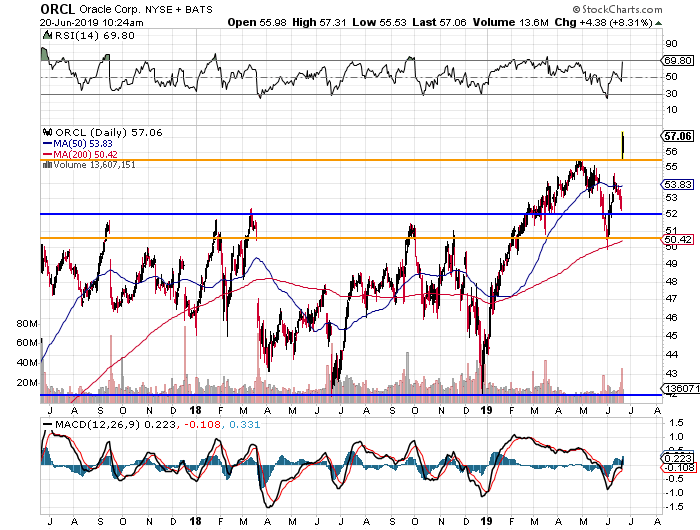 My feeling is that there are two basing patterns present on the chart. First, in purple, we have the range that ran from mid-2017 through late February if this year, then slightly higher than that, we have in orange the range since. The shares may or may not re-test Thursday morning's low (also the late April high) soon, but more than likely at some point there will be some back-fill of the gap created in the morning's exuberance. The earnings were solid. They were not "knock your socks off" solid.
For me, a small entry around $55 would be logical. No promises.
Amazon and Microsoft are holdings in Jim Cramer's Action Alerts PLUS member club.
Get an email alert each time I write an article for Real Money. Click the "+Follow" next to my byline to this article.
TAGS: Earnings | Investing | Stocks | Software & Services | Technology | Earnings Preview