The Lightning Round segment of Mad Money is a favorite of viewers. Callers get to ask Jim Cramer what he thinks of different companies they are interested in. One caller Monday night asked about Okta Inc. (OKTA) : "The market doesn't like this stock right now. Just own it for the long haul," said Cramer.

Let's check out the charts and indicators to see how they shape up.
In the daily bar chart of OKTA, below, we can see that prices made a small topping pattern in June-July-August and corrected lower in September. In October OKTA made a slightly higher low but has yet to make a higher high. Prices are trading between the declining 50-day moving average line and the rising 200-day line.
Trading volume has been heavier than previous months in September and October suggesting a shift in ownership to some extent. The daily On-Balance-Volume (OBV) line shows a decline from August into September but then improvement into October. This movement suggests a temporary period of more aggressive selling followed by a shift back toward buying.
The Moving Average Convergence Divergence (MACD) oscillator gave a cover shorts buy signal at the beginning of October but still remains below the zero line waiting for an outright go long signal.

In the weekly bar chart of OKTA, below, we see a mixed picture. Prices are right on the rising 40-week moving average line telling us the bull/bear battle continues. The weekly OBV line has been stable in September and October and could begin a new uptrend, which would be bullish.
The MACD oscillator is still in a take profits sell mode but it has been narrowing above the zero line so we might see a new buy signal in the weeks ahead.

In this Point and Figure chart of OKTA, below, we can see a double-bottom pattern with a possible price target of $139. 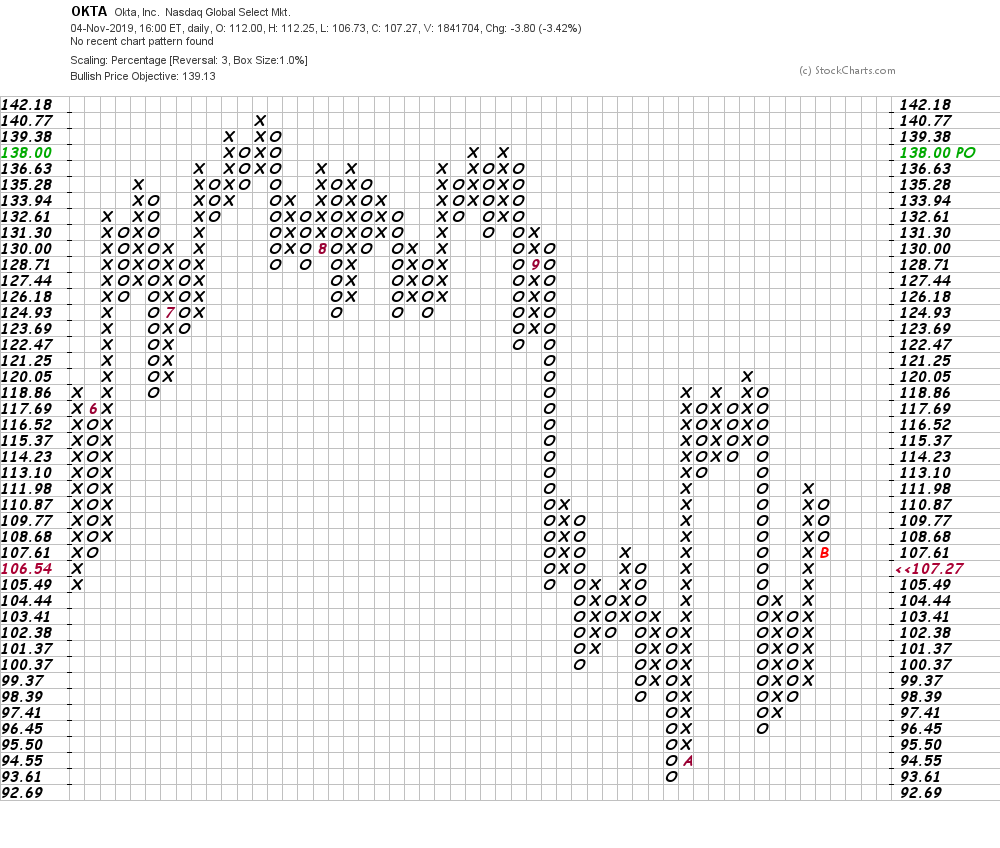 Bottom-line strategy: It looks like OKTA is close to ending its correction. Traders could go long on strength risking to $91. The $140 area is our upside price target.
Get an email alert each time I write an article for Real Money. Click the "+Follow" next to my byline to this article.
TAGS: Investing | Stocks | Technical Analysis | Software & Services | Technology | Mad Money