So many comebacks come to mind. The New England Patriots second-half surge against the Atlanta Falcons in the Super Bowl. The late, great Tom Seaver's strike-shortened 1981 season.

Some fell just short. I think of Army's missed last second field goal against Auburn in 1996 that allowed the Tigers to escape with a 32-29 win after leading 32-7 in the second half. In our world, sometimes companies make great comebacks.

Those turnarounds are often reflected in valuation. Sticking with a sports theme, Nike (NKE) will report the firm's fiscal second-quarter performance after the close this evening. On a Friday night. After quadruple witch. Isn't that just the oddest thing? Who does that? Apparently, Nike does that.

The period to be reported will cover September, October and November, meaning that while these numbers will not include much of the holiday season, they will include "Black Friday" and "Cyber Monday." What we do know is that for the firm's fiscal Q4, sales plummeted 38% year over year. The firm had been hit badly by the pandemic both on the manufacturing side in Asia and on the consumer side, globally. Last quarter, it had become apparent that CEO John Donohue had the ball rolling in the right direction. The firm, always popular with athletes and younger consumers, had made great strides toward the digitization of the entire business in order to focus on direct-to-consumer sales.

On Thursday morning, Guggenheim cited this push forward into digitization at Nike, naming the firm one of its "Best Ideas" for 2021. A day earlier, the highly rated Jim Duffy at Stifel said that he was "more optimistic" than consensus for tonight's (Q2) report. He also mentioned his expectation for higher gross margin for the firm that bodes well for not just this report, but the following two quarters as well. Duffy has a "buy" rating on the shares, and target price of $164.

So, what does the Street think of Nike ahead of the numbers? Consensus is for EPS of $0.62 on revenue of $10.56 billion. That's earnings growth of -11.4% on sales growth of +1.6% -- if that's how everything breaks down. The Street is looking for a gross margin of 42.8% that produces operating margin of 11.2%. Sell side revisions over the past three months have been decisively positive, by margins of 14-3 for earnings and 20-2 for revenue generation.

As far as we know, foot traffic at Nike's stores had rebounded quite nicely from an almost complete collapse last spring to where, according to Placer, this metric was only down 1.9% year over year for the period covering April through October. Then the pandemic resurged and foot traffic fell off badly once again in November. However, online traffic at the Nike website supposedly "popped" some 29% for September through November, according to SimilarWeb.

First off, I don't think Nike would have scheduled a quarterly earnings release for a Friday night unless John Donohue thought he had a story to tell. Secondly, while not a dividend aristocrat by any stretch of the imagination, Nike did increase the dividend in November. Does that express confidence in a sustained return to profitability, and a sustained return to sales growth? I think it must. Otherwise, the dividend increase would have been announced alongside any perception of bad news. I could be wrong. We will know shortly. 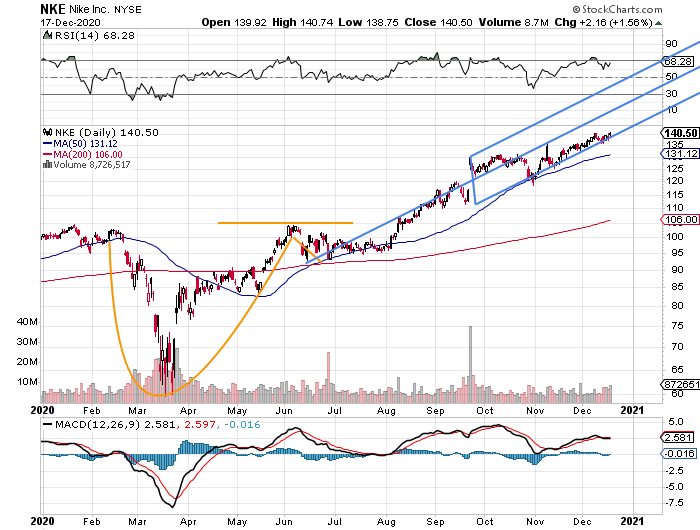 We see a combination of technical patterns here. A cup with handle created as the market crashed in March. That produced a breakout that probably has run its course. However, the breakout appears to have turned into a Pitchfork. The shares currently rise the support of that lower trend line. A positive reaction certainly puts Jim Duffy's price target in play.

Downside risk? I think the worst case is that at least the 50-day SMA at $131 could act as a backstop.

Risks: Shares could be called away at $145 on January 22 with the shares trading higher than that. Trader is left with an 8% profit for a month's work. Traders could also have a second lot of 100 shares "put" to him or her at $131 at year's end with the shares trading lower than that. The trader will then be long 200 shares with a net basis of $132.60.

Note: This is an idea. I have not yet decided on whether or not I am going to pull this or some similar trigger. I am leaning in that direction, though.

Get an email alert each time I write an article for Real Money. Click the "+Follow" next to my byline to this article.
TAGS: Investing | Put Call | Stocks | Technical Analysis | Trading | U.S. Equity