I don't mind you hangin' out

And talkin' in your sleep

It doesn't matter where you've been

As long as it was deep, yeah

Was It Deep Enough?

Technically, yes. Equity markets, no, not by every measure, but the averages that brought us to the dance -- the Nasdaq Composite and Nasdaq 100 in particular -- were hit especially hard.

From their individual tops on September 2 through their lows on Friday, the Nasdaq Composite gave up 11.1%, while the Nasdaq 100 an even 12%. A textbook correction in a period where nobody reads beyond the headlines. The more diversified, but not truly diverse S&P 500, by the way, "only" surrendered 7.7% over the same time frame.

I know. Those averages or indices heavier in technology, biotech, and internet-based communications had the furthest to fall. That was where the profits were. I get the reasons. Elevated levels of volatility will likely have to be tolerated if one expects to see future gains made by the sectors/industries that had taken equity investors to all-time highs.

It may have appeared to investors that the environment was rife with opportunity. Perhaps investors were simply funneled into specific areas of risk exposure as they sought out alpha when perhaps otherwise, in another time, they would have settled for yield.

Given the still developing environment, I believe it was less a case of fiddling while Rome was burning, and more a case of seeking what was needed at the time.

An individual will walk a long way to find water once his or her canteens run dry. Until they do, though, that individual will likely ration. The point being that the visible onset of an emerging crisis causes conservation on the personal level. The crisis itself will spawn more overtly aggressive behaviors, even among the timid.

Is It Safer Now?

Sorry to say. I just don't know. While Monday's rally was indeed, "just what we needed," the rally came as the major equity indices, as well as many important individual stocks that weigh heavily upon those indices were all put in the position of having to defend their 50-day simple moving averages at approximately the same time. There was indeed a technical reason for some support to show up precisely when it did. There were also more positive headline level news events released on Monday than a man such as myself could shake a stick at.

The dealmakers showed up. Who can argue that Nvidia's (NVDA) aggressive move on Arm Ltd. is not a bull market-type acquisition.

How about Verizon (VZ) ? or Gilead Sciences (GILD) ? Finally the investment made by Merck (MRK) into Seattle Genetics (SGEN) . Suddenly, tech, biotech and big pharma are willing to pay for non-organic growth. The product of an inability to provide for one's self? Or perhaps the opportunity to grow faster than one might have due to the wonders of easy money? Hmm. Food for thought. Turn one way, this would be a market negative. Turn the other way, and that unwelcome wind in your face becomes a refreshing breeze at your back. Almost funny. Almost.

All of the risks we have been discussing daily in this column still hunt. Hunt for you. Hunt for me. Electoral risk remains the monster under the bed, and it only grows as our legislators intentionally choose the blame game over honest cooperation. Each side gambles that the public will blame the other. Being loyal to no one other than God, family, country and corps, but fiercely loyal to all four, I say blame both sides.

Don't forget that Monday's markets also got a nice assist on the medical front. Not only did AstraZeneca (AZN) receive authorization in the U.K. to resume Phase Three clinical trials in that country for it's Covid-19 vaccine candidate, but Pfizer (PFE) and BioNTech (BNTX) announced plans to increase the number of participants in the Phase Three trials for their collaborative effort to 44K from 30K. This came in addition to Pfizer CEO Albert Bourla's comments that this candidate would likely provide answers on safety and efficacy by late October.

On top of that, news also broke that Eli Lilly (LLY) and Incyte (INCY) have seen positive data for their therapeutics when combined with Gilead's Remdesivir. Anything that tamps down an over-active response by the body's immune response would be welcome. All of this news would be why breadth was overwhelmingly positive on Monday, on increased trading volume. Yes, Information Technology outperformed the market in general on Monday, but the REITs led the way.

Well, at least for one day, Wall Street made some pretty big bets on science. On science being able to normalize severely damaged industries across the economy sooner than previously thought possible. Are they ahead of themselves? Could be.

Remember these are not humans making these decisions, these are high-speed algorithms. Many of us don't read entire articles beyond headlines or keywords. Neither do they. Overshoot is part of their game.

Apple (AAPL) Watch 6? No! But beware, Tuesday's product launch event could elevate markets, or it could disappoint.

The Fed? No! You won't hear a peep out of that crew until tomorrow.

The Mets? Yes! Meet the Mets. There is finally joy in Mudville. Break out the Ed Kranepool jerseys.

News broke on Monday afternoon that hedge fund billionaire Steve Cohen had reached an agreement with the Wilpon and Katz families to acquire a majority stake of the New York Mets MLB franchise. Cohen still needs the approval of the other owners, meaning he needs support of at least 23 other teams of 30, and I don't believe the owners meet until November, so this is not immediate. But help is on the way for beleaguered Mets fans.

While the Mets have not been perennial losers, they have been run like a middle market team in the nation's largest market. Cohen, already a minority owner, is a lifelong fan of the team, and would be, as measured by personal wealth, in a position to change the way the Mets have done business for a long time.

Well, almost everyone wondered about the timing of Citigroup's (C) passing of the torch to Jane Fraser from Michael Corbat. Just time to make the switch? Maybe. Shares of Citigroup took a 5.6% beating on Monday, while the Financial sector outperformed the S&P 500.

The selloff hit this stock late in the day after the Wall Street Journal reported the possibility a reprimand could be headed the firm's way from the Office of the Comptroller of the Currency and the Federal Reserve Bank pressuring Citigroup to improve both its technology as well as its risk management procedures.

To say that Citigroup might be facing some uncertainty to the immediate front is obvious. Citigroup was the worst-performing stock in the entire S&P 500 on Monday.

You know who number one (in the S&P 500) was on Monday? That's right... Kohl's (KSS) . Funny. Right? I mean, just FYI, I find it funny that Kohl's would be the top performer among constituents of the market's broadest large-cap equity index just days prior to being ejected from that index.

That's right, Kohl's gets the boot this weekend, but for one day, the stock was king.

Check out the way shares of  Citigroup and Kohl's behaved on Monday after tracking both sides of their respective 50-day simple moving average for so long. 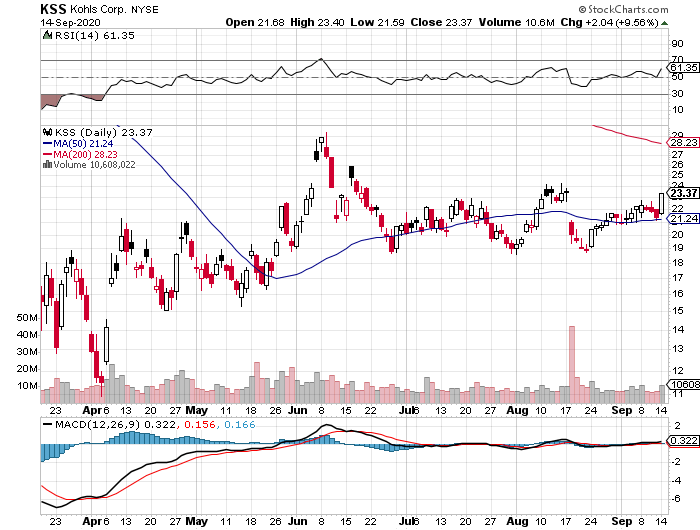 Just wild. Now, I am not telling you to buy either one of these. But if I had to buy one, it probably would not be Citigroup.

(Nvidia, Seattle Genetics and Apple are holdings in Jim Cramer's Action Alerts PLUS member club. Want to be alerted before Jim Cramer buys or sells these stocks? Learn more now.)

Get an email alert each time I write an article for Real Money. Click the "+Follow" next to my byline to this article.
TAGS: Mergers and Acquisitions | ETFs | Indexes | Investing | Markets | Politics | Stocks | Trading | Healthcare