Shares of Incyte Corporation (INCY) have skidded lower the past four months or so but they are up sharply this Monday. Is this a turnaround to the upside?

In this daily Japanese candlestick chart of INCY, below, we can see that the shares stalled several times up around $110 in late June and July. INCY turned lower in the summer but has been stabilizing around $80 since early November. Prices look like they will close above the declining 50-day moving average line. The slope of the 200-day moving average line is still positive.

The On-Balance-Volume (OBV) line turned lower from July but appears to have made a low in late November. A rising OBV line tells us that buyers are now more aggressive. The 12-day price momentum study shows higher lows from November even though prices have been making equal lows. This is a bullish divergence and can foreshadow a move to the upside.

In the weekly candlestick chart of INCY, below, we can see a mixed story. The shares are in a downtrend and trading below the cresting 40-week moving average line. The candles show some lower shadows the past six weeks telling us that traders are rejecting the lows as prices near the $80 area.
The weekly OBV line has moved straight down since May and that tells us that sellers of INCY have been more aggressive for several months. The 12-week price momentum study shows higher lows from September which can be foreshadowing a turn to the upside.

In this daily Point and Figure chart of INCY, below, we can see that prices have held the $80.63 level four times. A potential upside price target of $100 is being projected. 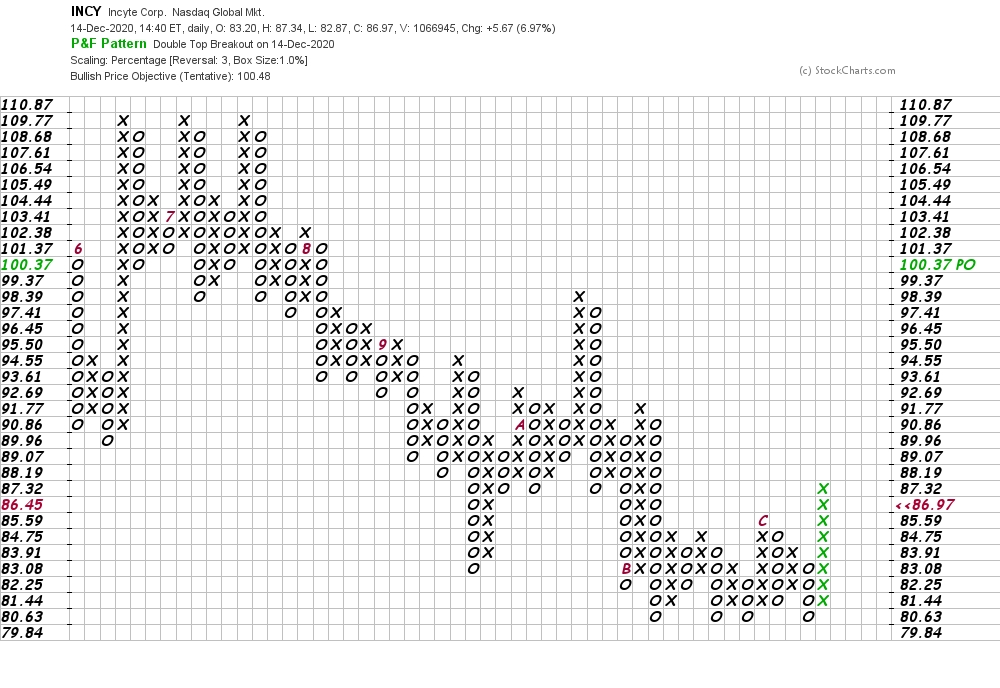 Bottom-line strategy: INCY is still in a downtrend but it is showing us enough technical reasons to approach the long side. Traders could buy INCY at current levels and toward $85 risking $79. The $100 area is our first price target.
Get an email alert each time I write an article for Real Money. Click the "+Follow" next to my byline to this article.
TAGS: Investing | Stocks | Technical Analysis | Pharmaceuticals | Coronavirus