Deutsche Bank (DB) has become that star athlete with tons of potential who simply can't stay out of trouble.

The current headlines read like a mobster's rap sheet. Seriously, take a look:

Deutsche Bank (DB) Said to Have Lost About $60M in U.S.Equities, Said to Lose Money at Central Risk Book in U.S. - Bloomberg

So, it should be no surprise the company has seen its market cap basically cut in half this year. What might be surprising, however, is how much lower the stock is currently than it was during the financial crisis in 2008 and 2009. While the crisis was a U.S. one, it reached financial institutions around the globe. DB fell from above $100 to the teens.

After closing below $10 on Wednesday, the shares are giving up another 5% this morning as DB's headquarters is raided. Expect more fines on top of the already $18 billion the company has paid over the past decade.

DB's chart, below, is amazing when you consider this was a triple-digit stock in 2008. Ninety percent of the value has vanished over the past decade. We have seen bounces during that time, and we may be approaching another one if history is any guide. 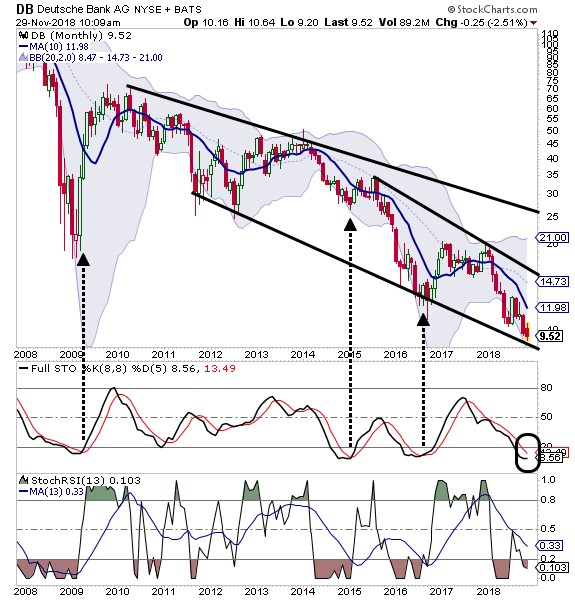 If history is any guide not only should traders wait for that bullish cross to initiate a long position, but they should remain on the sidelines until it happens. The stock continued to trade lower in a volatile fashion under these same technical setups all three times over the past decade. While three isn't a huge sample size, it's enough to give me pause.

There are easier trades to be had, so why force one?

Get an email alert each time I write an article for Real Money. Click the "+Follow" next to my byline to this article.
TAGS: Investing | Stocks | Financial Services | Stock of the Day