By TIMOTHY COLLINS Jun 17, 2019 | 12:25 PM EDT
Stocks quotes in this article: FB, V, MA, PYPL, UBER
So, Facebook ( FB) , the company that has made headline after headline as the poster-child for collecting and sharing private data is introducing its own cryptocurrency, a product whose users value anonymity.
Am I the only one who sees the massive irony here?
After scoffing at the irony, I can understand the merits of the move. Facebook has a massive international base of active users. Asia has four times the number of active Facebook users North America has and three times that of the rest of the world. This creates a commerce and peer-to-peer opportunity that could be massive. On the commerce side, a digital coin could allow for instant transactions throughout the world with limited roadblocks and limited impact of foreign currency. In theory the risk of fraud -- and of other bad financial transactions -- would also significantly decrease.
On the payments side, person-to-person movements of capital, especially in emerging or unstable markets will hold appeal. Given the propensity of fake Facebook profiles on the social media network, it will be interesting to see how many people attempt to conduct anonymous financial transfers using a fake or anonymous accounts. I don't know if that will be an option.
It's no surprise to see the company expecting digital coins to play a roll in app purchases as well as games. Assuming we don't see ridiculous conversion costs or value fluctuations, I suspect this will be a mainstay. Also, with more sports gambling coming online in the U.S.  and around the world, Facebook could make a name for itself in the world of sports wagering through apps offered through its platform. This is total speculation, but it is a potential opportunity for the company to drive use of its cryptocurrency.
Facebook could also be capitalizing on another characteristic of digital currency supporters: decentralization, or anti-government control. It's no secret the U.S. government has been critical of Facebook. The company is reportedly a subject of a competition probe by the Federal Trade Commission. Furthermore, recent emails reportedly show CEO Mark Zuckerberg didn't prioritize compliance with an FTC consent degree. Is it possible Facebook is also trying to win the support of the anti-government movement, often highlighted by staunch crypto backers?
Whatever the case, Facebook has gained monetary support from Visa ( V) , Mastercard ( MA) , Paypal ( PYPL) , and Uber ( UBER) , all of which have invested around eight figures in the project.
The news has certainly revived Facebook shares. After a rough past six weeks, Facebook shares found support at the 21-week simple-moving average (SMA). Since that time, they've been able to bounce back above the 10-week SMA. The pullback of the past six weeks is shaping up as consolidation in the form of a bullish flag. The bounce should retest the May highs at the very least. A weekly close above those levels and traders should target a test of the 2018 highs. I ultimately believe that is what we'll see, but I'm looking more for a "W" pattern to form here, rather than a straight shot high. That means, I'm looking for a push into the $200 level, a pullback to the $180-$190 area, then another push higher to those 2018 highs.
The move in digital, for whatever the reason you believe true, appears to be a good one for Facebook. The company has several ways to profit from its use and may even get the benefit of some reputation recovery as well. 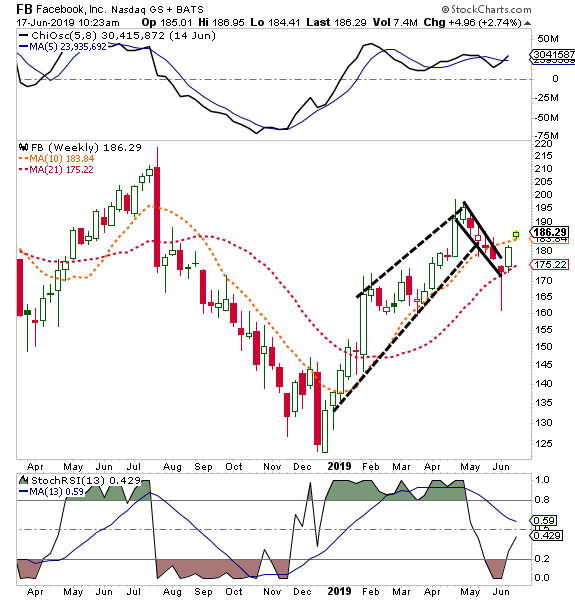 Facebook and Mastercard are holdings in Jim Cramer's Action Alerts PLUS member club.
Get an email alert each time I write an article for Real Money. Click the "+Follow" next to my byline to this article.
TAGS: Investing | Options | Stocks | Technical Analysis | Technology