Friday afternoon. This past Friday afternoon, to be precise, I was reminded at times of another Friday afternoon -- that of October 16, 1987. The broader markets, this most recent Friday, seemed to find some support after 3 p.m. ET. That support was just a head fake, but I don't remember any false flags on that terrible day more than 31 years ago. While traders stayed in risk-off mode throughout the day, there would be no outright capitulation. Maybe there just won't be? Maybe algorithms simply crash in slow motion? Still, the way the tape had behaved earlier in the afternoon had put some thoughts in my thick Irish head.

This becomes difficult and confusing. I do not expect all of you to correctly adjust for every single force impacting the marketplace at this time. Understand though, that all of these "balls in the air" are at least partially priced in, negatively. The professionals (some of whom I know to be morons), with all of their resources, are having a hard enough time sorting all of this out.

The bottom line is that markets no longer trust growth. Economic growth or earnings growth? Yes. If everything, in all of its minutia, clouds one's brain, or forces an intellectual withdrawal from harsh reality..... this is really all one needs to know.

For the most part, after simplification, no matter how much the wizards of planet earth try to identify the individual negative forces being priced in at present, there are four avenues of attack. Very plainly: fiscal policy, monetary policy, trade policy and political environment are the forces that have and will bend to their will the natural potential for trend. They all extend in greater detail, but understanding that everything else boils down to these four intertwined branches will lend some rest where needed, and aid in the preservation of intellectual capital.

A few of you may recall an old Hanna-Barbera cartoon character by the name of Breezly Bruin. The lead character, Breezly, had a little pal that went by the moniker of Sneezly Seal. The combination of the four negative market forces mentioned above and the warped brain of a kid that grew up at a special time have put a thought in my head. There is an old adage, "When America sneezes, the world catches a cold." What if the world's two largest economies (U.S. & China) sneeze at the same time? Wait. I can top that. What if the U.S., China, the EU, Japan and the UK all sneeze at the same time? What if all mentioned are either involved in trade disputes, and/or the perverse use of both fiscal and/or monetary policies while suffering from heightened political risk? Oh, and at least temporarily, the U.S. faces a partial government shutdown, as well. That's a strong sort of fiscal/political mix. That, as well as the various investigations that I will not delve into publicly, have frustrated what I would think of as proper price discovery, which itself is something that experienced traders still struggle with.

My Real Money colleague Bob Lang hit it on the head on Sunday. In his weekend note, Lang mentions the "Santa Claus Rally," as well as the "January Effect." He also goes into the evolution of price discovery, where not only the algorithms -- that we all complain drive price more than anything else, along with artificial intelligence and high-frequency trading -- but what Bob refers to as "word triggers" now drive price. This is what I have often referred to as "headline seekers."

All of these later-day impacts to the way price is discovered really fall under one bundle, and have truly changed this game to the point where the market does not necessarily do what many think it might.

I will mention one thing that I think has been preserved to some degree, and even enhanced in this newer regime. While headline-chasing algorithms certainly pervert what one might see as logical outcomes based on fundamental analysis, technical analysis remains valid, to some degree, as everyone reads the same charts. Many see those charts the same exact way, be they analysts working for the HFT shops, or simply an old dog working all night from his office.

In other words, a lot of folks are figuring out where the bus stops are, using the same methods. Direction, while in theory should be directed by market fundamentals, in reality is directed by money flow. Lipper let us in on just how sloppy mutual and ETF flows have become last week. That data ended on Wednesday. The rest of the week got worse.

I have no doubt that, just as good in the end will always defeat evil, the validity of fundamental analysis will ultimately regain control over direction through the flow of capital. How fast markets get there, and how volatile the ride, will be left up to the headline makers. We already know this path is strewn with debris. I often preach on how necessary a high level of self discipline is in finding one's way through the mayhem -- and how much easier it is to maintain a high level of financial discipline if one maintains an impenetrable code of conduct in all facets of life.

I believe this to be forever true. The Roman Emperor Marcus Aurelius, also known as "the philosopher king," once said: "Very little is needed to make a happy life; it is all within yourself, in your way of thinking."

Marcus Aurelius was certainly a flawed man. He was in no way infallible. Yet, I think he nailed this. They say a baseball player stuck in a long batting slump will often start making fielding errors. The trick is to compartmentalize one's thought process. Emotional response becomes the enemy of rational thought. Having a tough month, or two, or three? I hear your pleas. I read them, each and every one. I know you hurt.

Technical analysis points toward a retest at least of the February intra-day lows. The FOMC may not play ball in the way that most of us see as required. Even if the U.S. and China play nice, both are expected to experience slower economic growth. The UK may have to go through a hard Brexit, while the EU seems poised for increased misery, regardless. Stay strong. Fear is for the wicked. Despair is for the hopeless. We are forever not one nor the other. Every one of you is stronger than you think. Adapt.

I am no reporter. I think of myself as a trader who writes about his own trades and his own trade ideas. I am not going to rehash the news that broke late last week, regarding JNJ. We'll leave that to professional journalists. If you bother reading me, then surely, you have already read up on this story. One thing though, seems to have flown under the radar. The firm, on Friday afternoon, to no avail (the stock fell in price by 10%) in the marketplace.. defended itself. JNJ referred to the Reuters story that unleashed the storm of sell orders on this name as "One-sided, false, and inflammatory." Now, I am not saying that I believe JNJ in their assertion, nor am I saying that I don't believe their defense. What I am saying is that I don't know, but what if those headline seeking algorithms mentioned above have over-sold this name? With the stock down another 1% in the dark of early morning, what if they still are? 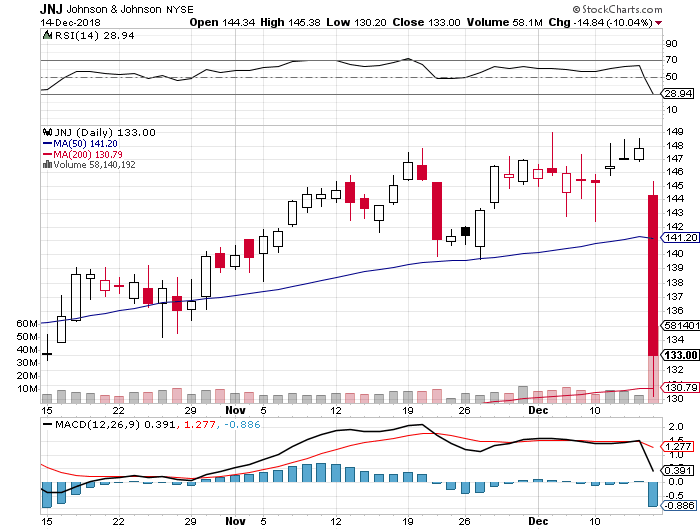 My thought is this. A trader cannot risk buying the name here outright, unless one is certain on a lot of items that are unknowable right now. In addition, many follow the three0day rule regarding broken stocks. Should the name, I won't say return to trend, but at least have less than a catastrophic outcome priced back in, then this morning may have been when, in hindsight... opportunity knocked. Johnson & Johnson will report quarterly results on January 15, so a limited risk upside trade has about a month to pan out, but I think one can only attack through the options markets, right now. For me, an equity stake is out of the question, due to the lack of overt favor in a risk/reward scenario.

Keep in mind that the name is going to be volatile again today. These examples are based on a closing price of $133. To put in play one of these ideas in real time, the trader will likely have to adjust for either strike price, or option premium. I would not, however, mess around too much with expiration date.

Note: Neither one of these trades carries any risk beyond the initial debit outlay.

Whether it's the Fed, inflation numbers or jobs numbers, with this market, it's always something.