Step back from the day-to-day of the market. Notice that the S&P 500 has gone nowhere since that big gap up nearly two weeks ago. The market reached an overbought reading about 10 days ago and since then it has been chopping about like it's doing the two-step.

A few days up is followed by a few days down. The end result is a market that has gone nowhere.

The overbought reading is being worked off, as you can see from the chart of the Overbought/Oversold Oscillator. Look how much it has backed off this week. There is more work to do before it gets back to an oversold condition, but right now the market is digesting the gain.

In this time, though, the complacency has come back into the market. Well, not everywhere, but in most places. For example, the American Association of Individual Investors (AAII) saw the bulls fall by 11 points this week. So they got bulled up the week before and then the choppy market is shaking them out. They are still elevated, but not as much as they were a week ago. 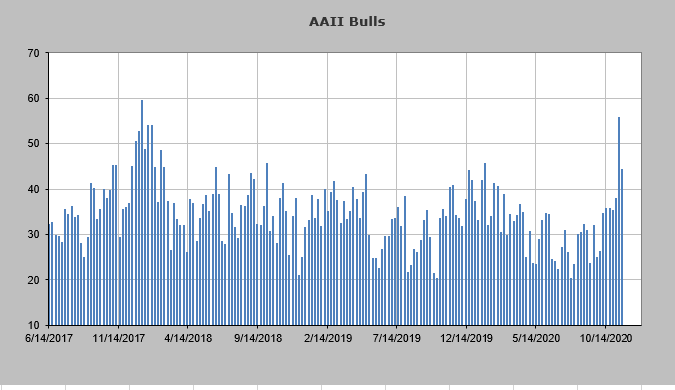 The folks over at the National Association of Active Investment Managers (NAAIM), however, cannot seem to rein in their bullishness. Their exposure is now at 106. If that sounds high, it is. The last time they were this high was Aug. 26. Go back to that chart of the S&P and see the green arrow. They got one more week of upside after that reading of 106.

In mid-October, almost concurrent with the high, their exposure was 103. 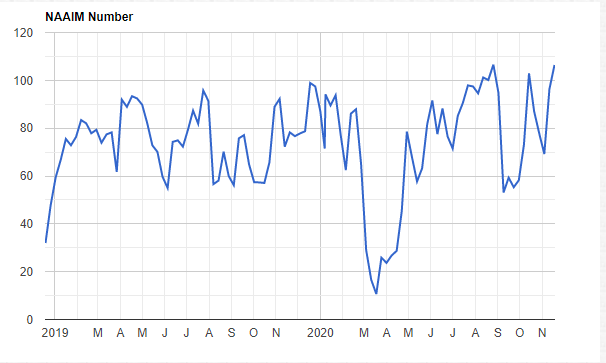 I would counter that there are differences between then and now. In August breadth was terrible, and it is far from terrible now; it is very good. Breadth was quite good in mid-October. But I think you can see that the peaks those two times were one-day events and this time there is a lot more milling about.

For the time being, breadth remains solid. The McClellan Summation Index is rising, which means the majority of stocks are as well. If this were to halt its rise and roll over, that would be much more concerning. In fact, an overbought market coupled with complacency and poor breadth is a bad combination. We only have two of the three in place now.

That's why the market looks to me like a chop fest working off the overbought reading and the complacency. I still think a move down would work both off.

My 'Hot Money' Is Going Into Lithium Mining and Pot Stocks

This is all about trading fast-moving speculative stocks.