Near-term chart trends for the major equity indices remain split between neutral and bullish, while the data is currently a mix of neutral and negative readings.

Our primary concerns are what appears to be overly bullish sentiment on the part of investors as insiders have been selling while valuation continues to be extended. 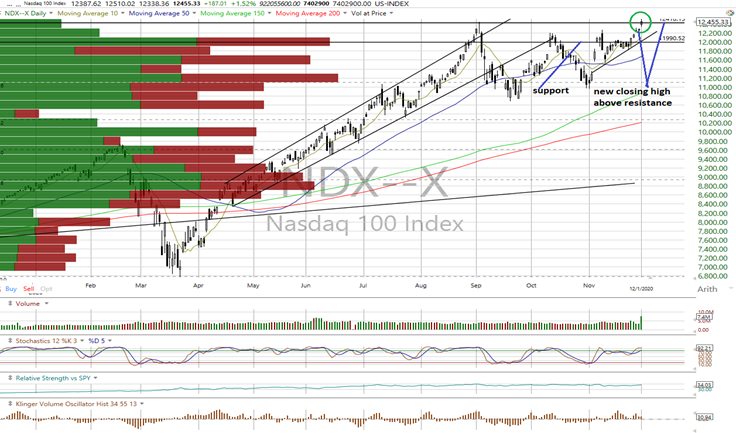 Positive developments were seen on the S&P 500, Nasdaq Composite and Nasdaq 100 (see above) as all made new all-time closing highs.

A minor negative appeared on the MidCap 400 as it generated a bearish stochastic crossover signal. Said signal would become actionable only if support is violated on a closing basis, in our opinion.

Regarding trend, the S&P, Nasdaq Composite and Nasdaq 1000 remain bullish with the rest currently neutral. Some uptrends have recently been violated but support levels have held.

Breadth remains positive with the All Exchange NYSE and Nasdaq cumulative advance/decline lines positive and above their 50-day moving averages.

The Open Insider Buy/Sell Ratio remains in neutral territory but dropped to 26.4 and near bearish levels as insiders have lately been fairly consistent with selling transactions.

On the other hand, the detrended Rydex Ratio (contrarian indicator) remains bearish at 1.47 as the leveraged ETF traders are heavily leveraged long.

Meanwhile, this week's Investors Intelligence Bear/Bull Ratio (contrary indicator) saw another decline in bearish advisors as bullish sentiment increased and remains in bearish territory at 17.2/64.6. Investor sentiment appears to be overly bullish with the markets at new highs.

The valuation gap remains extended with the S&P 500 trading at a P/E multiple of 23.0x consensus forward 12-month earnings estimates from Bloomberg of $159.46 per share, while the "rule of 20" finds fair value at 19.1x.

The charts remain generally constructive. However, investor sentiment and valuation both appear cautionary and are the primary reasons for our maintaining our near-term "neutral" outlook for the equity markets.