Last Thursday during his "Mad Money" program, host Jim Cramer zeroed in on a few stock names that are due to report earnings this week. Rounding out the week on Thursday is Intuitive Surgical Inc. (ISRG) . Let's check out the charts of this manufacturer of robotic surgery systems.

In this daily bar chart of ISRG, below, we can see a rapid descent from around $620 in February to just $360 in March -- it could make your head spin. Trading volume more than doubled in March from the level in December. The slopes of both the 50- and 200-day moving average lines are negative. We also can see a late sell signal from the "death cross" of the 50- and 200-day moving averages. Moving average signals are late by definition, but this looks like a good example of when not to follow these signals.
The On-Balance-Volume (OBV) line shows only a slight decline from February to March even though prices declined significantly. I can only assume that prices fell without aggressive selling and the majority of longs stayed with their positions. The Moving Average Convergence Divergence (MACD) oscillator turned upward from the middle of March and generated a cover shorts buy signal. The oscillator is now rapidly moving up toward the zero line, but a pullback or correction this week is likely to delay a buy signal.

In this weekly bar chart of ISRG, below, we have some interesting clues to highlight. The big picture of the price action could be a large broadening pattern over the past two years, with prices making wider and wider up and down swings. The ultimate breakout is delayed as each swing fails to launch a sustained trend.
Prices are below the declining 40-week moving average line, but I would not rule out a move back above the line in the second half of this year. The weekly OBV line peaked in April of last year and that is the level that needs to be exceeded if ISRG is going to prove itself a winner. The weekly MACD oscillator peaked in January and turned down below the zero line for an outright sell signal. The movement in the MACD oscillator is a bearish divergence as the crossover came from a lower high even though prices had made a higher high. Now the MACD oscillator has begun to narrow, so we could see a positive signal in the weeks ahead.

In this daily Point and Figure chart of ISRG, below, we can see that the software is projecting a potential longer-term new high for ISRG in the $672 area. In the short run I would anticipate that prices pullback a while and broaden the pattern. 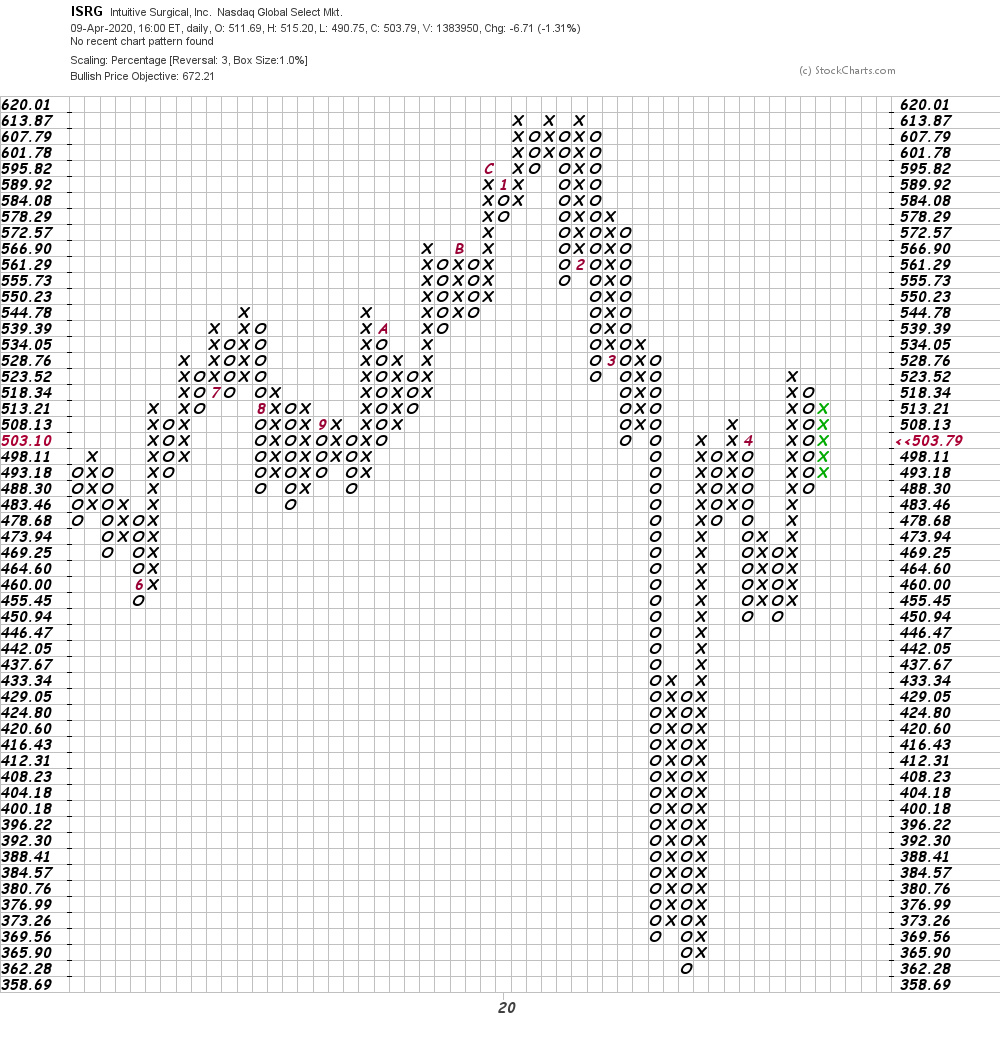 Bottom line strategy: Prices have made a significant rebound in the past few weeks  A pullback or correction is likely in the short term. Maybe we see prices retreat toward $450-$440 or so in the near term before resuming their uptrend. Aggressive traders could use this kind of pullback, should it develop, to probe the long side of ISRG.
Get an email alert each time I write an article for Real Money. Click the "+Follow" next to my byline to this article.
TAGS: Investing | Stocks | Technical Analysis | Health Care Equipment & Services | Healthcare | Technology | Technology Hardware & Equipment | Mad Money | Real Money | Earnings Preview