For his "Executive Decision" segment of Mad Money Monday evening, Jim Cramer welcomed back Andreas Fibig, chairman and CEO of International Flavors & Fragrances Inc. (IFF) , to the show for an update on the business. IFF  reported first-quarter earnings of $1.57 a share on revenues of $1.3 billion.

In an environment where costs are on the rise, Fibig said it was crucial that IFF turn to their robust research and development pipeline and explore adjacent categories, which they've been doing through acquisitions. The biggest trend in the market right now, Fibig said, is toward natural ingredients.

In the daily bar chart of IFF, below, we can see a choppy sideways trading range from last June to the end of May. This month prices rallied sharply and made a new high for the move up -- breaking out of the $122 to $150 trading range. Prices moved above and below the 50-day and 200-day moving average lines for several months but in early June prices finally soared above the rising 50-day moving average lines as well as the slower-to-react 200-day line. We can also see a bullish golden cross earlier this month with the 50-day line crossing above the 200-day line.

The daily On-Balance-Volume (OBV) line shows a rising (bullish) trend from September to early December. This was followed by a declining phase to March. Since late March the OBV line has been rising again signaling more aggressive buying.

In the lower panel is the trend-following Moving Average Convergence Divergence (MACD) oscillator has been in a bullish mode from early April. The two moving averages of this indicator have begun to narrow, which could lead to a take profits sell signal in the weeks ahead.

In the weekly bar chart of IFF, below, we can see the price action of the past three years. The rally this June did break above the late 2018 high but it has yet to break the late 2017 highs. Prices are above the rising 40-week moving average line.

Trading volume has been heavier since September but the weekly OBV line only turned higher from March. The weekly MACD oscillator moved above the zero line in May to signal an outright buy signal.

In this Point and Figure chart of IFF, below, we can see a potential longer-term price target of $184. A trade at $153.96 will be a plus and should refresh the uptrend. 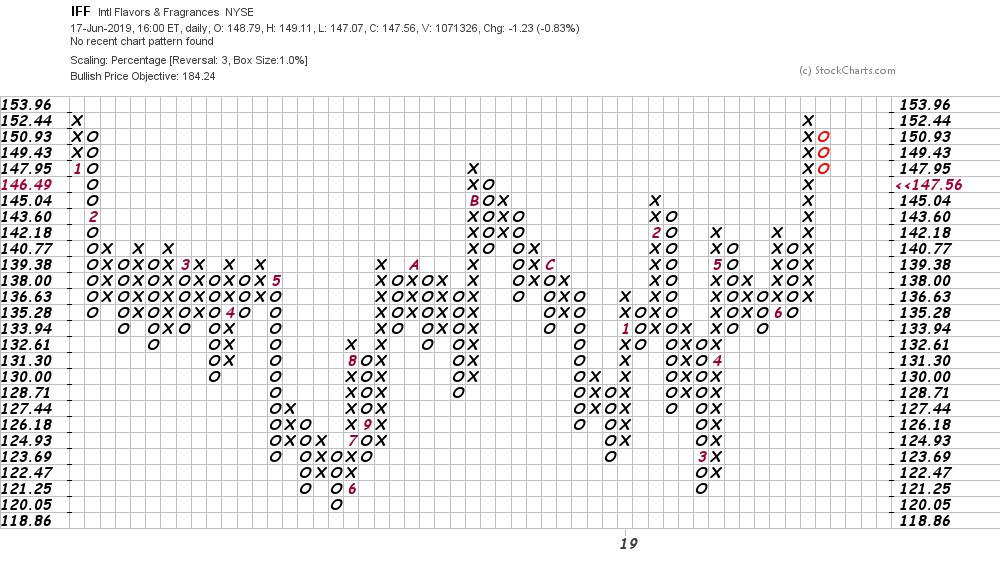 Bottom-line strategy: IFF has strengthened the past three to four months. Retracements have occurred before but it looks like IFF can continue to rally in the months ahead. Traders could consider going long or adding to longs in the $145-$152 area, risk below $142 and look for longer-term gains to the$175-$185 area.