Shares of the Santa Clara-based semiconductor company crashed about 9% on the day, marking the second deepest one-day slide in a decade.

The drop takes a great deal of steam out of the stock's remarkable run into earnings and fomented a fall off highs for the semiconductor index that had run nearly 40% to all-time highs year to date, by stinging peers like Nvidia (NVDA) and Taiwan Semiconductor (TSM) . The move is reflected in the midday chart below: 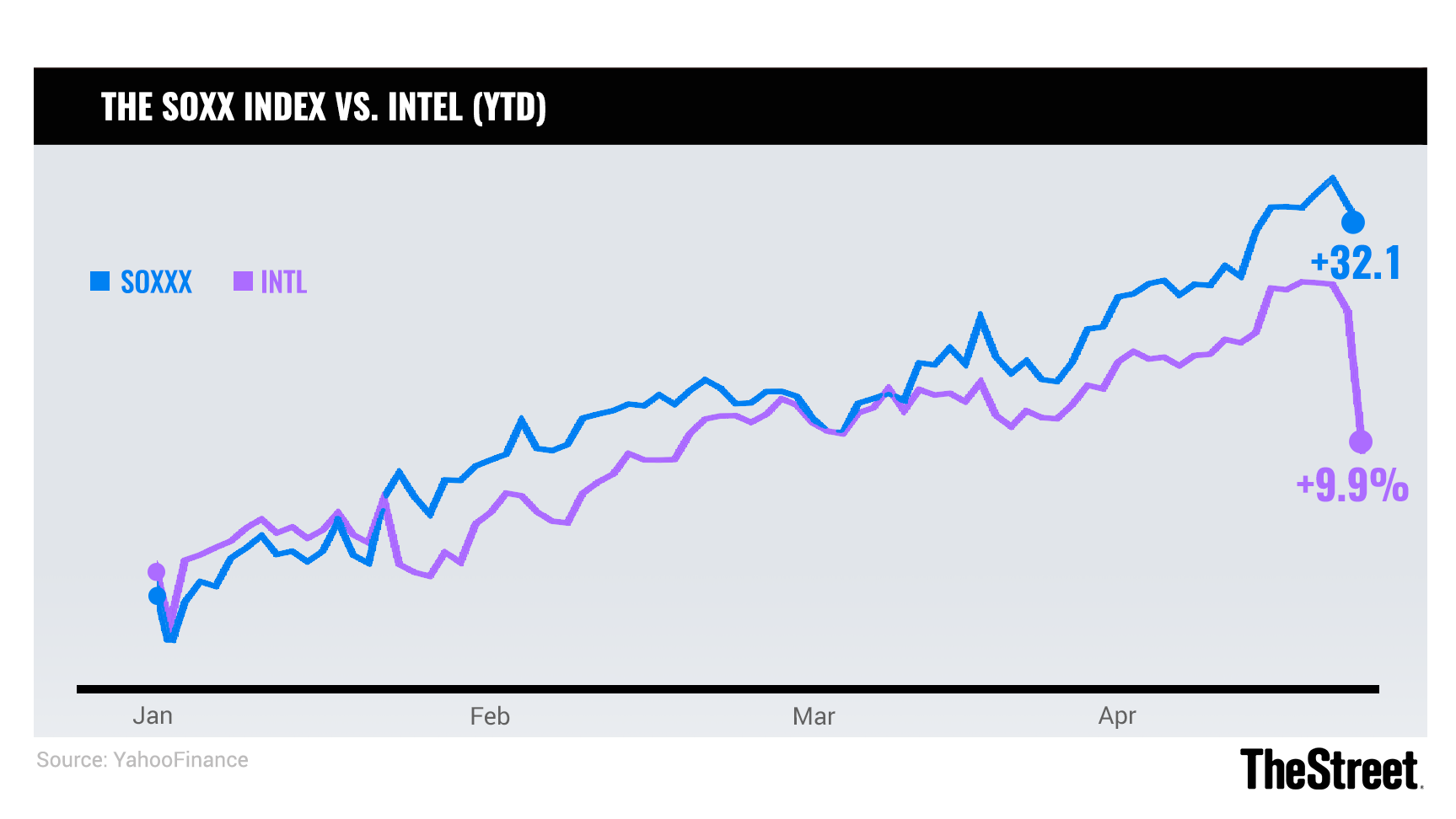 While Intel beat analyst estimates on the top and bottom lines for the first quarter of 2019, its forecast for the rest of the year is much less bullish. Newly named CEO Bob Swan noted that revenue is set for its first year-over-year drop since 2015, in the company's Thursday evening earnings release, and encouraged caution on overly optimistic turnaround theses.

"Our conversations with customers and partners across our PC and data-centric businesses over the past couple months have made several trends clear. The decline in memory pricing has intensified. The data center inventory and capacity digestion that we described in January is more pronounced than we expected. And China headwinds have increased, leading to a more cautious IT spending environment," Swan explained. "We've reassessed our 2019 expectations based on the challenges we're seeing."

Intel said it expects full-year revenue of $69.0 billion compared to estimates of $71.05 billion and the $70.8 billion record revenue realized in 2018. The new guidance represents a $2.5 billion cut to previous estimates pinned to a second-half rebound in memory pricing.

Full-year EPS guidance was also lowered to $4.35 per share, down about 5% year over year and $0.25 lower than Intel's previous forecast.

Chinese cloud players building up inventory as trade tensions intensified in late 2018 was blamed for much of the inventory glut that may take time to wade through in the near term.

"We see customers becoming more cautious in their buying patterns, with the most acute deceleration happening in China," George Davis commented. "Demand pressure is particularly evident in our data center business, where we are seeing a continuing inventory correction in enterprise and comms and capacity digestion among cloud service providers, who ramped consumption strongly in 2019."

Considering mainland China is Intel's largest market by revenue generated, the deceleration from triple-digit demand from the region in the third quarter of 2018 transitioning to a negative readout in the first quarter is a sharp hit to the company.

Such macro factors exacerbate the company-specific problems that Intel has sought to work through, factors that have seen it consistently cede market share to Advanced Micro Devices (AMD) in recent years.

"The CEO transition combined with the tough environment for both demand and competition is driving the early stages of structural change," Morgan Stanley analyst Joseph Moore advised clients. "None of that will be painless."

Additionally, one of the key bright spots for the company is the shift to 5G, which has been a source of trouble for the company lately as it revealed it was essentially pushed out by Apple (AAPL) in favor of Qualcomm (QCOM)  amid 5G delays, rather than leaving on its own volition.

The company touted extraordinary growth by 2022, but that does little to assuage concerns of "dead money" in 2019.

Still, the company was confident in a normalization of supply and demand factors for memory later in the year, following the lead of many peers including Micron (MU) , Texas Instruments (TXN) , SK Hynix (HXSCL) , and Taiwan Semiconductor.

Further, few question the importance of chips in the horizontal digitization of the future economy, a future underwritten by semiconductors.

If Intel can continue to be a key player in this "fourth industrial revolution" and hit its stride for a turnaround on time, investors could be poised to pounce on a pullback in the shares.

"Intel's attempts to generate growth beyond its core PC/Data Center markets have yielded mixed results in the past, with investors therefore viewing the latest strategy with understandable skepticism," Deutsche Bank analyst Ross Seymore said. "However, with new permanent CEO Bob Swan installed in 1Q, we remain impressed with Mr. Swan's strategic vision for the company and believe a more "offensive" Intel has the potential to deliver upside to both earnings and valuation."

J.P. Morgan analyst Harlan Sur was inclined to agree, regarding the tempered guidance as an opportunity to get in at a reset point rather than time to run away.

"While investors may be skeptical, the team's visibility toward second half inflections is improving with inventory in China being consumed, hyperscale cloud spending build plans becoming clearer and supported by a strong upgrade cycle of Cascade Lake products. Moreover, the team is well positioned with its client product lineup for the second half, including the 10nm Ice Lake CPUs for notebooks," Sur said.

Investors will certainly welcome the release of the company's 10nm chips later this year after delays since 2015 provided AMD an opportunity to gobble up share in their absence. It should also give the company time to focus on its 14nm chips to avoid a similarly slow release.

"Despite near-term challenges, we expect Intel's 'data-centric' business, led by DCG, to deliver outsized growth over the midterm," he added. "We would be buyers of INTC shares on weakness."

Still, there remain many questions to be answered that should promote caution on simply expecting a stock rebound any time soon and if the company can be trusted with its turnaround timeline and a majority of analysts tempered price targets on the expected pain still ahead.

"I think it's whether there really is data center weakness because that was where he really identified that things were wrong, considerable drop off much more than I thought. Much more than anyone thought" Action Alerts PLUS portfolio manager Jim Cramer commented. "More questions than there were answers last night. And believe me, I have made a ton of calls on this and I still don't know the answer."

The shares have continued to trend negatively in post-market hours as investors seek clarity on the myriad of issues remaining for the company.

An investor day is scheduled May 8 and may be the next best chance for Swan to reverse the course for the company's stock.

Get an email alert each time I write an article for Real Money. Click the "+Follow" next to my byline to this article.
TAGS: Earnings | Investing | Stocks | Semiconductors & Semiconductor Equipment | Software & Services | Technology | Technology Hardware & Equipment | China | Analyst Actions | Stock of the Day

Love Starts to Bloom in the Face of Recession

The company behind a popular dating app begins to see its shares make a move, so to speak.

UnitedHealth Has Recovered Above a Key Indicator

How Does Levi's Size Up Ahead of Earnings?

Cytokinetics Is Showing Its Muscles on the Charts

In light of the stock market's weakness, CYTK has shown impressive strength.