Shares of Intel Corp. (INTC)  are sharply lower Friday as traders and investors react to the company's quarterly results. A revenue beat and in-line profit figures were offset by a surprise decline in its Data Center Group. A fundamental downgrade by a sell-side investment firm is also weighing on the stock.

In the updated daily bar chart of INTC, below, we can see that the shares recently stopped short of the underside of the declining 200-day moving average line. The gap lower has broken the September lows and put prices in position to test the August lows and maybe even the March lows.

While the On-Balance-Volume (OBV) line shows some improvement from August the longer-term pattern from February has been bearish. The Moving Average Convergence Divergence (MACD) oscillator is crossing to the downside for a take profits sell signal. Unfortunately I do not see any profits to take.

In the weekly bar chart of INTC, below, we can see that a rally in the stock stopped at the underside of the declining 40-week moving average line. Friday's decline is not plotted yet.
The weekly OBV line looks positive but that could be a problem as it could mean that recent longs could be stuck with bad positions. The MACD oscillator has crossed to the upside for a cover shorts buy signal.

In this daily Point and Figure chart of INTC, below, we can see that the software is projecting a possible downside price target in the $41-$40 area. This would not be a good development as it would break the lows going back several years. 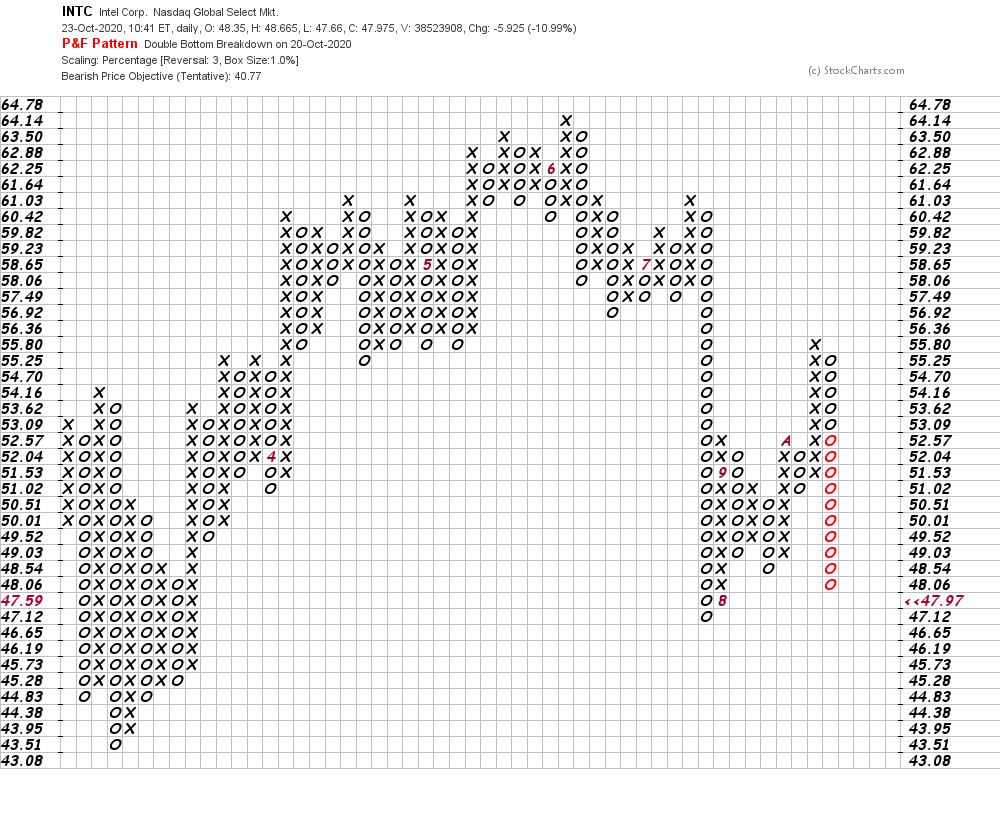 Bottom-line strategy: INTC could hold or even bounce but the weight of evidence is bearish and the risk is for further declines. Avoid the long side.
Get an email alert each time I write an article for Real Money. Click the "+Follow" next to my byline to this article.
TAGS: Earnings | Investing | Stocks | Technical Analysis | Semiconductors & Semiconductor Equipment | Technology