Shares of Intel Inc. (INTC) is declining Friday as traders and investors show their disappointment in the company's fourth-quarter 2020 numbers and guidance. Shares rose initially Thursday evening when the results were released but traders have been of a different mind so far on Friday.

Let's check out the charts and indicators for some guidance.

In the updated daily bar chart of INTC, below, we can see that the shares gapped higher earlier this month and then stabilized at the higher price level. On Thursday the shares closed at a new high for the move up just ahead of the earnings release. Risky. Prices are under selling pressure now and weakness under $57, which is the recent intraday support, is likely to precipitate further declines.

The On-Balance-Volume (OBV) line shows a rise from early November telling us that buyers of INTC have been more aggressive ahead of the report. Some of these recent longs are likely to turn from buyers to sellers. The Moving Average Convergence Divergence (MACD) oscillator was bullish but today's price action should start to narrow the two moving average lines that make up the indicator.

In this weekly bar chart of INTC, below, we do not want to look over the indicators but rather want to point out that several of the rallies over the past three years have ended very quickly. Maybe this is yet another example.

In this daily Point and Figure chart of INTC, below, we can see that the shares briefly reached and exceeded the $60 price target. A trade at $56.92 is likely to weaken this chart. 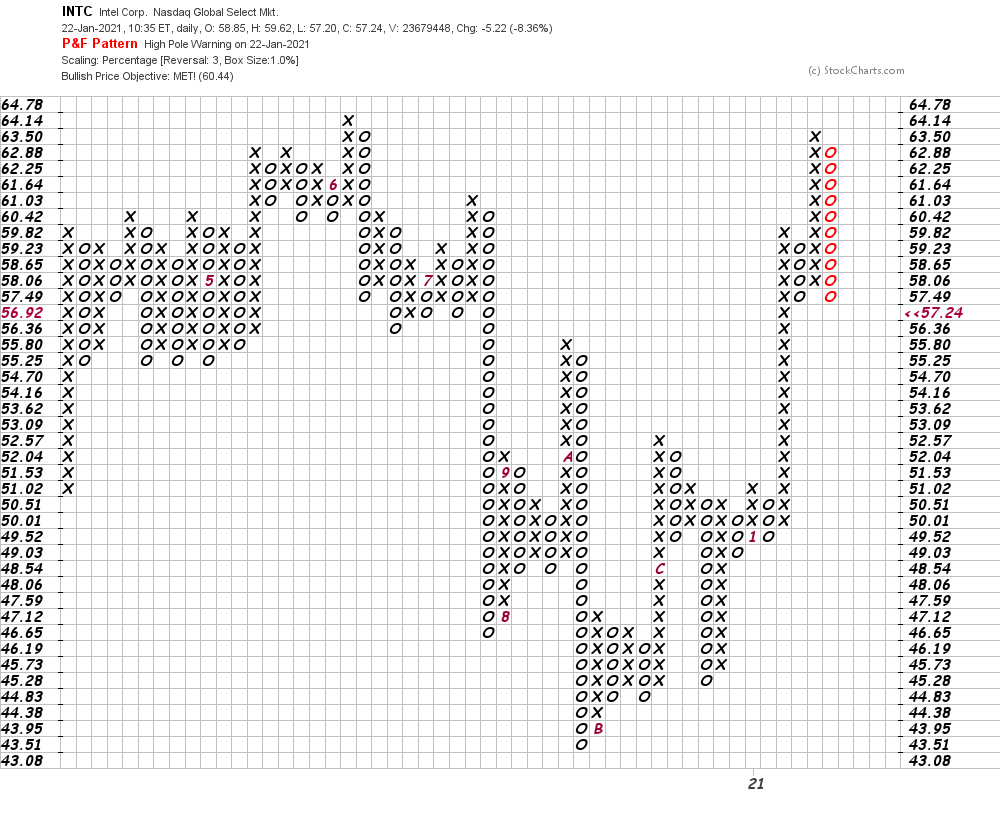 Bottom-line strategy: The price history shows that when INTC turns lower you need to get out the way.
Get an email alert each time I write an article for Real Money. Click the "+Follow" next to my byline to this article.
TAGS: Earnings | Investing | Stocks | Technical Analysis | Semiconductors & Semiconductor Equipment | Software & Services | Technology | Technology Hardware & Equipment