Really ugly. Surprising? Honest answer... not really. Stunning? Maybe. Even as a plethora of domestic macroeconomic data hit the tape for the month of March well below "consensus", it only becomes too obvious that those whose opinion comprises this consensus view are flying just about as blindly in this environment as is everyone else. Oh, and we know as well that it's not just March that was so awful. April is worse.

All on the same day, it became all too clear just how deeply the U.S. economy had fallen into contraction in March 2020. Headline Retail Sales showed the greatest month-over-month decline in the history of that series (Dating back to 1992, despite incredible increase witnessed for the purchase of food and groceries going into this economic shut-down), while data for Industrial Production put the largest monthly contraction to the tape since the nation starting ramping down from the wartime (WW2) economy.

As we mentioned, as bad as March was, April appears to already be far worse. Early month economic surveys such as the Empire State (New York) Manufacturing Index, and the NAHB Housing Market Index printed at historically poor levels, and well below expectations. In the words of the Federal Reserve's own Beige Book, which covers the period ending April 6, economic activity "contracted sharply and abruptly."

Mentioned in that Beige Book anecdotal report was the massive loss of jobs and reduction seen in wages. On Thursday morning, the Department of Labor will once again release numbers for those who were able to successfully file for unemployment benefits since their last weekly report. The last three releases total nearly 17 million newly unemployed laborers. This morning we expect to see a rough 5 million individuals added to that unfortunate toll.

Of course on what was a decisively "down day", financial markets reacted to the deeply negative macro. Financial markets reacted to just how large the loan losses might be that U.S. banks are apparently bracing themselves for across the corporate, household, student, auto and credit card landscapes, oh and financial markets also reacted to the failure of WTI Crude front month futures to hold the $20 per barrel level on Wednesday. By the way, that battle around the $20 level has continued all night long, and broader equity index futures do seem to be reacting to each skirmish.

The positive take-away from Wednesday action, at least for me as a trader, was the obvious lack of institutional participation on the sell-side. Now, of course we cannot take this for granted as there will be less tolerance for the potential to lose short-term trading profits after what these portfolio managers have just been through. That said, they have for the most part, collectively held their fire. As the S&P 500 backed up 2.2%, and the Nasdaq Composite surrendered 1.4%, trading volume trailed off fairly dramatically on Wednesday from Tuesday's generally positive levels.

Get this... trading volume, which I see as a proxy for institutional participation, not only dropped significantly at both of New York's primary exchanges, but also from an index-centric perspective... landing well below (as in double digits, percentage-wise) aggregate 50-day simple moving averages for constituent member firms (in aggregate) for the S&P 500, Nasdaq Composite, Nasdaq 100 and even the small-cap Russell 2000 -- that index suffering a terrible beat-down (-4.3%). In other words, as observers noted a dramatic and highly negative decline in economic activity that forced keyword-reading algorithms to hit the markets from above, enough portfolio managers faded that move to lessen its impact, at least technically. I mean, the fundamentals are what they are. There is no way to sugarcoat that. The weekly Initial Jobless Claims report can change everything.

Why Would 'They' Not Run?

I'll admit, I have shaved a few winners this week. Then again, that was Tuesday. Wow, had to look it up. Just found out that I did not execute a single trade on either side yesterday. How odd that one can watch a screen all day and not realize that one had not traded anything. Oh, there were orders placed on both sides of several stocks at perceived "pick-off" prices, but alas... there were no algorithms willing to walk into anything that I had set up.

So, why would these fund managers not take the short-term money and run? It's about re-opening the economy, really. We see a number of European nations now taking baby steps. We know that China has made more significant moves, though I think our better comparisons are made with more open economies that also have a freer press. The president's task force press conference was decidedly more upbeat on Wednesday evening. Some national hot-spots appear to be at least plateauing even if it seems trouble could be brewing where it has not before.

I did hear Vice President Pence mention during last night's event that 24% of the nation's counties have yet to report their first confirmed case of this coronavirus, when mentioning places that maybe did not have to be closed as tightly as are others. I did think to myself ... I wonder what that must be like for those people. They might not even understand why we're shut down. Oh, what a luxury that would be.

Anyway, I almost got off track there. If the nation is going to go for it, and groups of states are going to consult with each other and also appear to be trying to set up a re-opening, then by golly, with the Fed and the U.S. Treasury Department doing all that they have done and prepared to keep on doing, then unless calamity strikes (we know it can)... it looks like we are going to, as a nation, try.

Two seconds on the clock, at the one yard line, down by three. Everyone expects the head coach to send in the kicker. Just one thing. He leaves the offense on the field. It all depends on the behavior of this virus, and then it all depends on testing broadly enough to put people at ease in accomplishing ordinary tasks that put them in the same space as others.

Oh, we'll hear from Abbott Labs (ABT) this morning, probably before you read this article. Wall Street is looking for EPS of $0.54 on revenue of $7.27 billion. Both numbers would be in contraction from the same quarter one year ago. This quarterly earnings release will not be the most important thing that this company does today.

The company has come up with a serology (antibody) test that will determine if an individual has had, and recovered from a previous infection of the coronavirus that causes Covid-19. These tests will start to ship as early as today (Thursday) and by the end of this week, the firm expects to have distributed one million of these tests. The firm expects to have shipped four million tests by the end of April and to be able to screen 20 million tests a month by June. This is in addition to the other two tests, one of the sub-15 minute turnaround variety, where this company checks for a current infection. Although I was already long the name, this is why I will stay long this name.

They could lay a dud on earnings. The market might sell the stock. Maybe there will be hiccups in distribution of these tests. I don't care. This Illinois-based firm is fighting for America, and that's a fight I want to support.

You kids watching Zscaler (ZS) ? Holy Toledo, Batman. Talk about a breakout. I'd like to brag about my skillful exit that I made earlier this year as the share price collapsed. Truth is that I did not sell the final tranche until late February and thought I was awesome in doing so. If only my re-entry had been nearly as neat and tidy. I am long this name and the shares are trading nicely higher, but the quarterback did fumble that exchange. Could have, should have done a better job. 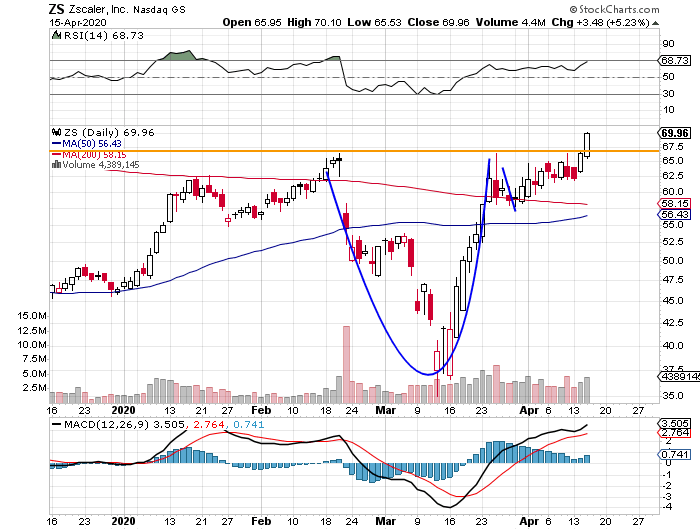 The drivers are two-fold for this name, which is not only outperforming the broader equity indices, but for the most part, cyber-security as an industry. One, as with many software firms, the company's sales are driven mostly by a subscription (recurring revenue) business model. The second, and this is the big one for now, is that as so many corporate employees have been forced to work remotely, and the need for cyber security at that level just soared almost on the hop. What Zscaler does fits that demand very well.

You see, for many years, corporations have relied upon VPNs (Virtual Private Networks) in order to provide security for employees that have to work remotely. This allows those employees to access a company's internal systems. Measures such as firewalls add to the security of these VPNs. Now, Zscaler provides a cloud-based security option that bypasses the need to set up a VPN. The product is known as ZPA or Zscaler Private Access. The share price speaks for itself.

We see the classic cup with handle formation created across so may charts as the current pandemic has put the squeeze on the U.S. economy. We also see resistance for ZS at the pivot close to $67 that lasted for about a week, and then broke out on Wednesday amid a weak tape, and sans any new firm-specific headline news. The move was purely technical.

(Abbott Labs and Honeywell are holdings in Jim Cramer's Action Alerts PLUS member club. Want to be alerted before Jim Cramer buys or sells those stocks? Learn more now.)

Get an email alert each time I write an article for Real Money. Click the "+Follow" next to my byline to this article.
TAGS: Economic Data | Economy | Indexes | Investing | Markets | Stocks | Technical Analysis | Trading | U.S. Equity | Coronavirus