Hey there little star. I've seen you before. I think. How I wonder what are you? Are you significant? No offense, I'm just the friendly neighborhood numbers guys. I'm all about pattern recognition. I've seen you over deserts. I've seen you through the jungle canopy. I've seen you glisten over the snow. Man, that was cold. I also saw you try to rally on Monday morning. I saw you try to build on that Friday strength, that strength an algorithmic reaction to better-than-expected job creation for November.

A week ago, we noticed that the broader indices, propelled by a few sectors reliant upon economic growth, had formed a bullish-looking island as positive trade talk had taken the narrative away from negative insinuation. A week later, on Monday, markets tried to build on that momentum, then sold off. The selling gained steam in the afternoon. Equity prices closed very close to the lows of the day. Trading volume printed slightly above 50-day moving averages for constituent companies of the broader equity indices.

Does that mean that we are witnessing an increase in selling at the institutional level? To some degree it does, when combined with the pressure experienced early last week. In other words, though market breadth was largely even on Monday, there does appear to me to be more of a willingness to take profits going into the year's final stages than there has been since early October. There is a willingness to distribute as opposed to accumulate. Winds shift. Worried? No. That's just me, though.

You see how Monday's action looks as a daily candle? (The Nasdaq Composite offers a similar look.) I'd like the wick of the candle to be a little longer for the purposes of illustration, but some might call the day a "shooting star", others an "inverted hammer." You know what the difference is between the two?

For one, the color of the candle, for another, where it happens on the chart. An "inverted hammer" is an up day occurring at the bottom of a trend. A "shooting star" happens near the top of the chart, and would be a down day indicating late pressure. You know what purely technical traders use these "shooting stars" for? Sell signals. That kid out on Wall Street about half a block away from the New York Stock Exchange in the shades with the cigarette permanently attached to his lip. He would call this a "sell signal." This is where short-term traders, protecting profits, probably using S&P minis as their investment vehicle, will get off the bus.

The FOMC will begin a two-day policy meeting on Tuesday. There will be no new news from that quarter for another 35 hours or so. Most of the week's high-impact type macroeconomic data points remain weighted toward the end of the week. Mexican President Manuel Lopez Obrador said on Monday that Mexican senators had informally agreed to the latest modified version of the USMCA trade deal (NAFTA 2.0). At the same time, the AFL-CIO hosted a conference call with constituent leaders regarding the proposal.

Does the USMCA finally find its way to an up or down vote on the floor of the House of Representatives? At the same time that House Democrats are reportedly drawing up at least two articles of impeachment? Will that finally impact markets? The fact is that they may actually have to allow this vote to proceed in order to appear to have carried on with their legislative responsibilities while otherwise distracted.

All this "other news" really just serves to draw our attention while we await some kind of presidential decision on the next tranche of tariffs targeting Chinese imports to the U.S. ahead of this Sunday's self-inflicted deadline. This tranche, mind you, will include laptops, smart-phones, footwear, apparel, and more. In other words, the worst has been saved for last. This time, for the first time, the consumer gets hurt. Can't let that happen, right? (When was the last time that you did something for the first time? Just wondering.)

Just why did U.S. equity markets show weakness early last week? President Trump openly considered putting off any Phase One trade deal until after the November 2020 U.S. election. Both houses of the U.S. legislature have passed human rights related legislation based on events in Hong Kong and the House has passed a bill targeting abuse in Xinjiang province that is headed to the Senate. President Trump has already signed the merged Hong Kong bill.

In response to these events as well as bans against U.S. companies doing business with certain Chinese companies such as Huawei based on national security concerns, Beijing has ordered state offices to phase out the use of foreign technology over the next three years. In other words, neither side seems extremely desperate to make a deal. Despite a fourth consecutive month of declining Chinese exports, both nations have in their most recent data, shown some ability to adapt... some kind of domestic bottom.

What happens to debt and equity markets should President Trump simply suspend this last tranche of tariffs, but there is no deal, just more talk? Could give a lot back, only to put it back on a few weeks later as Santa arrives, January money pours in, and perhaps trade talks warm up again just to give a seasonal rally some beer muscles. Ahead of fourth quarter earnings that print in contraction. Yet, again. JP Morgan (JPM) and Citigroup (C) step to the plate on Tuesday morning, January 14.

Just where do we stand about a month out from fourth-quarter earnings season? At this point, according to FactSet, who you know I follow for such aggregate data, Q4 earnings growth for the S&P 500 is expected to print down 1.5% year over year. If realized, this "growth" would amount to a fourth consecutive quarter of earnings contraction, extending the current recession across that metric. The S&P 500 currently trades at 17.6x forward earnings, well above the five-year average of 16.6x. But bear in mind that all environments are different in terms of policy. That's fiscal, monetary and regulatory. This means as I have relayed many times that historical valuation metrics are meaningless in determining anything. Price may or may not be truth, but it is most certainly fact, and facts are what we must live with and adapt to.

Earnings growth is still expected for every quarter of 2020, but that's kind of like guessing that some random child you might not know likes ice cream. That's simply a matter of probabilities. Going back to fourth-quarter expectations, sales across the S&P 500 are expected to print at actual growth of 2.6%. As the season draws closer, expectations for revenue generation are in the greatest decline from where they were three months ago for the Energy and Materials sectors, while Health Care remains near the top in terms of earnings growth, sales growth, all while that sector trades at just 15.7x forward-looking earnings versus a five-year average of 15.8x.

So, Sarge... you're saying that Health Care as a sector should probably execute at a high level during a time of uncertainty, and due to the weight of being a political football is likely under-valued? Precisely. That is, unless you think folks will stop aging or getting sick. 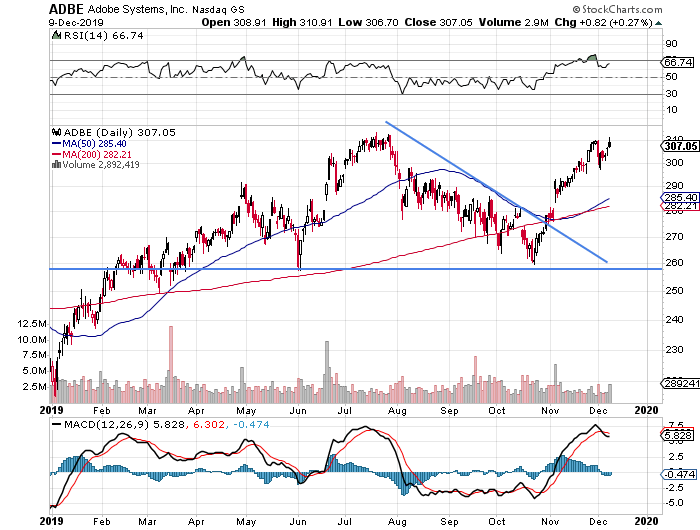 Remember this chart from last week? Well, we did in fact add that handle we talked about. The shares failed at pivot. Again. I am not going to puke my long, as I am a believer in Adobe, but beware, earnings are due for this name on Thursday afternoon. After the Fed. After the ECB. Maybe after articles of Impeachment make the rounds. Certainly after more trade headlines. In other words there is risk, and when there is risk, profits are taken. ADBE is up 36% year to date. My target remains $355. That said, we don't have any John Waynes here, buckle your chinstrap.

Late Monday, MongoDB reported adjusted EPS of -$0.26 (a beat) on revenue of $109.44 million. The revenue number was good enough for annual growth of 52.5% and also beat expectations. The headlines are this. Subscription growth printed at 56%. The firm raised guidance for both earnings and sales for both the fourth quarter and full year. That's why the shares are popping.

These shares are trading above $142 in the very early morning pre-opening session. I did come in long an entry level sized position. I am certainly not going to add at these prices. My thought is this. I'll take the pop. I'll watch the 200-day SMA. If this thing even thinks of testing the $139 level, I am out of here.

The Fed remains in blackout through Wednesday afternoon.

Get an email alert each time I write an article for Real Money. Click the "+Follow" next to my byline to this article.
TAGS: Earnings | Economy | Indexes | Investing | Markets | Politics | Stocks | Technical Analysis | Trading | World | U.S. Equity