While market breadth for the Nasdaq deteriorated Tuesday, the rest of the data saw some improvement. Meanwhile, psychology moved in an encouraging direction as the crowd became more cautious as insiders stepped up to the buy window.

Indeed, the consolidation we had been anticipating may have occurred while psychology data has improved to the point that we now feel it is appropriate to shift our near-term macro-outlook for equities. 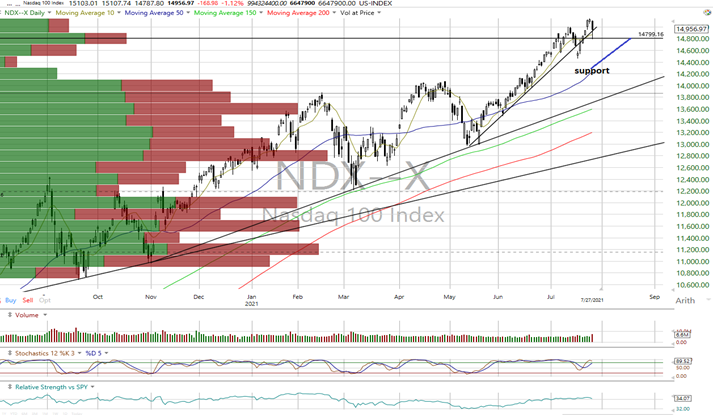 All the major equity indices closed lower Tuesday with negative internals on the NYSE and Nasdaq as volumes dipped from the prior session.

The only technical event of importance registered was the Dow Jones Transports closing below support as well as its recent downtrend line, thus turning negative.

The S&P 500, DJIA, Nasdaq Composite and Nasdaq 100 (see above) remain in uptrends and successfully tested support while closing at their uptrend lines.

The MidCap 400 and Value Line Arithmetic Index remain neutral with the Dow Transports and Russell 2000 negative.

Market breadth finds the cumulative advance/decline lines for the All Exchange and NYSE neutral with the Nasdaq's turning negative.

The McClellan 1-Day Overbought/Oversold oscillators for the Nasdaq are oversold with the others staying neutral (All Exchange: -46.27 NYSE: -34.78 Nasdaq: -53.33).

The Rydex Ratio (contrarian indicator), measuring the action of the leveraged ETF traders, remains bearish, lifting to 1.39 as they continue their leveraged long exposure.

However, this week's contrarian AAII bear/bull ratio (27.3/35.67) and Investors Intelligence Bear/Bull Ratio at 16.7/53.1(contrary indicator) improved, both seeing a drop in bulls and rise in in bears as the crowd became more fearful.

Also, the Open Insider Buy/Sell Ratio finally saw insiders finally step up to the buy window at 45.3, a notable improvement, in our opinion.

Tuesday's decline resulted in only some slight damage while the psychology data shifted to the point worthy of our altering our near-term macro-outlook to "neutral/positive" from "neutral" as the consolidation we were expecting may have come to pass. However, selectivity may persist.