Three of the major equity indices managed to post new closing highs Thursday although these highs were achieved on negative breadth as the FAANG stocks were largely responsible for the gains.

While the charts remain constructive, some of the psychology levels have intensified their warning signals, notably the action on the part of insiders. 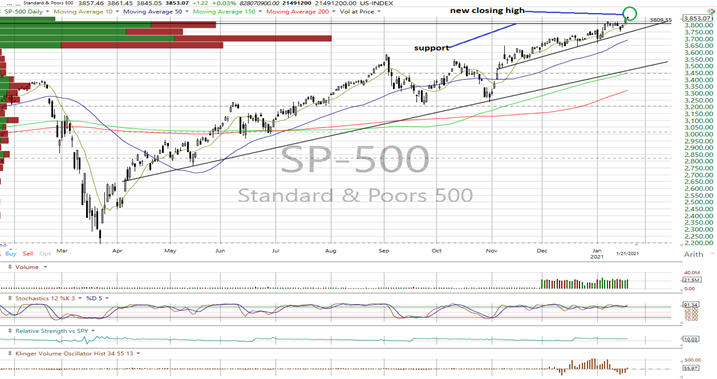 The major equity indices closed mixed Thursday with negative breadth on the NSYE and Nasdaq.

The S&P 500 (see above), Nasdaq Composite and Nasdaq 100 managed to post new fractionally higher all-time highs as the rest declined.

On the other hand, the Dow Jones Transports closed back below its near-term uptrend line and is now in a neutral trend as it has oscillated above and below said trend over the past few sessions.

As such, all the charts are in uptrends except for the Dow Transports.

Despite Thursday's negative breadth, cumulative breadth for the All Exchange, NYSE and Nasdaq remain positive and above their 50-day moving averages.

Yet the sentiment data continues to send cautionary signals. The leveraged ETF traders measured by the detrended Rydex Ratio (contrarian indicator) are still heavily leveraged long at a bearish 1.31.

Meanwhile, the Open Insider Buy/Sell Ratio has intensified as insiders selling activity increased to its highest point since prior to the selloff last March at a bearish 21.1. In our opinion, such insider activity should not be ignored, especially when the "crowd" is at very high levels of bullish sentiment as is currently the case. As mentioned earlier, these conditions presented themselves four times during 2020, three of which were followed by market corrections.

Also, this week's Investors Intelligence Bear/Bull Ratio (contrary indicator) remains on a bearish signal at 16.7/63.7, suggesting an excess of optimism exists on their part.

Valuation continues to appear extended. The forward 12-month consensus earnings estimate for the S&P 500 from Bloomberg rising to $167.94 per share, leaves its forward multiple at 22.9x, while the "rule of 20" finds fair value at 18.9x.

While the charts have yet to weaken, psychology data, and in particular insider activity, remain quite cautionary as does valuation. We remain "neutral" in our near-term outlook for equities in general.