Let's check out the charts of INSG to see if they can get hot in the months ahead.

In this daily bar chart of INSG, below, we can see that prices made a small double top in January and February and then declined sharply into the middle of March. From the March low prices quickly surged to new highs with a spike high in late April. INSG corrected into the middle of June but found support around the levels of the January and February peaks (prior resistance becomes new support). Prices are testing the rising 50-day moving average line but remain comfortably above the rising 200-day moving average line.

The On-Balance-Volume (OBV) line shows a good advance in March and April, telling us that buyers were more aggressive but we since have seen the OBV line give back that aggressive buying. The Moving Average Convergence Divergence (MACD) oscillator is crossing to the downside for a take profits sell signal, but this indicator is also not far above the zero line and a possible sell signal.

In this weekly bar chart of INSG, below, we can see that prices have made a big markup from late 2017. Prices are above the rising 40-week moving average line. The weekly OBV line shows a neutral pattern from April and suggests that prices could see further sideways price movement in the weeks ahead. The weekly MACD oscillator has been above the zero line for much of the past three years but now shows a weaker pattern.

In this Point and Figure chart of INSG, below, we used daily price data and here the chart is projecting a potential upside price objective in the $24-$25 area. 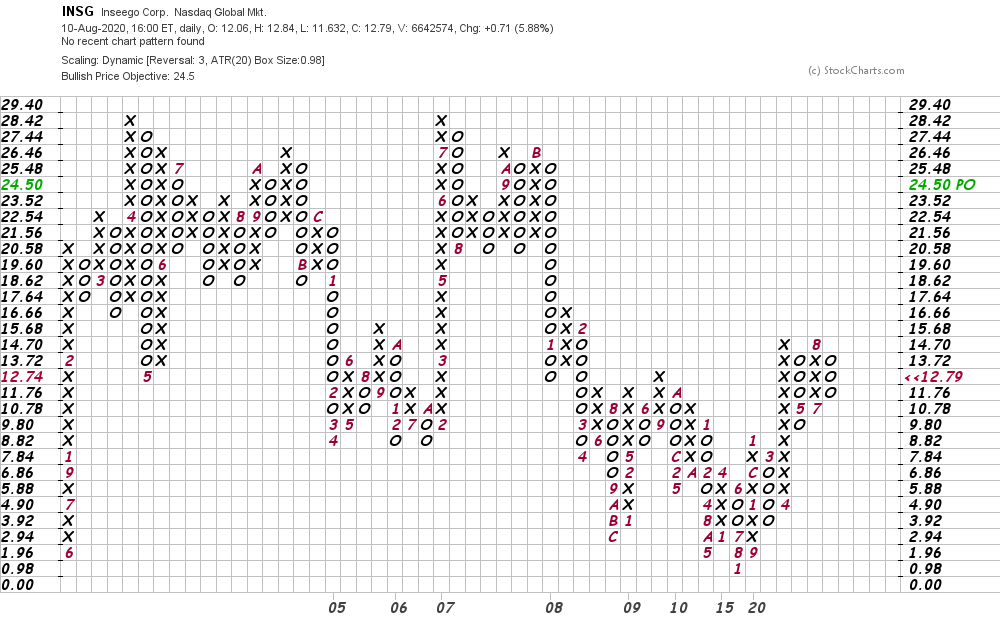 Bottom line strategy: INSG has been in a $9 to $15 trading range the past four months. Considering the movement of the OBV line I would anticipate further sideways price action. Eventually INSG should break out on the upside. Traders should wait for that breakout over $15 before committing capital. The $25 area is the price target for now.

Get an email alert each time I write an article for Real Money. Click the "+Follow" next to my byline to this article.
TAGS: Investing | Stocks | Technical Analysis | Technology | Technology Hardware & Equipment | Telecommunications | Mad Money | Executive Interview | Telecom Services

Want a Break from Chip Stock Ugliness? Check Out This Biotech ETF and Stock

The SPDR S&P Biotech ETF is one of the better-looking charts on this trader's screen, as is an individual biotech name.