Fieldly said Celsius is not some fly-by-night supplement maker, but rather its products are clinically proven to burn calories and fat and it is riding the health and wellness trend. The proof is in the share price, Fieldly said, as shares of Celsius are up 374% for the year. Distribution is key in the beverage market and Fieldly said Celsius is building a national distribution network that includes Walmart (WMT) , Target (TGT) and CVS Health (CVS) .

Let's check and see what traders and investors think of the stock.
In this daily bar chart of CELH, below, we can see that prices traded sideways around $4 until May, when an uptrend got underway. Prices made an impressive rally percentage-wise into early August and then gapped higher and ran up further into the middle of the month before correcting. The correction is still going on. Prices have been trading sideways for about two months, but we can see that buyers have been stepping in when prices reach the rising 50-day moving average line. The 200-day moving average line also has a rising pattern.
The daily On-Balance-Volume (OBV) line shows an uptrend to the middle of August followed by a decline. The decline in the OBV line tells us that sellers have been more aggressive and we would assume that early buyers of CELH are taking their leave and their profits. The Moving Average Convergence Divergence (MACD) oscillator has been holding above the zero line in positive or bullish territory. A turn to the upside in this indicator would be a positive development.

In this weekly bar chart of CELH, below, we can see the long base around $4. This might be considered a line pattern because there is very little amplitude in the price movement. I believe the line pattern was first used by Charles Henry Dow in his now-famous editorials about the stock market. Prices have surged eight-fold from that base level before turning sideways. The 40-week moving average line is bullish, but the OBV line has turned sideways and the MACD oscillator has narrowed significantly.

In this daily Point and Figure chart of CELH, below, we can see that prices have made a large triangle formation. A triangle in an uptrend is typically bullish, but here the software is leaning to the bearish camp with a downside price target. 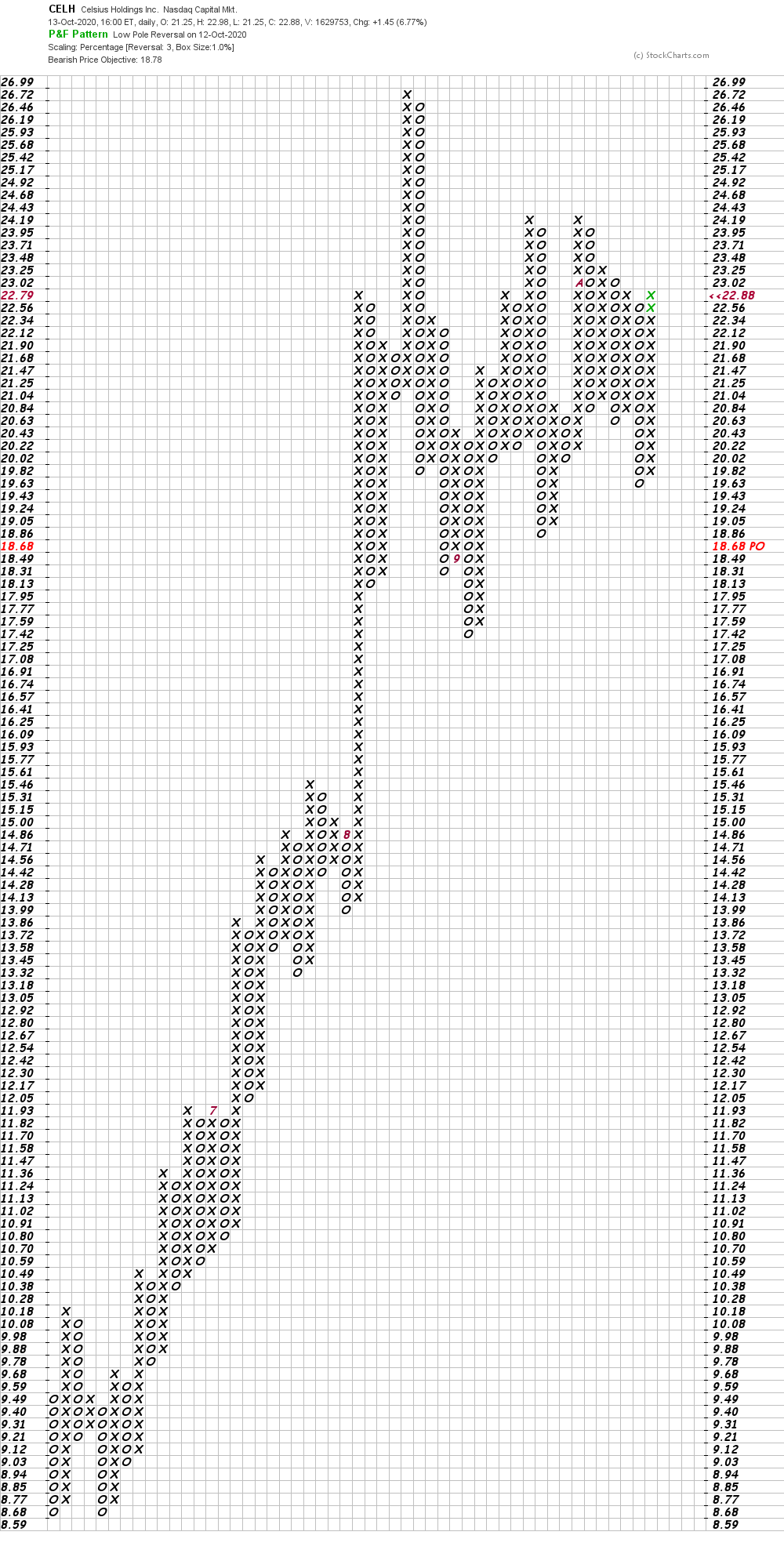 Bottom line strategy: If I held a stock from around $4 and saw it run up to $24 in a few months I would be reaching for my mouse to click on "Sell." Traders look like they have been taking profits since the middle of August. That looks like a good idea right now.
Get an email alert each time I write an article for Real Money. Click the "+Follow" next to my byline to this article.
TAGS: Investing | Stocks | Technical Analysis | Beverages | Consumer | Mad Money | Executive Interview | Real Money