While some index 50-day moving averages were violated to the downside Tuesday, none of the current near-term trends were altered on the charts, leaving them a mix of bullish, bearish and neutral. Still, there was some deterioration of market breadth that suggests selectivity is likely to continue.

The data finds the McClellan 1-Day Oscillators slipping back into oversold territory while insiders did a bit of buying on the session's weakness. Only the psychology data remains cautionary at this point.

Now let's dig deeper into the charts and data. 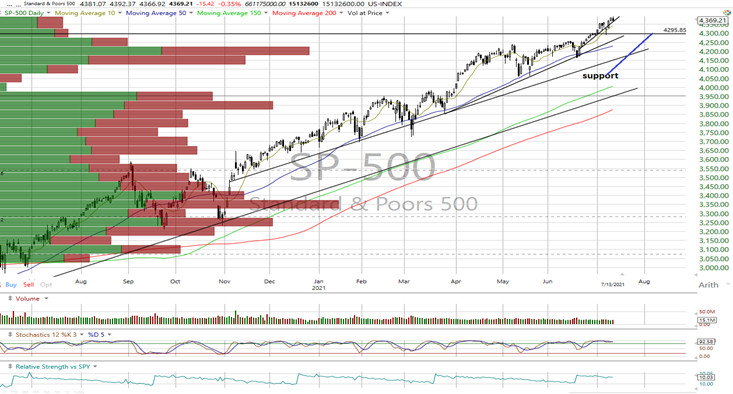 All the major equity indices closed lower Tuesday with negative internals on the NYSE and Nasdaq as volumes rose.

Despite all closing at or near their intraday lows, no violations of the current trends appeared. The S&P 500 (see above), DJIA, Nasdaq Composite and Nasdaq 100 remain in uptrends with the MidCap 400, Russell 2000, and Value Line Arithmetic index neutral and the Dow Jones Transports bearish.

However, the MidCap 400, Russell 2000 and Value Line index did close below their 50-day moving averages.

Market breadth suffered some deterioration with the All Exchange and Nasdaq cumulative A/Ds turning negative from neutral with the NYSE A/D unchanged at neutral. The Nasdaq A/D also closed below its 50 DMA.

The Rydex Ratio (contrarian indicator), measuring the action of the leveraged ETF traders, saw an uptick and remains bearish at 1.46 as they remain leveraged long.

This week's contrarian AAII bear/bull ratio (23.33/43.07) moved back into mildly bearish territory while the Investors Intelligence Bear/Bull Ratio (contrary indicator) saw a decline in bears and a lift in bulls, remaining bearish at 15.5/60.8. It continues to suggest an excess of bullish expectations, in our opinion.

The Open Insider Buy/Sell Ratio rose to 30.8 as insiders did some buying and remains neutral.

The forward 12-month consensus earnings estimate for the S&P 500 from Bloomberg lifted slightly to $199.11 per share. As a result, the S&P's forward P/E multiple is 21.9x with the "rule of 20" finding fair value at approximately 18.6x.

The 10-year Treasury yield closed higher at 1.42% and near resistance. We view support as 1.2% and resistance at 1.44%. The 10-Year yield remains in a downtrend from its March peak, which we view as a positive for equities regarding the valuation gap.

Tuesday's softness, while weakening breadth, left the chart trends unchanged and the data somewhat benign. As such, we are maintaining our near-term "neutral/positive" macro-outlook for equities.