The only thing keeping us near-term "neutral" in our macro-outlook for equities is the fact that the S&P 500 has already gained 70 points over the past six sessions and is gapping higher Monday morning. As such, we would look for potential tests of support for more attractive buying opportunities. 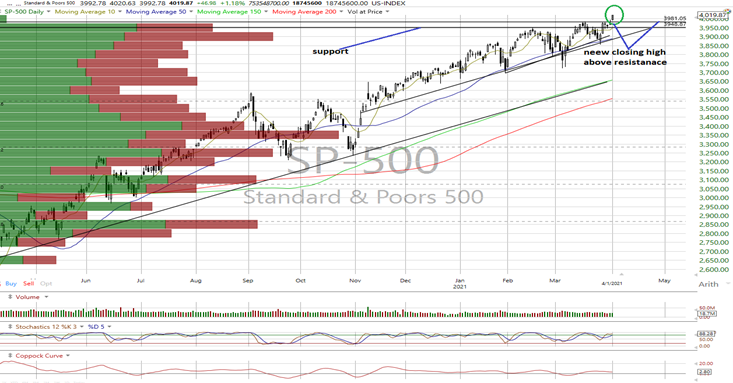 The S&P 500 closed above resistance to a new closing high.

Both the Nasdaq Composite and Nasdaq 100 closed above resistance and their 50-day moving averages, turning the Composite neutral from negative and the 100 positive from neutral.

The Dow Jones Transports made a new closing high while the MidCap 400 closed above resistance and is now short-term positive.

The Russell 2000 is now neutral after closing above its downtrend line while the Value Line Arithmetic Index closed above resistance.

So, all are in near-term uptrends except the Nasdaq Composite and Russell 2000 being neutral.

Cumulative breadth also improved with the A/D lines for the All Exchange, NYSE and Nasdaq turning positive.

No stochastic signals of importance were registered.

The Rydex Ratio (contrarian indicator), measuring the action of the leveraged ETF traders, actually dropped to 0.39 and remains neutral, a somewhat surprising move given the market strength.

The Open Insider Buy/Sell Ratio dipped to 34.0 and remains in neutral territory.

Valuation still appears extended. The forward 12-month consensus earnings estimate for the S&P 500 from Bloomberg is $175.00 per share, leaving the S&P's forward multiple at 23.0x, while the "rule of 20" finds fair value at 18.3x. We reiterate the valuation spread has been consistently wide over the past several months while the forward estimates have risen rather consistently.

The 10-year Treasury yield has slipped to 1.68%, but it remains in an uptrend with potential to test the 1.8% level with support at 1.55%, in our view. We continue to monitor it closely as it has been having rather significant influence on the equity markets of late.

We remain near-term "neutral" despite the positive action, as some retracement of the recent spike would be normal and afford more attractive buying opportunities.