All the major equity indices closed lower Tuesday with negative internals on the NYSE while the Nasdaq had negative breadth but positive up/down volume.

The charts saw violations of uptrends with some bearish stochastic crossovers added into the mix. However, in our view, the Nasdaq 100 and Nasdaq Composite suffered less damage with some large-cap growth names closing higher on the day. Whether this proves to be a potential rotation out of what we see as extended recovery names back into growth has yet to be clarified. Cumulative market breadth deteriorated as well.

The data finds some of the McClellan OB/OS Oscillators oversold, but not at what we would consider to be important infection levels, while investor sentiment continues to need a rebuild of the "wall of worry."

Now, let's take a closer look at the charts and data. 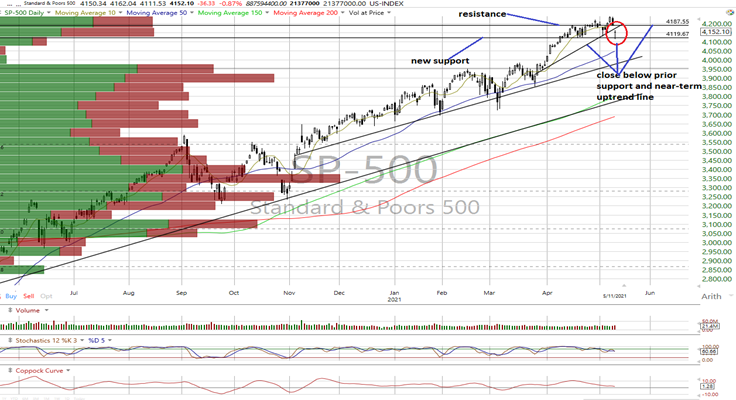 All the indices closed lower Tuesday with negative internals on the NYSE with the Nasdaq's mixed.

Trading volumes rose on the NSYE and dipped on the Nasdaq.

The charts saw the near-term uptrend lines violated to the downside on the S&P 500 (see above), MidCap 400 and Value Line Arithmetic Index with the DJIA and Dow Jones Transports flashing bearish stochastic crossover signals that have proved prescient on the other indices during the recent cycle.

So, only the DJIA and Dow Transports remain in uptrends as of the close with the S&P, MidCap and Value Line neutral. The Nasdaq Composite, Nasdaq 100 and Russell 2000 are in downtrends.

Cumulative breadth saw the NYSE's slip to neutral from positive with the Nasdaq and All Exchange staying negative.

Some of the McClellan 1-Day Overbought/Oversold oscillators slipped into oversold territory but are not at what we would view as extreme (All Exchange: -51.59 NYSE: -47.48 Nasdaq: -57.05).

Sentiment indicators still suggest an excess of bulls as the wall of worry needs repair, in our view.

The Rydex Ratio (contrarian indicator), measuring the action of the leveraged ETF traders, is still in bearish territory at 1.04.

This week's Investors Intelligence Bear/Bull Ratio (contrary indicator) saw a rise in bullish sentiment at 16.8/60.4 with the AAII bear/bull ratio at 23.1/46.3, as both remain in bearish territory.

The Open Insider Buy/Sell Ratio at 25.1 is neutral and has yet to signal significant insider buying interest.

Valuation still appears extended with the forward 12-month consensus earnings estimate for the S&P 500 from Bloomberg rising to $189.00 per share. This leaves the S&P's forward P/E multiple at 22.0x. The "rule of 20" still finds fair value at 18.4x. The valuation spread has been consistently wide over the past several months while the forward estimates have risen rather consistently.

The 10-year Treasury yield closed at 1.6.2% and near what we view as 1.63% resistance. Wednesday's hot CPI numbers could push the 10-year yield above resistance, which may prove problematic for the equity markets, in our opinion.

We are maintaining our near-term "neutral" macro-outlook for equities.

Get an email alert each time I write an article for Real Money. Click the "+Follow" next to my byline to this article.
TAGS: Indexes | Investing | Markets | Stocks | Technical Analysis | Value Investing | U.S. Equity