Stocks are selling off Monday after Friday's decline. In the runup to this we have repeatedly expressed our view that caution was warranted and that a correction was more likely while lowering our market outlook.

The charts of the major equity indices saw a number on bearish technical events Friday while market breadth continued to deteriorate.

On the data side, McClellan oscillators are close to being very oversold. However, the rest of the data has yet to suggest a culmination of the recent correction. 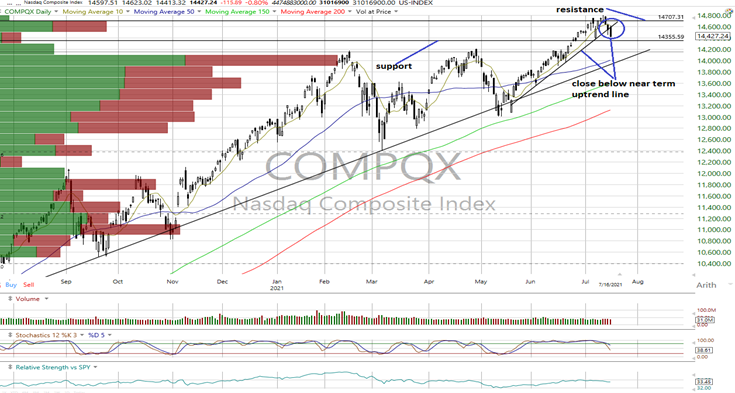 All the major equity indices closed lower Friday with negative internals on the NYSE and Nasdaq. Negative technical signals on the charts appeared as follows.

-- The Nasdaq Composite (see above) closed below its near-term uptrend line and is now neutral.

-- The MidCap 400, Russell 2000 and Value Line Arithmetic Index closed below support with all now negative.

As such, the near-term trends are positive on the DJIA and Nasdaq 100 with the Nasdaq Composite and S&P 500 neutral and the rest in downtrends.

Cumulative market breadth deteriorated further with the cumulative A/Ds for the All Exchange, NYSE and Nasdaq negative and below their 50-day moving averages. In fact, the Nasdaq's is just shy of breaking below its 200 DMA.

All the McClellan 1-Day Overbought/Oversold oscillators are nearing deeply oversold territory (All Exchange: -97.59 NYSE: -93.24 Nasdaq: -99.79). Readings below -100 are considered very oversold. However, in the current environment, we have yet to see other data supporting the potential for a correction climax.

The Rydex Ratio (contrarian indicator), measuring the action of the leveraged ETF traders, remains bearish at 1.14 as they remain leveraged long. We would ideally like to see them leveraged short.

Last week's contrarian AAII bear/bull ratio (23.33/43.07) moved back into mildly bearish territory while the Investors Intelligence Bear/Bull Ratio (contrary indicator) saw a decline in bears and a lift in bulls, remaining bearish at 15.5/60.8. It continues to suggest an excess of bullish expectations.

The Open Insider Buy/Sell Ratio remained a neutral 29.4 but still shows a lack of appetite for insiders to buy their own stock.

The charts and data still suggest caution is warranted for the near-term.