There were several shifts in near-term chart trends for the major equity indices Tuesday and some violations of support. Weak breadth was sufficient to turn the cumulative advance/decline lines negative while some further bearish stochastic crossovers were registered.

One possible silver lining, however, may be coming from the two of the McClellan OB/OS Oscillators that are now in oversold territory. Nevertheless, our concerns regarding the excess of bullish investor sentiment persist, as we believe the "wall of worry" is in need of repair. 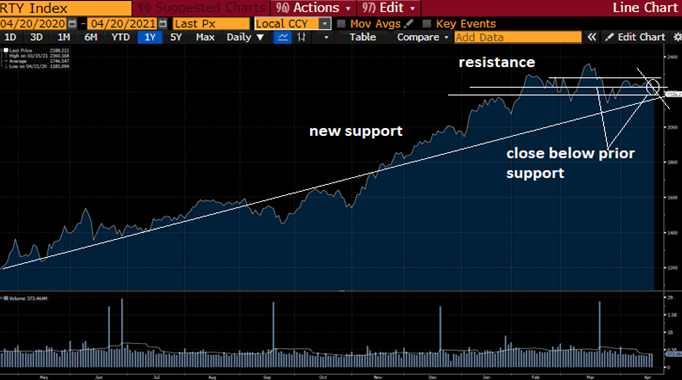 The major equity indices closed lower Tuesday with negative internals except for the Dow Jones Transports posting a gain and closing back above its near-term uptrend line.

The Nasdaq Composite and Russell 2000 (see above) closed below support.

Also, the MidCap 400 and Value Line Arithmetic Index closed below their near-term uptrend lines and are now neutral.

Bearish stochastic crossovers were generated on the Nasdaq Composite, which remains in an uptrend, as well as the MidCap 400 and Value Line index.

So, the S&P 500, DJIA, Nasdaq Composite and Nasdaq 100 remain in uptrends with the MidCap and Value Line neutral and the Russell 2000 turning negative.

Only the S&P, DJIA and Nasdaq 100 have yet to generate bearish stochastic crossover signals.

The McClellan one-Day Overbought/Oversold oscillators are now oversold on the All Exchange and Nasdaq (All Exchange: -61.6 NYSE: -43.12 Nasdaq: -74.44).

Yet the sentiment indicators remain cautionary. The Rydex Ratio (contrarian indicator) measuring the action of the leveraged ETF traders is in very bearish territory at 1.62 as they remain heavily leveraged long.

This week's Investors Intelligence Bear/Bull Ratio (contrary indicator) turned more bearish as well at 16.8/63.4 with the AAII a bearish 22.73/53.17. In general, bullish expectations have become excessive.

The Open Insider Buy/Sell Ratio is still bearish but lifted to 21.0.

The sentiment data suggest the need of some rebuilding of the "wall of worry."

Valuation still appears extended with the forward 12-month consensus earnings estimate for the S&P 500 from Bloomberg at $183.39 per share. This leaves the S&P's forward P/E multiple at 22.5x while the "rule of 20" finds fair value at 18.4x. The valuation spread has been consistently wide over the past several months while the forward estimates have risen rather consistently.

We are maintaining our near-term "neutral/positive" macro-outlook largely due to the current OB/OS levels as the earnings reports of individual companies, thus far, having a generally upbeat tone. However, positive participation is becoming increasingly selective.

Get an email alert each time I write an article for Real Money. Click the "+Follow" next to my byline to this article.
TAGS: Investing | Markets | Small Cap | Stocks | Technical Analysis | U.S. Equity | Indexes

This Dividend Retailer Might Just Knock Your Socks Off