Computer screening can unearth statistically cheap stocks. Then you need to vet them individually to see if their risk/reward characteristics are appealing.

The graphic below highlights Value Line's most recent top ten on their "Bargain Basement" stock list. The selections come from stocks which sport both low P/Es and cheap-price-to-net-working capital ratios.

Today's article will go through my analysis of United Natural Foods, Inc. (UNFI) , a stock I owned already. 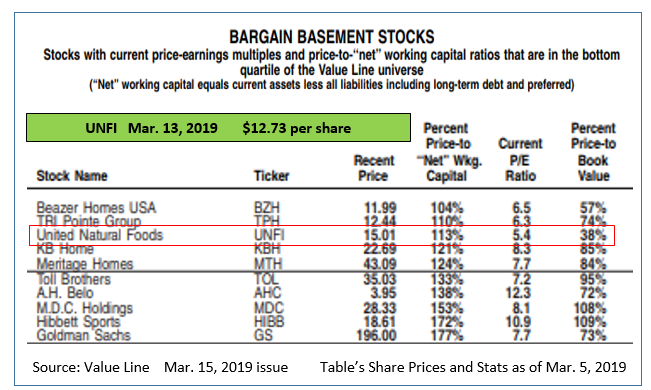 UNFI's management is convinced the acquisition will pay off handsomely once the disruption from the combination has been completed.

Prior to the purchase of SVU, UNFI often fetched pretty high multiples. From 2009 through 2018 its average P/E ran 20.6x. UNFI's seven "should have sold" moments (red-starred below) all came at north of 20x current year's EPS. 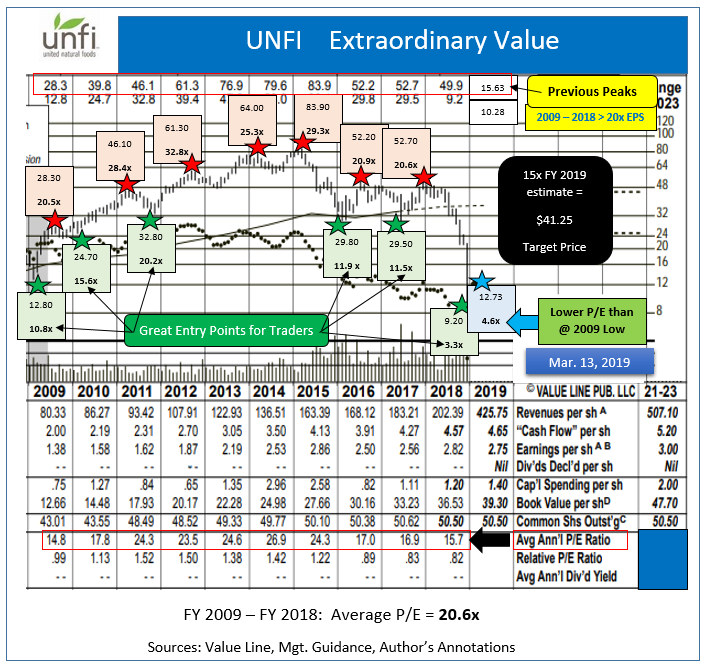 It's unlikely that UNFI will get back to a 20x multiple until the integration of SVU is complete and working well. Assume just a 15x P/E, though, and a 12-month target price north of $41 seems reasonable. Longer-term, if EPS creep higher and multiple expansion gets back to the old levels, a $60 goal is not out of the question.

Those targets might sound crazy with the stock under $13. It seems less absurd, though, when you note that UNFI's old annual peaks ranged from $46 to $83 during the entire period 2011 through 2018 on similar earnings levels.

Independent research from Morningstar is in general agreement. They assign UNFI a 4-star, out of 5, "buy" rating. In addition, Morningstar calls present-day, rather than year ahead, fair value as $24.52 per share. Simply returning to that modest level would lead to greater than 92% gains from UNFI's March 13 close. 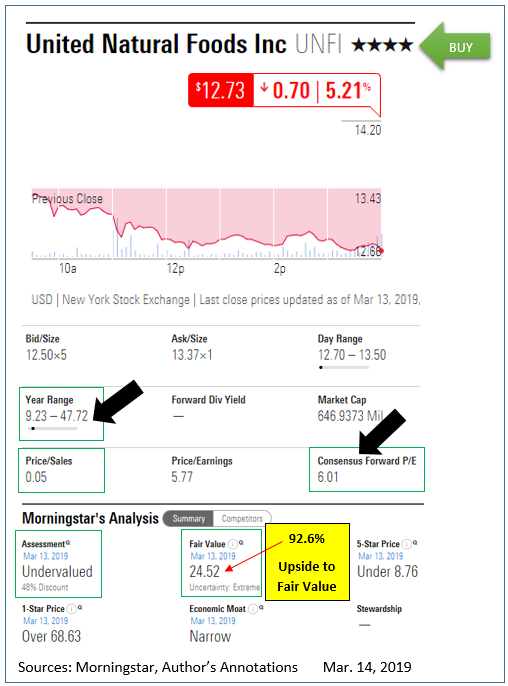 Join them in taking advantage of the market's irrational pricing of UNFI. The shares have a decent shot at a double, triple, or even a quadruple from their currently absurd price point.

Get an email alert each time I write an article for Real Money. Click the "+Follow" next to my byline to this article.
TAGS: Fundamental Analysis | Investing | Stocks | Food & Staples Retail |

Deutsche Bank Gets a Quantitative Downgrade to Sell

We are inclined to stand aside.