For his first "Executive Decision" segment of Mad Money Thursday evening, Jim Cramer spoke with Hans Vestburg, chairman and CEO of Verizon Communications Inc. (VZ) , to learn how the telecom giant is handling the work-at-home economy.

Vestburg said that Verizon's network is always changing and adapting, but over the past week, they've seen a 75% increase in gaming traffic, a 30% increase in VPN traffic, 20% in overall web traffic and a 12% surge in streaming.

Let's check and see if the charts of Verizon show any increases in the future.

In the daily bar chart of VZ, below, we can see a mixed picture with lagging indicators that are bearish and other indicators suggesting a rebound. VZ has been in a downtrend from the middle of December. The slope of the 50-day moving average line turned negative back in January and the slower-to-react 200-day moving average line turned negative this month. We can see a bearish death cross of these two averages last week and this signal does not look like it will be successful.

The trading volume has been very heavy the past four weeks and suggests we are seeing a shift in ownership as some investors liquidate and others use the available weakness to buy. The On-Balance-Volume (OBV) line shows only a modest decline since early February.

In the weekly Japanese candlestick chart of VZ, below, we can see a mixed picture. Yes, VZ is in a downtrend and below the declining 40-week moving average line.

Trading volume, however, has been heavier than average and the candles show that weakness below $54 is being rejected. The weekly OBV line is pointed down but the longer-term picture is still sideways.

The MACD oscillator only recently crossed below the zero line.

In this Point and Figure chart of VZ, below, we used daily price data. Here the chart is indicating a potential upside price target in the $69 area. 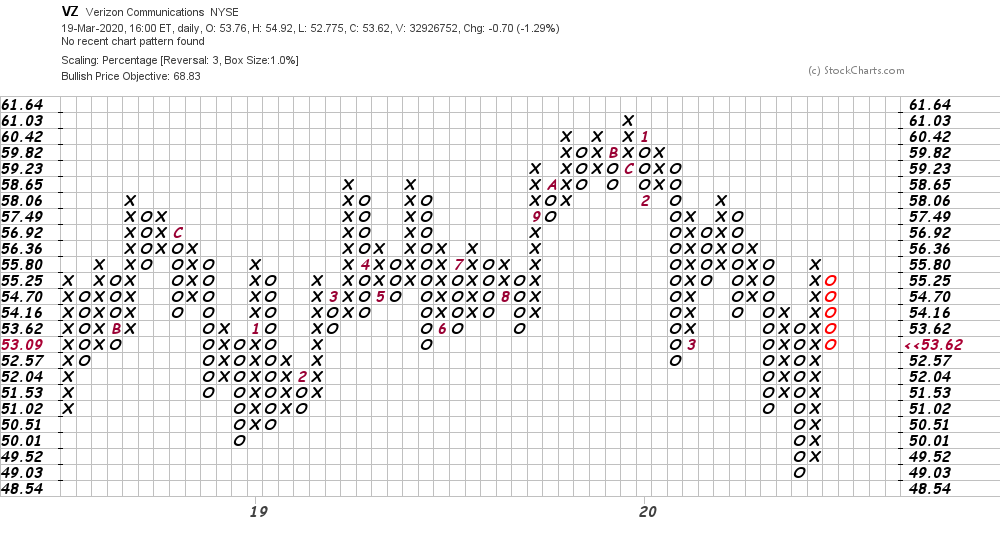 Bottom-line strategy: Risking a close below $51, seasoned traders could go long VZ at current levels and on available weakness. The $70 area is my price objective.