Is there panic out there? I do not see any signs of it.

But is there bearishness out there? I see plenty of signs of that. And there is a difference.

The former begets a whoosh in the market, as folks stumble over themselves to panic out of stocks. The latter is more like a give-up phase, where every day that goes by and stocks don't rally, folks slowly give up.

We see the Investors Intelligence bulls at 39.8%, the lowest since early December. A mere two weeks ago the bulls were a smidgen over 50%. That's a change. I fully expect when the American Association of Individual Investors' survey is released Thursday morning we will see the current 28% bulls fall to a lower reading. They were at 22.4% in mid-September. 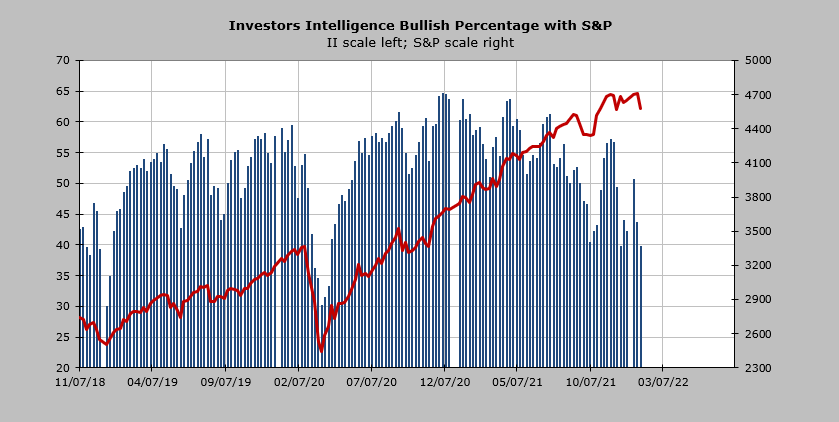 Then there is the equity put/call ratio, which is high on a regular basis. If we had panic, we'd see a reading shoot up into the 70s or 80s -- or even 90s. But that's not what we have. Instead, we have a persistence of readings in the 50s and 60s now, which means the 10-day moving average is flirting with that mid-50s area that has been the "too bearish" level for 18 months now.

Finally, we have the Daily Sentiment Index (DSI). The S&P has fallen to 47, but that's the middle of nowhere. Nasdaq's though is down to 33. We entered this week at 56, so you can see how in two trading days, it has fallen quite a bit. Clearly it will take a lot more to get it to single digits, but it is now well on its way. I would no longer call this neutral, but heading toward "too bearish." A reading in the 20s would solidify this view. As a reminder, a reading in the single digits is bullish. It was last in single digits in March 2020 when it got to 4.

The other interesting aspect of all of this is breadth. The McClellan Summation Index is heading down. That is bearish, because it means the majority of stocks are heading down. But when we look at the cumulative advance/decline line compared to the S&P we see that while the S&P is flirting with the early December lows and is a smidge under the late December lows, breadth is still above those two lows.

Now, because I think energy should come down, I don't have much hope that the breadth will stay this way-outperforming -- but for now breadth has not made a lower low and that in most markets would go on the positive side of the ledger. 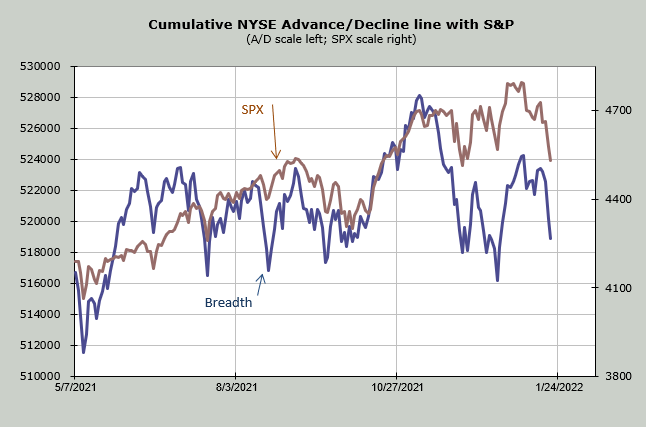 The New York Stock Exchange saw an increase in stocks making new lows from 299 to 318. The Nasdaq reading though contracted fractionally as new lows on Tuesday were at 817, and Wednesday they were at 772.

I suppose the best news is that I didn't see one bull on television all day on Wednesday. Heck, I don't even think I saw anyone terribly excited about the move in gold.

Get an email alert each time I write an article for Real Money. Click the "+Follow" next to my byline to this article.
TAGS: Investing | Stocks | Technology |