We entered this week, and I had a request for the market. I wanted to see a jumpy Volatility Index, a high put/call ratio, and some heavy downside volume, preferably with 90% of the volume on the downside. As Meatloaf once sang, "Two out of three ain't bad."

Before we get to those sentiment indicators, let's get to the nitty-gritty of the market itself. We broke the line!

We broke the coveted 50-day moving average that even the fundamental folks are focused on (Why? Shouldn't they concentrate on, oh, I don't know, fundamentals?). But did we get more oversold? Yes, we sure did.

My Overbought/Oversold Oscillator is most definitely oversold, with the New York Stock Exchange closing in on the July low and the Nasdaq closing on the August low.

But now I can add the McClellan Summation Index. It is awful in that it is still heading lower, but now it will require a net differential of positive 2,900 advancers minus decliners on the NYSE to turn it back up or at least halt the decline. At positive 2,000 it has stepped a toe into oversold territory.

As far as volume is concerned, most of the day the NYSE saw more than 90% of the volume on the downside, which I consider a plus, because until folks sell there is no cleanout and 90% of the volume on the downside tells me there was a lot of selling going on. We ended the day at 89%, so it's an "almost" (thus getting two out of three of my requests). However, the Invesco QQQ (QQQ) saw 75 million shares trade, which is the highest since May and as you can see high down volume tends to lead to a bounce. 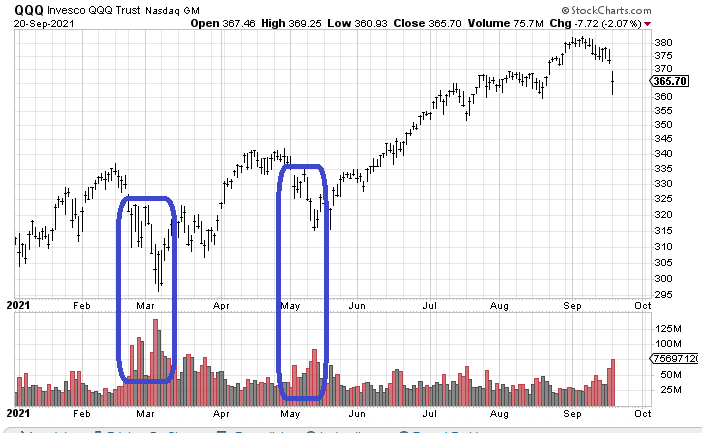 All summer, long I have complained about breadth, as it has not kept up and has lagged the big cap indexes. But Monday there was a change. Breadth did not lead, it did not make a lower low. That's the blue line on the chart, making a higher low vs. the August low. But notice that the S&P (brown) has made a lower low vs. August. That's a minor positive divergence.

Then there are the number of stocks making new lows. The NYSE saw 88 new lows. But remember the S&P traded lower than August and in August there were 118 new lows, so now here we have a positive divergence. 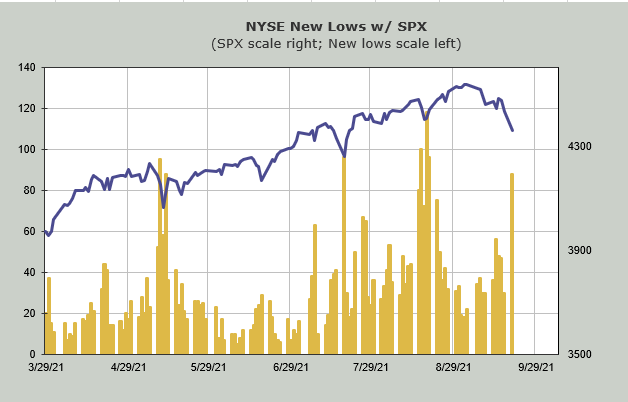 Nasdaq did not make a lower low than August, it came close, but did not achieve it. But here, too, there were far fewer new lows at 197 on Monday vs. 340 back in August. So for the first time in months, the number of stocks making new lows and breadth are not leading us to the downside. It seems the index movers finally saw some selling. 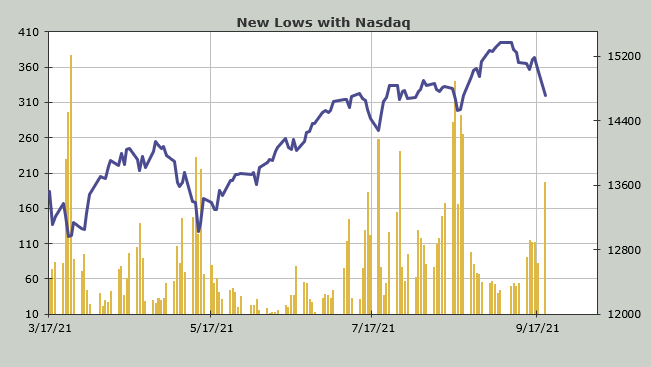 Finally there is sentiment. Noted above is the jumpy VIX. To that I can add the put/call ratio chimed in at 1.12, which is not only the first triple digit reading we've seen in this decline, it is the highest reading since late October last year, just as the market was making a low. So, I do think we get an oversold rally this week.

I'm willing to hold part of this through earnings but I'll likely shift to a call spread.

AMD's Lisa Su Does It Again: Here's My Trade

Su stated that she expects the market for PCs to be flattish for 2022, as she insinuated a lack of concern.